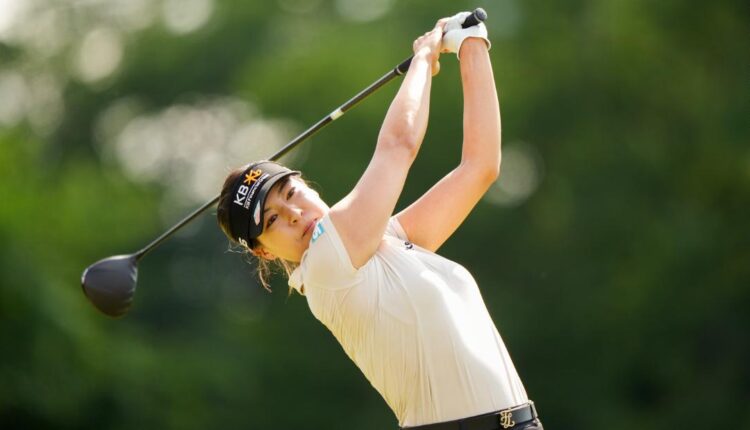 The 27-year-old shot a three-over 75 at a Congressional County Club in Maryland, finishing the Blue course in 11 more strokes than it had taken her through a record-breaking opening performance Thursday.

Having begun the day with a six stroke lead after shooting 69 Friday, four bogeys and a double bogey at the 16th hole saw the chasing pack halve the leader’s advantage, though Chun recovered well to close with back-to-back pars.

Chasing her third career major — and a first in six years — Chun said she was “so proud” of a finish that preserved her shortened, though still considerable, margin at the top.

“It was a little tough out there,” she told reporters.

“I’m so excited and looking forward to an exciting final round already. If it’s going to be too easy, then I feel it is boring, so I just want to enjoy another day tomorrow.

“No matter where I am, just I’m ready to make another good day or another good round if I can. It’s still another process, I believe, so just keep doing it,” Chun added.

Compatriots Hye-Jin Choi and Sei Young Kim join Lexi Thompson of the USA in spearheading the pursuing group after shooting 70, 71, and 70 respectively.

Having ended the opening round an eye-watering 10 shots off Chun, Thompson has gained seven strokes on the leader across the subsequent two days, spurred by an excellent five-under 67 Friday.

An 11-time winner on the LPGA Tour and a major champion at the Kraft Nabisco Championship in 2014, the 27-year-old is determined not to even glance at the leaderboard, leaving that responsibility in the hands of her caddie Will.

“I honestly have been trying not to watch leaderboard at all anymore,” Thompson told reporters.

“I’m sure he’ll [caddie] keep an eye on it. If I have to go for a shot, he’ll let me know. I’m just trying to focus on my game, my emotions.

“That’s all I can control, and whatever the outcome it is, it is.”

The first group is set to tee off at 8:29 a.m. ET Sunday, with Chun, Choi, and Thompson among the last to start their final rounds at around 10:30am E.T.