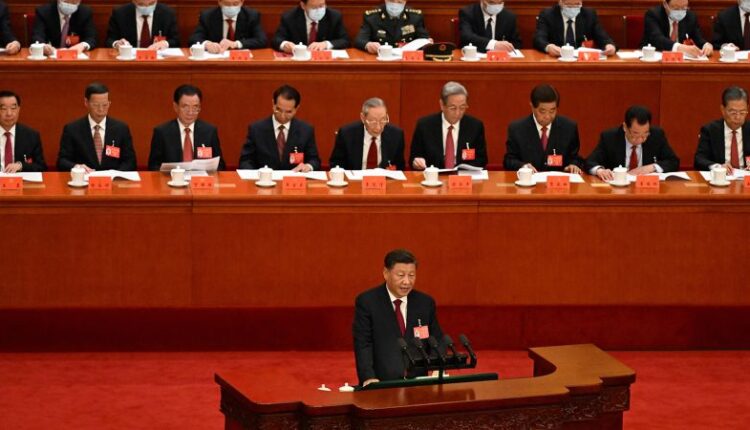 Even though China’s economy is beset by problems ranging from a real estate crisis to youth unemployment, Xi Jinping did not offer any grand ideas to set the country back on track during his two-hour opening speech at the Communist Party Congress on Sunday.

The Chinese leader is expected to secure an unprecedented third term in power at the week-long congress. Priorities presented at the political gathering of more than 2,000 party members will also set China’s trajectory for the next five years or even longer.

In his speech Sunday, Xi struck a confident tone, highlighting China’s growing strength and rising influence under his first decade in power. He also repeatedly underscored the risks and challenges the country faces, including the Covid pandemic, Hong Kong and Taiwan — all of which he claimed China had come away from victorious.

But experts are concerned that Xi offered no signs of moving away from the country’s rigid zero-Covid policy or its tight regulatory stance on various businesses, both of which have hampered growth in the world’s second-largest economy.

“Yesterday’s speech confirms what many China watchers have long suspected — Xi has no intention of embracing market liberalization or relaxing China’s zero-Covid policies, at least not anytime soon,” said Craig Singleton, senior China fellow at the Foundation for Defense of Democracies, a DC-based think tank.

“Instead, he intends to double down on policies geared towards security and self-reliance at the expense of China’s long-term economic growth.”

And China’s economy is in bad shape. Growth has stalled, youth unemployment is at a record high, and the housing market is in shambles. Constant Covid lockdowns have not only wreaked havoc on the economy, but also sparked rising social discontent.

Last week, two large banners were hung on an overpass of a major thoroughfare in Beijing, protesting against Xi’s Covid policy and authoritarian rule. It was a rare protest against the top leadership in the country, signaling the frustration and anger among the public.

Many international organizations, including the IMF and World Bank, have recently downgraded China’s GDP growth forecasts for this year, citing zero-Covid as one of the major drags.

Xi, however, praised the government’s adherence to zero-Covid, saying it has “achieved significant positive results.”

Xi’s speech — a summary of the Communist Party’s work report, or action plan — was similarly short on concrete solutions to other challenges facing the economy in the near term.

“We believe the ongoing Party Congress may not be an inflection point for major policy changes,” Goldman Sachs analysts said on Sunday, adding that they believe China may not loosen its Covid restrictions until at least the second quarter of 2023.

On the property sector, Xi emphasized the need to provide affordable housing and dampen speculative demand — but there was no specific mention of the slump in real estate, which has mushroomed into a major crisis over the past few years, threatening both economic and social stability.

“We maintain our view that a comprehensive solution to the beleaguered property sector might not be introduced until after March 2023, when the political reshuffle is fully completed,” said Nomura analysts on Monday.

Nor did Xi mention record youth unemployment, which is mainly a result of his year-long crackdown on the tech industry set against the backdrop of punishing zero-Covid policies.

In the full version of the official 20th Party Congress work report, which was published shortly after his speech, Xi emphasized the need to continue the party’s “anti-monopoly” crackdown and regulate “excessive incomes,” a sign that he will continue to get tough on big businesses and wealthy individuals.

Beijing’s sweeping crackdown on the country’s private sector, under the banner of Xi’s “common prosperity” campaign, has pummeled several companies in sectors ranging from tech and finance to gaming and private education.

The government has defended the campaign as necessary for “social fairness” and narrowing income gaps.

In his speech, Xi also made clear that development was the “top priority” and stressed continued focus on “high-quality growth.”

That may dispel some market concerns that the government no longer cared much about economic growth, UBS analysts said.

However, to achieve Xi’s target of making China a “medium developed country” by 2035, the country’s annual real GDP growth needs to average around 4.7% a year from 2021 to 2035, the UBS analysts said. That could be “quite challenging,” they noted, adding they expect China’s potential growth to average between 4% to 4.5% a year this decade, and fall lower after 2030.

Meantime, a comparison between this year’s speech and the last one delivered by Xi in 2017 at the 19th party congress revealed a potentially worrying trend.

The frequency of words such as “security,” “people,” and “socialism” used in 2022 had increased compared to 2017, while that of “economy,” “market” and “reform” declined, Goldman analysts said.

The change was also noticed by Nomura analysts, who said it could point to “a shift in the party’s mandate.”