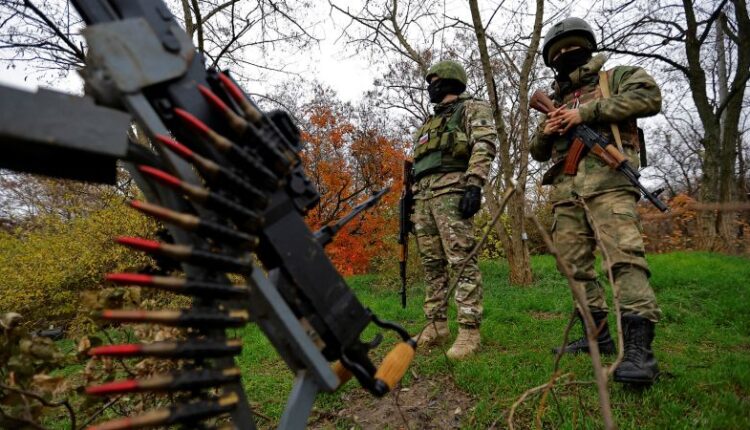 Some Russian troops are withdrawing from their positions in Ukraine’s southern region of Zaporizhzhia, according to Kyiv.

Russian units have left the settlements of Mykhailivka, Polohy and Inzhenerne, all towns south of the city of Zaporizhzhia, the General Staff of the Ukrainian military said in its daily update Thursday.

The military added that the Kremlin is also preparing the evacuation of “the personnel of the occupation administrations” in the region.

Zaporizhzhia has been partially occupied by Russian forces since the outset of the invasion; in September Moscow illegally declared it and three other Ukrainian regions region to be Russian territory.

Front lines in the region run for more than 100 miles across rolling farmland. Geolocated footage posted on Wednesday shows the aftermath of strikes on buildings in Polohy.

On the battlefield, the Ukrainians appear to be repeating actions they undertook further south in Kherson, namely striking bridges, supply hubs and Russian troop concentrations behind the front lines.

Ukrainian forces pushed into Kherson over recent months and liberated large swathes of the region, including Kherson city, after Russian troops withdrew east of the Dnipro River last month.

The General Staff said that in recent days their strikes on about half a dozen places had wounded more than 230 Russian soldiers and destroyed ammunition and equipment.

CNN is unable to confirm the claims made by the General Staff.

Powerful explosions have rocked the Russian-held Zaporizhzhia nuclear power plant in recent weeks, renewing concerns that fighting so close to the facility could cause a nuclear accident.

On November 20, UN nuclear experts at the plant said that more than a dozen blasts were heard within a short period of time. Shelling was observed both near and at the site of the facility.

The Director General of the UN’s International Atomic Energy Agency, Rafael Grossi, hopes to reach an agreement with Russia and Ukraine on protecting the plant by year’s end.

In an interview with the Italian newspaper La Repubblica published Friday, Grossi said: “My commitment is to reach a solution as soon as possible. I hope by the end of the year. I know that President Putin is following the process and I do not rule out another meeting with him soon, as well as with Ukrainian President Zelensky.”

The developments come as the Russian military has started a census in some parts of occupied territory in the Zaporizhzhia region, according to the Ukrainian mayor-in-exile of the southern Ukrainian city of Melitopol.

“Over the past few days, the Russians have been in a fuss. First, they were taking the wounded out of the hospital. Then they started a census in the towns of Mykhailivka and Burchak to allegedly prepare for evacuation,” Ivan Fedorov said on national television Friday. The Ukrainian military also said that the occupation authorities are conducting a census in Burchak.

Melitopol has been occupied by Russian forces since the early days of the invasion. Analysts have suggested that the next offensive front for the Ukrainians is likely to be a thrust southward toward it.

Russian units were also shelling several settlements in recently liberated parts of Kherson region. But Ukrainian Brigadier General Oleksii Hromov claimed that last week that Russian forces had accidentally fired on their own unit near the village of Tsukury in Kherson, killing 14 servicemen. CNN cannot verify that claim.

Hromov said that Russian forces had gathered in the city of Dzankhoi in Crimea, which had “actually turned into the largest military base on the territory … from where the Russian occupation troops and weapons and military equipment of the Russian Armed Forces are redeployed.”