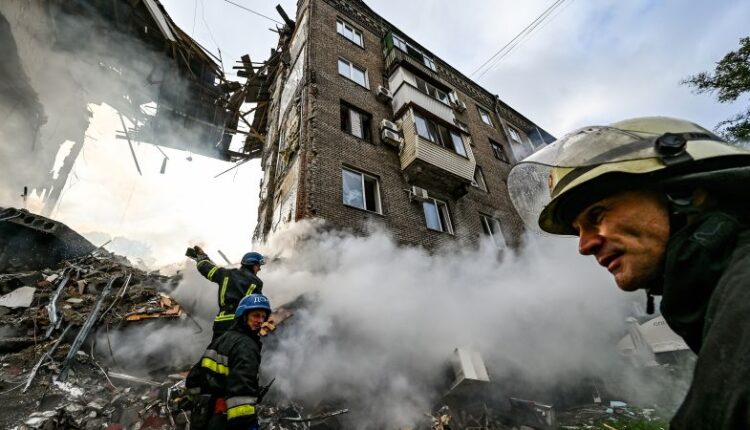 As deadly Russian airstrikes continued into a second day, Ukrainian President Volodymyr Zelensky on Tuesday asked the Group of 7 nations to help his country establish an “air shield” against aerial attacks.

Zelensky’s plea comes amid one of the fiercest bombing campaigns that Russia has waged against Ukraine since invading in late February. At least 19 people have been killed and more than 100 wounded across the country, as far away as the western city of Lviv, hundreds of miles from the war’s main theaters in eastern and southern Ukraine.

Russia has carried out over 30 missile strikes so far on Tuesday, compared to 84 on Monday. Roughly half of those on Tuesday were neutralized by air defenses, according to Ukraine’s military.

It is unclear how much longer the Russian military may be able to sustain such attacks. But Zelensky said his country needs more help with missile defense systems to combat Moscow’s blitz.

“When Ukraine receives a sufficient number of modern and effective air defense systems, the key element of Russian terror – missile strikes – will cease to work,” the Ukrainian President told leaders of the G7 nations Canada, France, Germany, Italy, Japan, the United Kingdom and the United States.

Zelensky also reiterated his demand for Russia to be declared a terrorist state and further sanctions. “We must block its energy sector with sanctions, break the stability of Russian revenues from oil and gas trade. A tough price cap is needed for the exports of oil and gas from Russia – zero profit for the terrorist state,” he said.

Russian President Vladimir Putin said Monday the intensified barrage of cruise missile and drone strikes are a response to what the Kremlin has called a terrorist attack on the Kerch Bridge, which connects the Russian mainland to the annexed Crimean Peninsula.

The bridge, an important artery for both civilian and military traffic, was damaged in a huge explosion early Saturday. What exactly caused the blast remains unclear; Ukraine has not acknowledged responsibility for the incident, and some officials in Kyiv, including Foreign Minister Dmytro Kuleba, allege that the Russian campaign this week was planned before the bridge blast.

According to Russia, Tuesday’s strikes targeted Ukrainian military sites and power stations – the latter of which Kuleba described as a war crime “aimed at creating unbearable conditions for civilians.”

Two “energy facilities” in Lviv were among those struck.

Russia’s military escalation this week has been met with widespread outrage, especially among Western democracies.

Following its virtual meeting Tuesday, the leaders of the G7 condemned Russia’s recent moves to annex Ukrainian territory and its recent “escalatory steps.”

Experts have cautioned that Putin’s recent maneuvers – including annexations of occupied territory, this week’s bombing campaign and allusions to nuclear weapons – are signs of weakness from the Kremlin.

The head of the UK’s largest spy agency, Jeremy Fleming, said there is “desperation at many levels inside Russian society and inside the Russian military machine,” while NATO Secretary-General Jens Stoltenberg said “Ukraine has the momentum” in the conflict.

“Russia is increasingly resorting to horrific and indiscriminate attacks on civilians and critical infrastructure. President Putin is failing in Ukraine,” Stoltenberg said at a news conference Tuesday.