A Russian naval base was targeted by drones. Now Ukrainian grain exports are at risk 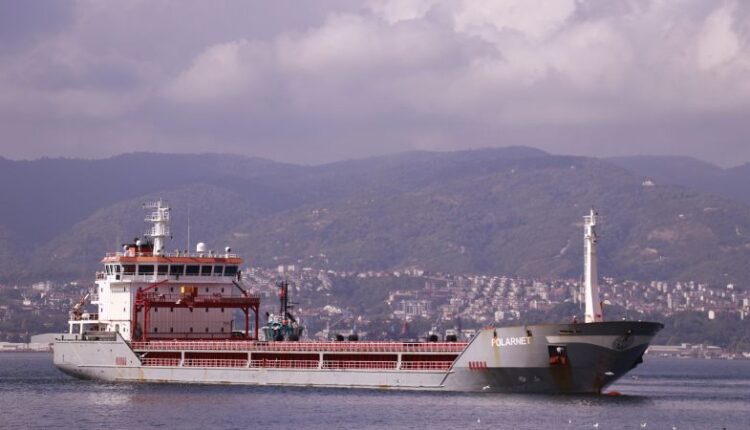 Russia has moved rapidly to cripple the United Nations-brokered Black Sea grain corridor in the wake of the drone attack early Saturday on the Crimean port of Sevastopol.

Ukraine has not confirmed that its forces attacked the port, and the extent of the damage to Russian naval vessels is not yet clear.

But it is very much in the Ukrainians’ interest to damage Russia’s Black Sea fleet and its home port. Ships and submarines routinely set out from Sevastopol with sea-launched cruise missiles to attack Ukraine’s infrastructure and especially its power grid. Those attacks resumed Monday, though at least some were air-launched.

Some reports from unofficial Ukrainian and Russian sources said the Admiral Makarov, a Russian frigate and one of several surface ships that carry Kalibr cruise missiles, had sustained significant damage Saturday, but there has been no independent confirmation of the claim.

The Washington-based Institute for the Study of War (ISW) noted that “social media footage documented an unknown number of unmanned surface vehicles striking at least one Grigorovich-class frigate.”

The Russian Defense Ministry said there had been only minor damage to a minesweeper. But the fact that the maritime drones reached the port at all angered some Russian military bloggers, who asked why netting at the entrance to the port had not been closed.

The ISW noted that a Ukrainian decision to target a “Kalibr-capable frigate at this time makes sense given the intensified Russian drone and missile strike campaign targeting Ukrainian energy infrastructure.”

Russia’s suspension of the Black Sea “grain corridor” – which allowed vital shipments of grain and oilseeds to pass safely through the Black Sea to reach global markets – was predictable and inevitable after a growing drumbeat from Moscow that July’s agreement had not produced the promised benefits for Russian exports of grain and fertilizer.

But, in an effort to shift blame, the Defense Ministry in Moscow explicitly linked the suspension to the Sevastopol attack, claiming that the drones that attacked the Black Sea Fleet were launched from Odesa and had moved through the corridor. The Foreign Ministry in Moscow added that these actions “were directed… against Russian ships that ensured the functioning of the said humanitarian corridor.”

On Sunday, the Defense Ministry claimed – without providing supporting evidence – that the memory of a navigation receiver that had been recovered showed that “the launch of marine unmanned vehicles was carried out from the coast near the city of Odesa.”

Little is known about Ukraine’s maritime drones. A purported image of one circulated on social media in August, showing what looked like a small speedboat washed up on the Crimean shore. That image was never confirmed as genuine. But this weekend, one Russian military commentator alleged on Telegram that it bore all the hallmarks of an American-made marine drone.

Alexey Rogozin, of the Center for Transportation Technology, said that a “large internal space in the device found near Sevastopol makes it possible to place a large warhead, activated by a contact fuse.”

Russia’s Defense Ministry also alleged that one of the drones could have been launched from a civilian ship carrying agricultural products from the three ports of Ukraine that were part of the agreement.

It said specialists had conducted an examination of a Canadian-made navigation module installed on one recovered drone, yet again tying NATO directly to Ukraine’s war effort.

Altogether, according to Russia’s Defense Ministry, the attack involved “nine unmanned aerial vehicles and seven autonomous sea drones.” It also accused the United Kingdom of training the Ukrainian military on the sea drones, a claim swiftly rejected by the UK’s Defense Ministry, which tweeted that “to detract from their disastrous handling of the illegal invasion of Ukraine, the Russian Ministry of Defense is resorting to peddling false claims of an epic scale.”

(For good measure, Moscow also claimed that Britain’s navy had been responsible for the sabotage of the Nord Stream gas pipelines in the Baltic last month.)

Ukraine has dismissed the Russians’ linkage of the attack with the grain corridor. The Secretary of the National Security Council, Oleksii Danilov, described the Russian narrative as “paranoid and delusional.”

Ukraine’s Foreign Minister Dmytro Kuleba said Sunday that Russia had suspended its participation in the grain deal “on a false pretext of explosions 220 kilometers away from the grain corridor,” and said Russia had planned its withdrawal from the accord “well in advance.”

“Russia took the decision to resume its hunger games long ago and now tries to justify it,” Kuleba tweeted.

In September, according to documents seen by CNN, Russian officials involved in the clearing of ships in Istanbul, Turkey, began delaying inspections, causing a large backlog in traffic.

The grain corridor has allowed ships to carry some nine million tonnes of grain from Ukrainian ports to foreign markets over the past three months, according to Ukraine’s Infrastructure Ministry.

Now Russia has suspended its participation in the deal, it will be much more difficult for Ukraine to export its grain and oilseeds – if the other three parties to the accord (Ukraine, Turkey and the United Nations) give in to Russian threats.

Late Sunday, in a somewhat surprising decision, the Joint Coordinating Center (JCC) in Istanbul announced that it had approved the passage of 16 ships Monday to and from Ukrainian ports. It added: “The UN delegation, in its capacity as JCC Secretariat, has informed the delegation of the Russian Federation on the movement.”

That was despite the Russian Foreign Ministry saying Sunday that it was “suspending [the agreement’s] implementation as of today for an indefinite period.”

UN Secretary General Antonio Guterres postponed travel plans to focus on saving the arrangement, in which he invested substantial effort in the first half of this year.

It’s unclear whether and for how long the Black Sea corridors will continue to operate without Russian assent. The willingness of merchant shipping to carry grain through contested waters without the safeguard of the deal (and of insurers to provide the insurance required) is yet to be tested.

Kremlin spokesman Dmitry Peskov warned Monday, in a regular call with reporters, that without Russia’s participation, the Black Sea grain deal would become “much more risky, dangerous and unguaranteed.”

Without Russia guaranteeing navigation safety in these areas, “such a deal is hardly feasible,” he added.

Any prolonged interruption may lead to supply shortages and higher prices for grain. Amid drought in parts of east Africa, the International Rescue Committee said “the renewed blockade will continue to impede the import of 80% of grain imported from the Russia-Ukraine region, thereby driving further hunger.”

But it’s crystal clear that Ukraine will continue efforts to counter Russian missile attacks on its infrastructure. It won’t risk attacking airbases inside Russia and in Belarus, but it won’t hesitate to continue striking Russia’s Black Sea fleet.