A three-week drive around Ukraine’s front lines taught me this: The tide of the war is unlikely to turn any time soon 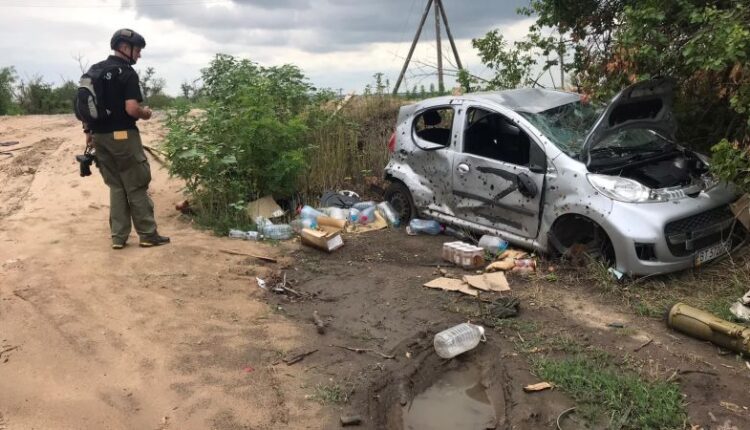 There are many observations to be made about Ukraine. But on a recent road trip, one sticks out – just how vast the country is.

Three weeks of driving from south to east in this sprawling country through front line villages, towns, past trenches and along hedgerows which are this wars strategic equivalent of high ground, is an education, and one that Russian President Vladimir Putin could use.

Almost six months on, the disastrous war that he launched is stagnating. Scenes reminiscent of World War I trench warfare and its associated incremental gains and death are taking hold.

The almost 1,000-mile-long battle front Putin opened has hardened, but the country behind is deep, and for the most part unscathed.

Thirty miles from the front, city lawns are still being mowed, while many hundreds of miles away in the capital Kyiv, fancy restaurants have reopened, where fine wines and chilled champagnes are available, and fresh caught Mediterranean fish is on the menu.

This is a fat land, with fertile farms and proud crops rich from rain and sun. If strategic depth is what’s behind the front lines, Ukraine has an untapped wealth available.

Perhaps most striking is the number of military age males across the country who are not yet committed to the fight. Ukraine is at war, but not yet it seems, all in. Only some of Ukraine’s potential fighting force are in bunkers buried in tree lines overlooking Russian forces.

Cobblers, authors, artists, teachers, businessmen, journalists, even a former McDonalds franchise CEO, are holding back Putin’s push, but when the government needs it there are many more who can be called on.

The big takeaway is, that this is not a war that’s going to be over fast, not is even clear yet if the real defining fight has begun.

No front line position can really be measured day-by-day, but over weeks of travel and many many conversations, a reality emerges.

The war is settling into a slower phase where the contours of what’s contested are becoming clear, but the detail on any given day shifts. Tree lines that border the huge fields here are favored by both sides to stay hidden from drones and the strikes that follow once spotted, but the massive fields often dictate front lines a mile apart. The result less likelihood of positions shifting.

Troops on some fronts in the east told CNN they’d seen as many as half of Russia’s troops pulled out of the fight, yet just a handful of miles away amid a cacophony of artillery, grad rockets, anti-aircraft gunfire, heavy machine guns and small arms, Russia seems all in. And along lines in the south, Ukrainian troops told us they’d seen Russians bulking up, pushing more forces in.

Ukrainian officials say they’re expecting a Russian advance and have built up a counter-narrative they’ll retake Kherson, one of the first cities to fall in early March, as Russia ramps up strikes on Mykolaiv. Logically Kherson is the obvious first big grab, most Russian forces are on the other side of the Dniper river making it a vulnerable bridgehead valued by both sides.

But the reality on the ground is that we saw no buildup of Ukrainian forces. In fact, quite the opposite: huge expanses near the front were devoid of soldiers. They weren’t hiding in the trees either; roads seemed virtually untouched by heavy-tracked fighting vehicles or tanks, with no tell-tale mud on the road or any sign troops were moving in numbers.

Russia lied its way in to this war, lied to the world it wouldn’t invade, and lied to itself an easy victory awaited. It may now also be victim of a carefully curated lie, or information operation sowing false information about Ukrainian intentions. Hype about a Ukraine’s southern offensive maybe nothing more than that, a trick causing Russia to redeploy forces from the east to the south.

What hasn’t changed, despite the influx of Western weapon systems like the US HIMARS, and M777, British MLRS and Polish KRABS, Russia still outmans and outguns Ukraine by about five to one.

Ukrainian President Volodomyr Zelensky says there won’t be peace until Russia leaves all occupied territory including Crimea, which they annexed in 2014. He’ll need an army to do it, but not the hodge-podge of regulars and volunteers that he has at his disposal today.

Today cellphones often substitute for secure radios, flip flops for combat boots, friendships for formal command structures. One volunteer drone commander said he calls his artillery buddy on an unencrypted mobile phone, not a secure radio or data channel, when he spots a good target. In a more joined-up military structure the artillery commander would see the drone feed live.

Ukraine’s army won’t give up an inch without a fight, but while its volunteer army has impressed the world and surprised the invading forces with their determination and resilience, reclaiming lost territory would cost less blood with a more integrated and professional force.

Time and again along the front line troops told us when they lay down fire on Russian forces the enemy’s guns go silent. Western help is buying respite but not a lasting reprieve from the threat.

Soldiers’ pale faces and distant stares told us just how much time they spend sheltering in spade-dug, damp, claustrophobic holes wondering if the next incoming rocket will be their last.

Unless you’ve experienced this bombardment, it’s easy to understate how harrowing the constant danger is – for both soldiers and civilians. It eats into sleep, stretches time, collapses concentration. Senses shut down, many impervious to the detonations, only diving for cover when an explosion is particularly close.

That’s the life we found in many towns and villages in the wide ribbons of contested territory, the closer to the front the greater the danger.

Like scenes from WW1, citizens scavenge wood from bombed wreckage of neighbors’ houses, they cook outside because they have no gas, electricity or water. Imagine a winter like this? Soon, we won’t have to, the cold months are coming, hardships and deprivations will multiply.

Local hospitals are clearing wards ready to treat more victims. Russia is increasingly targeting civilians with illegal cluster bombs, significantly driving up the number of causalities and spreading terror. One victim told us he was sitting outside his home with friends when a cluster bomb struck, injuring three of them and breaking his leg, damaging his arm and peppering his body with tiny metal fragments.

An ugly world war throwback is wrapping a wreath around a ribbon of Ukraine. Putin’s hell has a lot more ugly tomorrows to come, and while the tide of Putin’s offensive has yet to turn conclusively for Ukraine, it is weakening in their favor.