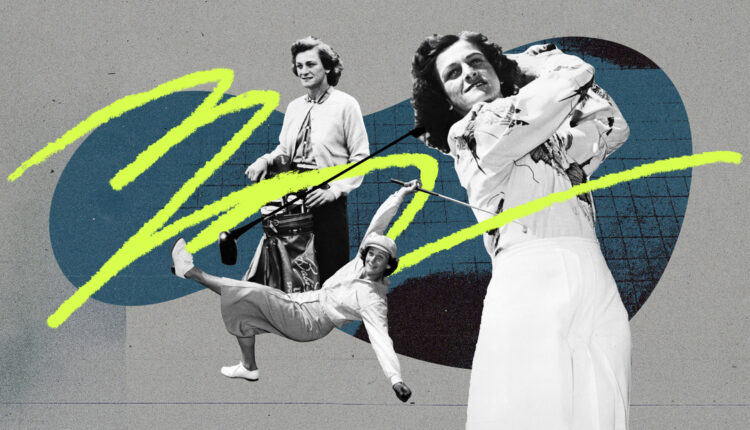 As well as being one of the 13 founding members of the Ladies Professional Golf Association (LPGA) in 1950, she went on to win 14 consecutive tournaments at the peak of her career.

However, because of Zaharias’ love of entertaining the gallery on the golf course with lewd jokes and colorful language, coupled with her refusal to conform to the traditional stereotypes of femininity of the time, she was a pariah amongst her fellow competitors and the subject of sexism and prejudice from the media.

“If somebody was looking at Babe and they were sexist or they didn’t think that women belonged on a golf course or in a track and field event, she heard a lot of that,” Don Van Natta Jr. — author of “Wonder Girl: The Magnificent Sporting Life of Babe Didrikson Zaharias” — told CNN Sport.

“She was criticized for her look; she was criticized for not being ladylike enough. There were comments made in the press, that she should be home sitting by the phone, waiting for a suitor to call her as opposed to being out competing. It was very harsh, negative, critical things. And they hurt her deeply.”

READ: Why record-breaking drives could change golf as we know it

The daughter of immigrants from Norway, sport always played a big part in Zaharias’ life.

From baseball and basketball to track and field and tennis, Zaharias seemingly excelled at whichever sport she turned her hand to. She earned her nickname “Babe” as a result of her baseball ability and comparisons between her and Babe Ruth.

While she tried golf early on, a career in athletics was Zaharias’ primary focus at a young age. Such was her dedication and cross-discipline ability at track and field, stories of Zaharias single-handedly beating entire teams became common across Texas.

The pinnacle of her athletic career coincided with the 1932 Olympic Games in Los Angeles, a time when athletes, unlike today, didn’t always specialize in one sport, but often entered multiple disciplines in the hopes of achieving success.

Women, however, were unable to enter more than three events, so Zaharias participated in the javelin, high jump and 80m hurdles.

To this day, she is still the only track and field athlete, male or female, to win individual Olympic medals in running, throwing and jumping events. Zaharias won gold medals in both the hurdles and the javelin, and a silver medal for the high jump, but only after she was adjudged to have used an improper technique in a jump-off after tying with fellow American Jean Shiley.

Van Natta Jr. believes that Zaharias could have won more medals had she been allowed to compete in a greater number of events.

“I don’t know about gold medals, but I think she could have medaled in probably at least five [sports],” he said.

“She came in first place, just among obviously her American counterparts, at the event at Northwestern [University] that was the qualifying event for the Olympics, and she won five of those events. So I believe she could have been medaled in five (javelin, hurdles, high jump, 100m sprint and discus) easily if she had been allowed to.”

READ: The golfer who drove over 4,000 miles across the US to play in tournaments

In the 1930s, it was difficult for women to earn any sort of living in athletics due to an almost total lack of prize money and sponsorship opportunities.

“Babe was very much thinking about a way to make a living as a sports woman,” Van Natta Jr. said. “And so she figured out that golf was one of the places that you could actually do it, even though a lot of the events were amateur events. But if you succeeded at them, she figured she could market herself and find some income that way.”

Zaharias took up golf with a “competitiveness that was beyond fierce,” Susan Cayleff — who authored two books about Zaharias’ life — explained.

“She would drive golf balls until her palms bled and didn’t set any kind of realistic limit on herself in terms of physical expectations,” she said.

However, her previous success in other sports led the United States Golf Association (USGA) to bar Zaharias from playing in amateur women’s tournaments, compelling her instead to play in professional men’s PGA Tour events.

“They barred her in part because of a snob aspect,” said Van Natta Jr. “She was seen from the wrong side of the tracks, she was seen as a poor woman, she was coarse in the way she carried herself. She started defeating these wealthier women, well connected women to the USGA, so they knocked her out for a while.”

READ: How Brendon Todd came in from the cold to grab himself a slice of the action

Whilst playing one of these PGA Tour events, Zaharias was paired with George Zaharias, a famous wrestler from the time. The two married in 1938, with George becoming her promoter and manager.

With her husband’s help, she became a “huge draw for the crowds,” Van Natta Jr. notes, with her “chattering” nature making her one of the sport’s biggest draws.

She was said to have shown up at professional tournaments and announced to the media: “The Babe is here! Who is going to finish second?” as well as standing on the first tee before teeing off and announcing that she was going to “loosen my girdle and let it fly.”

However, her lack of femininity — “telling bawdy jokes and swearing, sometimes spitting, drinking,” according to Cayleff — and the perceived “working class, gritty, sweaty” nature of track and field competition put Zaharias at odds with her more traditional female competitors.

And because she stood out from the rest of the field and wasn’t the most gracious of victors — “She would rub the people who she defeated, their noses in their defeat,” Van Natta Jr. explained — Zaharias consistently found herself on the receiving end of negative coverage from a predominantly male media.

Cayleff describes Zaharias as being a “gender trickster” as she behaved “in ways that were absolutely contradictory to ideal femininity.”

But as a result, she was vilified in the press, with even her sexuality coming into question at times.

“They took her uniqueness and what I refer to as her gender outlaw status,” Cayleff said. “They take her behaviors and, particularly before she’s married, absolutely craft her as a freak with newspaper headlines like: ‘Mr., Miss or It?’ or ‘Which bathroom should Babe Didrikson use?’

“They feared or presumed she was lesbian and then a particular term was coined in reference to her. She was called a ‘muscle moll’ or a member of a third sex. People were baffled and troubled by her gender presentation and particularly women golfers who tended to be of a more upper-class background and fancied themselves refined; they demonized her.”

READ: Golf’s new star is living proof you should never give up on your dreams

To counter the negative coverage, Zaharias recruited the help of Bertha Bowen, a Dallas socialite, who taught her how to “apply makeup, how to wear a girdle and get her hair styled,” Cayleff explains.

“She was the subject of absolutely vicious press after the 1932 Olympics where people were openly speculating and disparaging her sexuality and the like. And she understood, with the guidance of Bertha, that if she wanted to earn a living and keep her name in the public that she needed to seriously craft an image because who she legitimately was, was not someone that the American public was easy to embrace.”

Even so, Zaharias’ competitive nature meant that she found it difficult to fully integrate into typical golfing society. This didn’t stop her from becoming one of the most successful women golfers of the time, winning 41 professional tournaments in total.
And as one of the LPGA’s 13 original members, she “planned and organized the golf tournaments, drafted the by-laws, supervised membership, (and) set up the courses” to help establish the professional women’s game, the LGPA website explains.

Although she did a lot for the sport for women, Cayleff contends that Zaharias was not a “self-conscious role model or promoter of opportunity for women in sports.”

Cayleff recalls an incident she found while doing research for her book when Zaharias threatened to withdraw from a tournament going into the final round, despite leading by several shots, because, in her eyes, the prize money was not enough.

“It’s a sort of mixed legacy. Yes, she absolutely impacted opportunities for athletes that came after her and athletes during her own lifetime, but she was in no way what we would call a feminist or gender conscious or concerned about equity in general,” Cayleff said. “She was concerned about a good payday for her and let the chips fall where they may be on that.”

In 1953, Zaharias was diagnosed with colon cancer and, at the time, doctors were not even sure they could cure her. However, in 1954, she not only returned to playing the sport, but won the US Women’s Open in Massachusetts, her 10th and final major, by a dozen strokes, while having a colostomy bag strapped to her side.

Zaharias chose to go public with her fight against cancer. This decision — plus her remarkable comeback and her extensive work with the American Cancer Society — helped change her perception in the eyes of both the public and the media, with Cayleff saying that it “heroized her in some ways to a new generation.”

“She was honored by President Eisenhower for her work with the American Cancer Society and did considerable fundraising for cancer research,” Cayleff said. “The cancer work and the ability to come back and compete successfully was pretty much unheard of at that point. She was told she would never be able to compete again. And like she had done so many times in her life, she just tripled her efforts and determined she would prove them wrong.”

Visit CNN.com/sport for more news, features, and videos
Her cancer eventually returned, and she underwent further surgery in 1956, ultimately dying from the disease in September of that year at 45 years old.