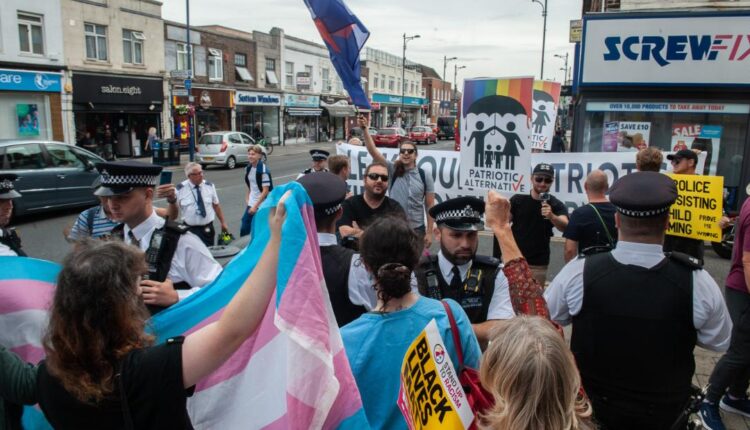 In footage shared online, anti-vaxxer Michael Chaves ​is seen berating parents — some of whom are carrying infants — arriving for Drag Queen Story Hour UK, an event at which books promoting compassion and inclusion are read to children. Chaves goes on to falsely accuse Sab Samuel, who was performing that day as drag queen Aida H Dee, of being a pedophile. CNN has reached out to Chaves for comment; he has not responded. ​

As protesters unfurled a banner reading: “Welcome groomers” outside the library, two women who had pretended to be attendees disrupted the reading inside the building, calling Samuel an “adult entertainer” as they terrified parents and children in the process, according to Samuel. At least one mother was seen crying after the incident, Samuel said.

The term “groomer” is a homophobic stereotype used to falsely smear queer people and their supporters as child sex abusers.

At the end of the session, Samuel left the library with police protection as demonstrators hurled abuse.

​Recent angry confrontations around events involving drag queens in the United Kingdom follow a disturbing precedent from the United States, where right-wing extremist groups ambush similar events and conservative politicians have pledged to criminalize adults taking children to drag shows.
It has coincided with a wider movement to curtail rights ​related to bodily autonomy, ranging from abortion access to gender affirming care​, punctuated by a wave of anti-LGBTQ bills and Justice Clarence Thomas questioning marriage equality as the US Supreme Court overturned the ​federal right to abortion ​in the United States.

“This is the same hate (as seen in the US) but just in a different context … the same disgust, the same homophobia and transphobia,” Samuel, who founded Drag Queen Story Hour UK, told CNN.

Extremist groups in Britain are now feeling emboldened amid “a broader pushback against (queer) identities existing in public,” according to Tim Squirrell, an online extremism expert and communications director at the Institute for Strategic Dialogue (ISD) think tank.

“Even people who are reasonably progressive in their beliefs and politics have become quite radical ​[in their opposition to] this thing, which really, really worries me, not least to the actual risk of queer people existing in public, but in the US, we’ve seen it tied into a much broader attempt to rollback LGBT rights,” he told CNN.

The pushback against LGBTQ rights in the UK has largely affected trans people, say campaigners, where ​so-called gender critical activists and ​sympathetic British press have succeeded in curtailing efforts to make it easier for trans people to change their gender marker.

Britain’s Conservative leadership contest has seen hopefuls ​espousing anti-trans rhetoric, and promising policies that would impede on the rights of trans people.​

Trans people may potentially be left out of plans for a ban on conversion therapy ​in the UK, while some religious and ​other anti-trans groups campaign against the teaching of ​what they call “gender ​ideology,” or information about the existence of transgender and nonbinary identities, in school.

Drag queens have also been ​a target of some feminists, who criticize them for what they perceive as a mocking portrayal of women and for being over-sexualized.

Drag culture has long centered around LGBTQ people, challenging traditional expectations and beliefs ​about the ways people of all genders and sexual orientations express themselves.

Samuel said this was what had inspired him to quit his job in marketing and start Drag Queen Story Hour UK three years ago. He said he wanted to provide kids with diverse role models, which he did not have growing up. But ​he says the death threats soon followed, and Samuel said that in 2020 he and his boyfriend moved homes because anti-LGBTQ trolls “found out where I lived.”

He said last week’s incident has pushed him to the brink.

Speaking to CNN, Samuel vociferously denied accusations that children attending his shows are exposed to sexual language. What he does is a public good, he said.

​Samuel, who is autistic and has ADHD, gave an example from the event in Reading of why he sees the story hours as so important. “Some autistic children and their parents had come specifically to see me because they knew I was autistic,” he said. When some of the young attendees realized that his drag queen persona, Aida H Dee, was a play on ADHD, a condition they also had, their faces lit up, he said.

“I could see the sparks in the synapses of their brain firing with joy… (they were thinking) that this person was amazing and like me,” he continued.

Yet as anti-drag queen protests ramp up, analysts are increasingly concerned about the hateful extremist discourse surrounding them.

The term sovereign citizens emerged from the US, according to Hope Not Hate. It is based on a belief that government institutions are fraudulent, so followers do not have to abide by them. The FBI has noted that sovereign citizens operate in loosely affiliated networks without established leadership.

Alpha Men Assemble is described by anti-extremist advocacy group Hope Not Hate as “attempting to establish a hardcore of activists and has attracted the involvement of a number of far-right individuals.”

The group received a lot of media attention in recent months over fears it was evolving into a US-style private militia by its alleged recruitment of former veterans and military training sessions. CNN has been unable to reach the group for comment as it has gone to ground following media and governmental scrutiny.
Ondrak is concerned that conspiracy groups, which gained large followings during the pandemic, are now pivoting towards LGBTQ targets using “groomer” narratives.

“I genuinely thought what would be happening next (is) some kind of opposition towards the green energy transition, but that kind of fell out of the public discourse — so unfortunately, the queer community has become their target,” he said.

CNN has seen at least four anti-vax Telegram channels, including one boasting more than 17,000 followers, sharing flyers and posts to protest against Drag Queen Story Hour.

When asked why groups that appear to facilitate hate speech are allowed to operate on their platform, a Telegram spokesperson said: “Telegram is a platform for free speech where people are welcome to peacefully express their opinions, including those we do not agree with.” The spokesperson added that “posts that glorify or encourage violence or its perpetrators are explicitly forbidden by Telegram’s terms of service and are removed by our moderators.”

As to the White nationalist groups attending the protests, such as Patriotic Alternative, Squirrell from ISD described them as “deeply homophobic.” ​

They believe that “White people are being systematically replaced by non-White people in Western countries,” he said. They say a “shadowy cabal of Jews” are encouraging White people to adopt queer identities as a way of reducing the White birth rate — views rooted in neo-Nazi ideology — Squirrell added.

In response to CNN’s request for comment, a spokeswoman for Patriotic Alternative said: “Drag queens are often highly sexualized caricatures of women and we believe that children should be allowed to enjoy their childhood and should not be subjected to LGBT indoctrination.”

Two days after the events in Reading, in the northern English town of Crewe, members of Patriotic Alternative picketed a library which was hosting a Drag Queen Story Hour UK event. The group’s leader ​later promised more demonstrations against Samuel’s summer tour of dozens of libraries across the country.

The protests continued last Thursday, when ​Samuel visited libraries in Bristol, a city in southwestern England known for its liberal attitudes.

Rosie, a local parent who asked CNN not to use her last name ​out of fear for her safety, told CNN she decided to take her young daughter to the event because she thought it was important to learn about inclusivity and different communities.

“I love drag queens, I think it is fun, it is art, it is a laugh, and something different that involves books and stories,” she said.

But Rosie said she was unprepared for the vitriol she encountered at the library, where protesters waved signs reading “Stop grooming children” and a line of police officers ushered parents into the building. At least one mother was crying inside as protesters played the theme song to British TV show “Jim’ll Fix It,” whose late host was a notorious ​child sexual abuser, on loudspeakers outside the library.

“It was just horrible. I was expecting it to be a joyous thing, considering it had been Pride a couple of weeks ago in Bristol.” Instead, she said the harassment by protesters was “very backwards and (I feel) naive to think there’s been any progress.”​​

Nancy Pelosi lands in Taiwan amid threats of Chinese retaliation