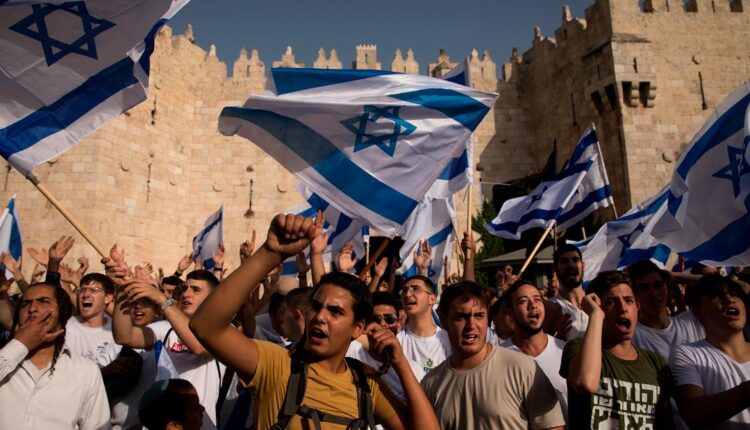 Israeli police estimated that more than 70,000 people took to the streets of the flashpoint city for a Jerusalem Day flag march, which has become a magnet for far-right Jewish extremists. CNN journalists on the ground witnessed some of those marching hurled insults, punches and objects at Palestinians, journalists and police.
At one point, groups were chanting “death to Arabs,” and “Arabs are sons of b*tches.” One marcher was filmed chanting “Shireen is dead, Palestine is dead,” in reference to Shireen Abu Akleh, the Al Jazeera reporter who was killed while covering an Israeli military raid in the West Bank earlier this month.

Several Israeli politicians condemned the actions of the participants, while commentators noted that the march has become overrun by right-wing extremists and Jewish settlers — and is largely avoided by secular Israelis and ultra-Orthodox Jews.

Israeli Prime Minister Naftali Bennett condemned in a statement what he said was “a minority that has come to set the area ablaze,” while Foreign Minister Yair Lapid said the extremist groups La Familia and Lehava, whose flags were raised during the procession, “do not deserve to carry the Israeli flag.”
Security Minister Omer Bar-Lev defended approving the route of the march through the Muslim quarter of the Old City, writing on Twitter: “If we succumb to the threats of terrorism not to wave Israeli flags in our capital, we will not know one day of silence, and we will find ourselves folding in the future as well.” But he also condemned what he said was “ugly racist behavior that cannot be tolerated.”

Israel considers both eastern and western sectors of Jerusalem as its “undivided capital.” Most of the international community considers the eastern sector as being occupied. East Jerusalem has a sizable population of Palestinians, who want that part of the city to be the capital of a future state.

Issawi Frej, Minister of Regional Cooperation and the second ever Muslim minister in an Israeli government, said on Facebook that he boycotted government meetings on Sunday “in light of what is happening in Jerusalem and in the entirety of the decision-making process regarding today, where I tried to change the course of the Flag March and work to calm the situation in vain.”
Michal Rozin, a member of the Knesset, the Israeli parliament, tweeted a video of a young Jewish man waving an Israeli flag like a weapon toward a group of young Palestinians.

“If anyone has not yet understood why the flag parade has become a show of bullying and violence, this video from Nablus Gate might be able to sharpen it,” she wrote, referring to one of the gates of the Old City. “My flag is not a weapon.”

Yaakov Katz, editor-in-chief of the English newspaper Jerusalem Post, wrote in a column that “there is a sad conclusion we cannot ignore: Israel has a racism problem, and it rears its ugly head on Jerusalem Day.”

Yedioth Ahronoth Columnist Nahum Barnea wrote that the day has been taken over by settlers and religious Zionists who turn it into a day that is “Not love for Jerusalem; but hatred for Arabs.”

Zaid Saeed Ghuneim was shot and killed by Israeli forces in the West Bank town of Bethlehem late Friday, according to the Palestinian Ministry of Health. The ministry said he was rushed to hospital with bullet wounds in his neck and back, but doctors were unable to save him. The Israeli military told CNN that several soldiers in the Al-Khader area of Bethlehem were conducting a “routine security activity” in the area when “suspects hurled rocks and Molotov cocktails at the soldiers, endangering their lives”. In pursuing the assailants, the soldiers responded with live fire, injuring one of the suspects, according to the military.

An Egyptian court sentenced former presidential candidate Abdel Moneim Aboul Fotouh and several prominent figures from the banned Muslim Brotherhood to lengthy jail terms on Sunday on accusations including plotting to overthrow the state. Aboul Fotouh was sentenced to 15 years in prison, subject to appeal, the court ruling said.

Turkish President Recep Tayyip Erdogan said talks with Finland and Sweden about their joining NATO were not at the “expected level” and Ankara cannot say yes to “terrorism-supporting” countries, state broadcaster TRT Haber reported on Sunday.

Saudia Arabia designated 2022 as the ‘Year of Saudi coffee,’ but some Saudi Twitter users are now calling for the boycott of coffee shops. What went wrong?

The social aspect of coffee drinking in Saudi Arabia is held dearly, with decorum dictating how coffee should be drunk and which hand it should be poured with. Coffee is a sensitive topic in the country and any threat to the culture surrounding it is taken seriously.

Saudis on social media say they’ve had it with what see as exaggerated prices for the drink as the culture moves from traditional Arabic coffee to Western-style cafes where a cup costs as much as 30 riyals ($8). Many users said expensive cups were “mostly ice” and tasted like instant coffee.

The rise of such shops introduced drinks like the “Spanish latte” (as a cafe con leche is known), the macchiato, and others. Twitter users pointed out that cheaper coffee options do exist, but people seek out “over the top” drinks.

The government, in an effort to capitalize on the global coffee craze, plans to localize production. This month, the kingdom’s sovereign wealth fund established the $320 million Saudi Coffee Company, aiming to play a role in “developing sustainable coffee production in the southern Jazan region, home to the world-famous Coffea Arabica.”

Asymmetrical Multiplayers To Play On Your Day Off