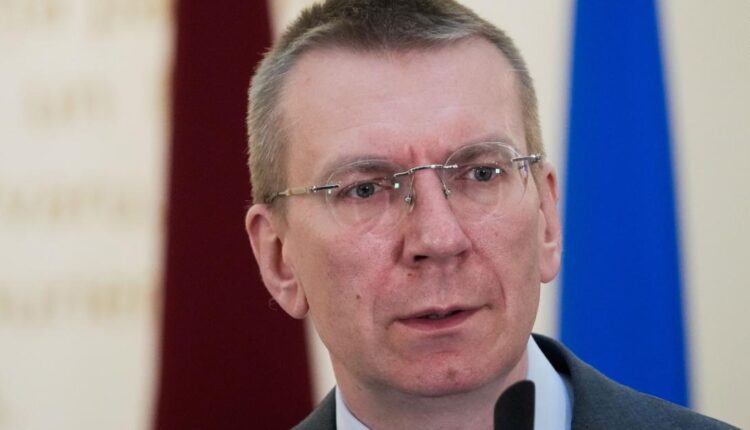 In an exclusive interview with CNN in Washington, DC, Rinkēvičs also outlined Latvia’s key goals for NATO’s approach to the eastern flank — namely, a long-term military presence — and expressed concern about the mounting food crisis caused by Russia’s blockade of Ukrainian ports.

Rinkēvičs’ visit to DC came as US Defense Secretary Lloyd Austin said that “Ukraine is facing pivotal moment on the battlefield” and the Biden administration unveiled a new tranche of military assistance to Ukraine — a move to bolster Kyiv as the war nears the end of its fourth month. The Latvian foreign minister will meet with lawmakers and Biden administration officials while in the nation’s capital ahead of the NATO Summit in Madrid later this month.

Although Rinkēvičs did not name names in his critique of European leaders who he says maintain a “fear” of vexing Putin, he told CNN he was referencing “those who are well-known from time to time openly saying that they don’t want to see him humiliated or that we need to provide some off-ramp” — a seeming swipe at French President Emmanuel Macron, who in early June said “we must not humiliate Russia so that the day when the fighting stops we can build an exit ramp through diplomatic means.”

Rinkēvičs said such an approach is “not rational,” telling CNN that the “mentality in many of the capitals needs to be changed.” He also noted that diplomatic outreach by world leaders to Putin in an attempt to get him to end the war had not yielded results, and said he believed the Russians “can be stopped only by Ukrainians, only by them fighting.”

The foreign minister said the war in Ukraine was bigger than the Russian leader, noting that they wouldn’t be able to commit the war “without the support of the population … without this kind of brainwashing of the people via propaganda channels.”

He praised the United States for its military support for Ukraine, and said that European allies ought to scale up their wartime industrial production, noting that “we had those nice 20-plus years of downsizing militaries, getting rid of all this stuff, and then now suddenly, we need for our own defense, we need to arm Ukraine.”

Moreover, Rinkēvičs told CNN that “nobody should push Ukraine to provide concessions to Russia” — concessions like ceding territory to Moscow in order to stop the war. Although this might work for some time, the foreign minister cast doubt that it would be a permanent deterrent to future Russian aggression.

“Let’s not make this mistake again. Russia is not making this war about NATO expansion or keeping Ukraine out of NATO or EU. It’s about destroying Ukraine, getting land, restoring empire,” he said.

In order to prevent future military aggression by Moscow, Rinkēvičs said that “Russia needs to be in a situation where its war and economic machine is in such a state that it cannot launch any military offensive operation,” and although he does not see sanctions ending the current war, they could help deter a future one.

Send a ‘clear message to Russia’

As NATO leaders prepare to meet in the Spanish capital later this month, Rinkēvičs said Latvia, which borders both Russia and Belarus, sees very specific measures that should be carried out to enhance security in the Baltics, the foremost of which is a long-term NATO troop presence.

The foreign minister told CNN it was crucial to send “a clear message to Russia” that it is NATO territory, and “not an inch” will be ceded, acknowledging that Madrid would only be the start of the discussion and decision process.

“What we want to avoid is the situation where parts of the Baltics that’s all of a sudden occupied and then they are liberated by NATO troops and then we get new Buchas or Mariupols,” Rinkēvičs said, referencing the names of areas of Ukraine were mass atrocities have been committed.

“So what we are talking (about) internally, this is a change of the kind of deterrence and defense sort of (through) punishment to defense and deterrence through denial, denial to get into the Baltics,” he said.