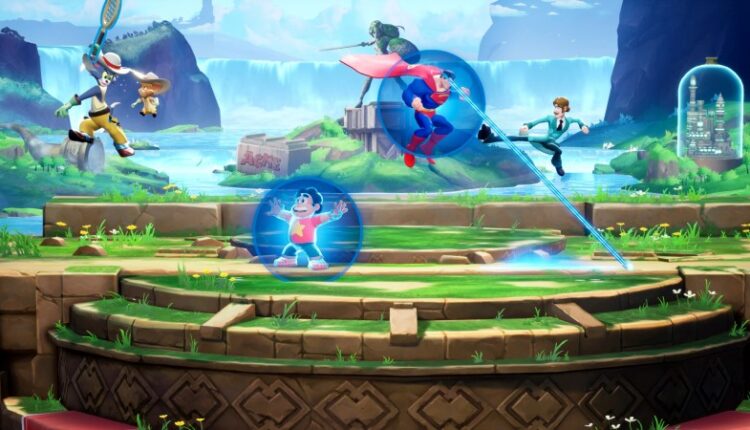 
Warner Bros. has given new studio Player First Games some of its most popular characters to carve out space in the Smash Bros.-dominated IP-crossover-fighter genre. MultiVersus succeeds where others have failed, but it still has some growing to do.

Though LeBron James appears on the roster thanks to his starring role in Space Jam: A New Legacy, the WB roster in MultiVersus doesn’t feel as icky as the roster of that film. Each character is treated with reverence, creating a world where you eventually don’t bat an eye at the fact that Arya Stark from Game of Thrones is stabbing Bugs Bunny.

The tight, Smash-like controls deftly convey the powerful and heavy Iron Giant just as well as the swift and silly Finn from Adventure Time. Just when I thought I had found my main, I started up another character and was always surprised by how unique and interesting they were to learn.

While 1v1 and 4-player Free-For-All are included, everything is built around 2v2 gameplay. Character classes indicate traits at a glance and hint at how teams might gel. For example, Velma can hang back and cover with projectiles and buffs/debuffs, while Superman charges in to pound everyone. You can pair characters that enhance strengths and cover weaknesses, or simply go all in with two rushdown characters; all options are workable in the right hands.

The perks system plays into this directly. Character leveling unlocks boosts to speed, dodging, jumps, and more. It’s smart to match up perks with your partner for a stacking bonus. Superman and Velma both have ice attacks, for example, so you can combo to increase that debuff. Unique signature perks play up character strengths as well. Even in this early state, the team/perk combos are staggering and kept me experimenting constantly.

Despite the strength of the current basic modes, the lack of variety needs to be addressed (and apparently will be soon with an arcade and ranked mode). The limited number of maps cover standard size and layout requirements, but none of them match the creativity and detail of a good Smash Bros. level. It’s neat to volley enemies off a Batmobile in the Batcave, but stages like a generic, empty coliseum and stock grassy field with waterfall left me wanting more.

Online play is fantastic thanks to rollback netcode and a massive cross-platform player base. I never had to wait for matches or deal with lag. Reindog – a new character created for the game – turned invisible a couple of times, but that’s about the extent of my technical problems.

MultiVersus is free-to-play on almost every console and PC, making it easy to access. However, this also triggers microtransaction anxieties. Thankfully, the fair economy provides plenty for players who don’t want to pay. Wonder Woman is free alongside a rotating roster of four characters. An early influx of gold pays for another character so you’re set with 6 of 17 in the roster in short order. The remaining grind is far slower, but not too daunting. And all characters are playable in a practice area. Paid content is limited mostly to cosmetics, instant character unlocks, and the premium tier of the Battle Pass.

The current free and paid mini Battle Passes and daily quests kept me busy throughout my time with MultiVersus. While I enjoyed unlocking content, the need to grind out repetitive bot matches to hit some numbers in a reasonable amount of time can be a slog. Completed seasonal goals annoyingly didn’t clear out for me so I had to dig into the menus and turn past a page of grayed-out items to check my progress constantly.

Living games have the potential to go in frustrating directions, but MultiVersus has a strong foundation. If it can meaningfully roll out content and smooth out its rough edges, this could become a new crossover obsession for years to come.