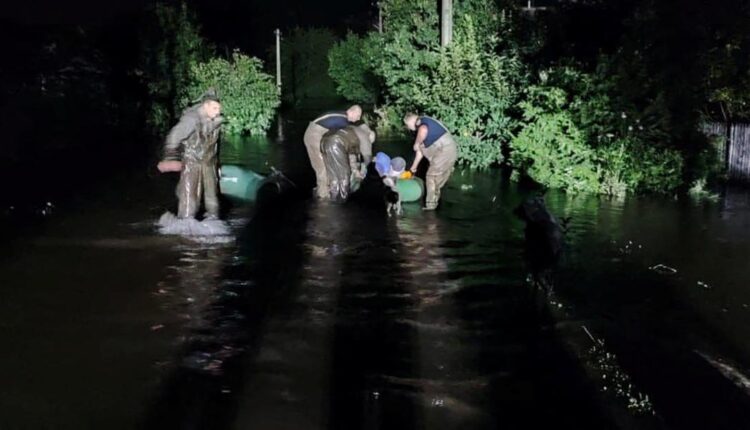 Ukrainian President Volodymyr Zelensky said Wednesday that Russia targeted the Karachunivske Reservoir, adding that it had no military value and the strikes would only impact local civilians.

The strikes destroyed a water pumping station and flooded the embankments, which are just a few meters from residential buildings, according to Ukrainian legislator Inna Sovsun.

Water spilled into the Inhulets River — the right tributary of the Dnipro River in southeastern Ukraine. Residents in districts across Kryvyi Rih were asked to evacuate their homes on Thursday to avoid flood-risk.

Emergency services and rescuers worked overnight and into Thursday, the head of the Dnipropetrovsk region’s civil military administration said in a Telegram post. Valentyn Reznichenko said teams had done an “incredible job.”

Water levels in the Inhulets River have now dropped by 50 centimeters (20 inches) after rising suddenly Wednesday, Andrii Kurach, head of the State Emergency Service of the Dnipropetrovsk region, said Thursday.

Flood levels in the local area have since receded, work to repair the damage was 50% complete and water supplies were being restored, a regional official said Thursday.

“The Karachunivske Reservoir is huge — there was a threat of a great flood. But thanks to coordinated actions, it was averted,” said Oleksandr Vilkul, head of the Kryvyi Rih civil military administration.

Following the attack, Zelensky delivered a pointed message to Moscow in which he referred to the Russian military as “weaklings.”

“Your missile attacks today, Russian missiles targeting Kryvyi Rih, the dam of the Karachunivske Reservoir, the objects that have no military value at all, in fact hitting hundreds of thousands of ordinary civilians, is another reason why Russia will lose. And not just this war, but history itself,” he said in his nightly address on Wednesday.

“History is written by people, never by savages. Who will you remain in history? All those who launch these missiles. Those who came to our land. Weaklings. You are weaklings waging a war against civilians,” he added.

“Scoundrels who, having fled the battlefield, are trying to do harm from somewhere far away. You will remain terrorists whom their own grandchildren will be ashamed of.”

Moscow’s attack on the reservoir comes days after a Russian missile strike hit a power and heating plant in the northeastern region of Kharkiv, leaving many without power.
During his visit to the newly liberated Izium on Wednesday, Zelensky said he was “shocked” by the levels of destruction left by Russian forces following their months-long occupation of the city in Kharkiv.

Suikoden I And Suikoden II Remasters Revealed, Releasing On Consoles And PC Next Year

Guizhou: 27 dead, 20 injured in China after Covid quarantine bus overturned in a ravine