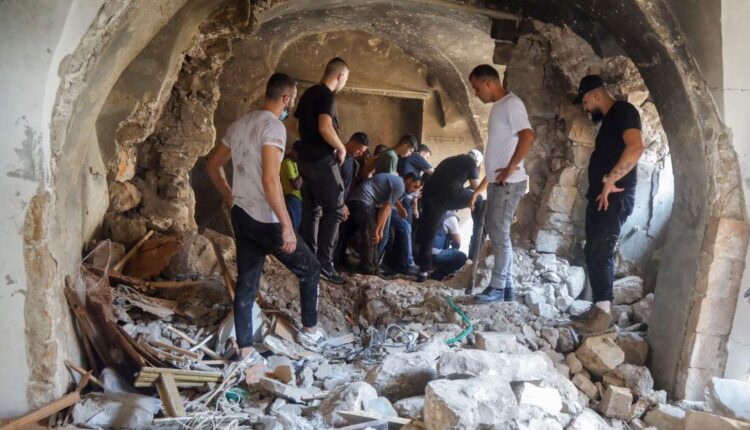 Among the dead is Ibrahim Al-Nabulsi, the apparent target of the Israeli raid. The other men killed have been named by Palestinian health ministry officials as Islam Sabbouh and Hussein Jamal Taha.

A statement from the Popular Resistance Committees (PRC), a loose affiliation of smaller armed groups, hailed the three men’s deaths as a heroic act of resistance.

While closely linked, the PRC is regarded as separate from the armed wings of the Islamic Jihad (the Quds Brigades) and Hamas (the Qassam Brigades) militant groups.

Israel has accused Al Nabulsi of involvement in a series of recent shooting attacks on Israelis in the West Bank.

Israeli forces surrounded a building in the old city of Nablus early Tuesday before targeting it with a shoulder-fired missile, an Israeli statement said, triggering an exchange of gunfire.

The Al-Quds Brigades, the military wing of the Palestinian Islamic Jihad militant group, said on Telegram that its members in Nablus were involved in “violent confrontations with enemy special forces as they stormed the old city.”

About 40 people were injured, several critically, in the violent exchanges, in addition to the three men killed, according to Palestinian health ministry.

The fatal clashes look set to test the strength of a ceasefire restored for Gaza just over 24 hours ago, which ended two days of Israeli airstrikes against Islamic Jihad targets and rockets fired towards Israel. The Gaza truce was still holding as of Tuesday.

An Islamic Jihad spokesman told CNN Tuesday that Israel was arresting and killing without any accountability.

“That is why we decided to resist with our weapons. If we don’t find weapons, we will resist with stones, but we will not give up,” spokesman Daoud Shihab said.

Tuesday’s raid comes on the heels of the worst hostilities between Israel and militants in Gaza in more than a year. On Friday, Israel launched what it called preemptive strikes on Islamic Jihad targets in the coastal enclave. At least 44 Palestinian militants and civilians, including 15 children, were killed in the violence, according to Palestinian officials, before a ceasefire was agreed to on Sunday night.

“All our goals were achieved. The entire senior military command of Islamic Jihad in Gaza was successfully targeted within three days,” he said.

The operation also took a toll on the civilian population of Gaza. Israel and Egypt have imposed a closure on Gaza since 2007, limiting access to the territory via land, air and sea, including tight restrictions on the movement of residents and the flow of goods.

Gaza’s sole power plant was forced to shut down on Saturday after it ran out of fuel, causing drastic cuts to electricity supplies for the territory’s two million people. Fuel transports resumed Monday through the Israeli-controlled Kerem Shalom crossing for the first time in a week, following the truce agreement.

Islamic Jihad, the smaller of the two main militant groups in Gaza, fired around 1,175 rockets towards Israel during the escalation, according to Israeli figures, mainly toward Israeli communities close to Gaza. The group also launched rockets toward Jerusalem and Tel Aviv.

Around 185 rockets landed inside Gaza, the Israel Defense Forces (IDF) said Monday. The Iron Dome aerial defense system, which is deployed against any incoming fire assessed to be a threat to people or buildings, and which intercepted the rockets fired at Jerusalem, was operating at a 96% success rate, an IDF spokesman said Monday.

A senior Israeli diplomatic official, speaking to reporters Monday, appeared to acknowledge that Israel’s campaign might have been responsible for some civilian deaths, as well as those of militants, saying that initial assessments were that “most” civilian casualties were the result of errant rocket fire from Islamic Jihad. Civilian casualties were always a tragedy, the official said.

In one incident Saturday, four children were among seven people killed in an explosion in Jabaliya in northern Gaza. The Palestinian health ministry said the blast was caused by an Israeli airstrike, but Israel rejected the claim, blaming errant rocket fire. The IDF released a video showing what it said was an Islamic Jihad rocket apparently suddenly losing power and falling to the ground over a built-up area.