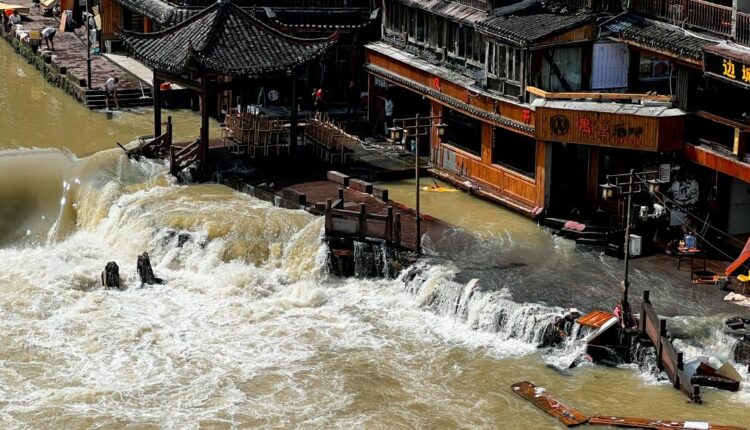 In Hunan province, 10 people have been killed this month and three remain missing, with 286,000 people evacuated and a total of 1.79 million residents affected, officials said at a news conference Wednesday.

More than 2,700 houses have collapsed or suffered severe damage, and 96,160 hectares of crops have been destroyed — heavy losses for a province that serves as a major rice-producing hub for China. Direct economic losses are estimated at more than 4 billion yuan ($600 million), according to officials.

Chinese authorities are on high alert for this year’s flood season, which started this month, after the deaths of 398 people in devastating floods caused by unprecedented rainfall in central Henan province last summer.

Summer floods are a regular occurrence in China, especially in the densely populated agricultural areas along the Yangtze River and its tributaries. But scientists have been warning for years that the climate crisis would amplify extreme weather, making it deadlier and more frequent.

Global warming has already made extreme rainfall events more intense in the eastern Asian region, which includes southern China. The intensity and frequency of extreme rain events are expected to rise the more the Earth warms, the latest science from the Intergovernmental Panel on Climate Change shows. The number of strong tropical cyclones have also increased.

Henan, traditionally not a region that faces regular flooding, saw what authorities called a “once in a thousand years” downpour at some weather stations last July.
The provincial capital of Zhengzhou, which accounted for the majority of the death toll, was ill-prepared for the flooding. City officials failed to heed the five consecutive red alerts for torrential rain — which should have prompted authorities to halt gatherings and suspend classes and businesses. Flood water gushed into the tunnels of the city’s subway system, trapping hundreds of passengers and killing 12 of them.

The tragedy gripped the nation, raising questions over how prepared Chinese cities are for extreme weather.

Ahead of this year’s flood season, Chinese authorities had warned a high number of “extreme weather events” were expected to hit the country. Extreme torrential rains are likely to lash the southern and southwestern parts of the country, as well as southern Tibet, according to China’s National Climate Center.
In April, the Ministry of Housing and Urban-Rural Development and the National Development and Reform Commission told Chinese cities to learn from the disaster in Zhengzhou and do their best in preventing urban flooding given the “acute influence of extreme weather events” this year.

Simiso Buthelezi: Boxer dies after collapsing at end of fight in South Africa

Among Us VR Gets Hilarious Gameplay Trailer, Release Period Confirmed