Ukraine’s natural environment is a casualty of war. The damage could be felt for decades 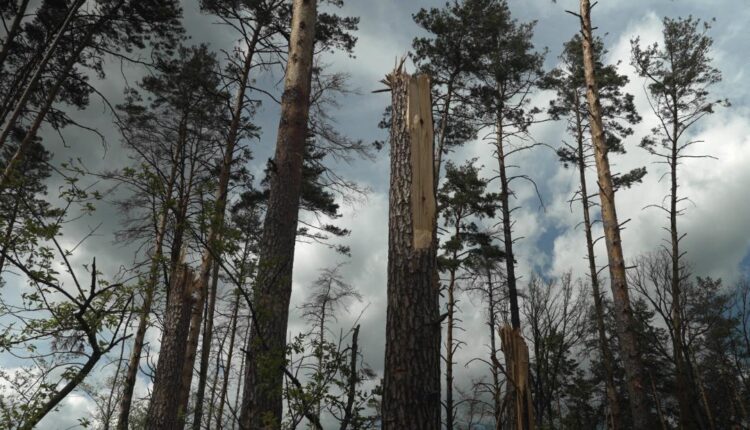 “It’s a place full of memories. Vorzel, Irpin, Bucha, the forests, the fresh air. For me, this is a place of respite,” the 64-year-old environmental scientist told CNN during a recent trip to Irpin.

The hour-long journey from Kyiv — a trip he has made many times over the decades — was filled with anguish for Bondarenko, who worried what he would find in Irpin. “This is the first time I am coming back since our brothers ‘visited’ Irpin,” he said, referring to Russian troops.

In addition to the human toll, the destruction Russian forces caused to the landscape here is brutal and omnipresent: Scorched earth, forest floors ravaged by missiles, and trees broken down and uprooted, while abandoned military equipment litters the ground. Many of the town’s neat houses lie in ruins; the woodland and green spaces around them are off limits.

Anzhelika Kolomiec, Bondarenko’s friend who lives in Irpin, told CNN the authorities have banned people from going into the woods. “We have a beautiful forest here, but this year there won’t be any walks, there won’t be any mushroom picking, there won’t be berries. We are not allowed to go in because of mines and unexploded missiles,” she said.

Craters created by shelling are scattered across a field in Moschun.

While the world’s eyes are focused on the human suffering brought about by Russia’s invasion, environmental experts in Ukraine are keeping a close record of the environmental damage it has caused, to try to repair it as soon as possible, and in hopes of extracting reparations.

The mined and destroyed forest in Irpin is just one example of the environmental damage caused by Russia’s war on Ukraine.

Satellite images show large swaths of eastern and southern Ukraine are currently engulfed in wildfires sparked by explosions and made worse by the fact that emergency services, forest management workers and the army are unable to get to them. The smoke from the fires is polluting the air.

Spilled fuel is polluting ground waters and ecosystems are being hammered by tanks and other heavy technology. All of this is damage that will be felt for decades after the war ends.

Most people may not see nature as a priority, at least not right now, when Ukraine’s future is at stake and people are dying every day amid the conflict.

“When you see the crimes against humanity, the unbelievable atrocities, people being killed, tortured, raped, hundreds of them … it is natural not to think about environmental impacts,” said Natalia Gozak, executive director of the Center for Environmental Initiatives in Kyiv.

“So it’s our task to pay attention and ensure that these types of crimes are also considered as a crime and that the Russians pay for everything — not only for killing people, but also for killing our future and impacting our future wellbeing.”

Bondarenko took part in the battle for Kyiv in March. He and his son joined the Territorial Defense Force — the mostly volunteer section of Ukraine’s armed forces — in the first days of the war.

He has now been released from duty because of his age and is slowly returning to his environmental work. He wants Ukraine to be ready to start rebuilding in a smart, sustainable way when the war ends.

“We are faced with a much larger crisis now and have to put everything else aside, although I think very soon we will return to the environmental agenda and we have to start thinking about that now,” he said.

Experts like Bondarenko and Gozak are also trying to raise awareness of the risks stemming from the environmental damage.

Bondarenko is a nuclear physicist by training and has spent a large part of his career working on environmental safety in the Chernobyl zone. The risk of nuclear pollution is high on everyone’s mind after Russian troops entered Chernobyl and targeted Europe’s largest nuclear power plant in Zaporizhzhia in southern Ukraine.

Wim Zwijnenburg, the leader of the Humanitarian Disarmament Project at PAX, a Dutch peace organization, said international organizations are starting to pay more attention to the environmental damage caused by armed conflicts.

“What we saw in Iraq and Syria is that environmental pollution caused by the war can pose acute risks to the health of people,” he said.

“But no one was paying attention to it. Everyone thought the environment is something you know, for ‘tree huggers’ and people who like bees and butterflies, but then the reality on the ground was that people, and particularly children, can be exposed to toxic remnants of war, all kinds of chemical materials from bombs and factories, or other kinds of hazardous chemicals.”

Because of these past experiences, environmental scientists and humanitarian organizations have started building and using databases of sites that are known to contain hazardous materials.

Now, when they receive information about an attack, they can crosscheck the database to estimate an impact on the surrounding ecosystems.

The Center for Environmental Initiatives has built an interactive map of incidents across Ukraine, breaking them down by the type of damage, including nuclear and chemical pollution, dangerous livestock waste and degradation of land and marine ecosystems.

“During these massive attacks, tons of toxic and carcinogenic chemicals, including uranium, get into the soil,” said Olena Kravchenko, executive director of Environment People Law, an environmental think tank in Lviv.

She said the huge amounts of missiles, explosives and other types of weapons and discarded military technology used in war are not the only cause of pollution. Mass burials conducted without consideration for environmental safety can also cause long-term ground water and soil contamination. Ukraine has accused Russia of burying bodies in hastily dug mass graves to cover up war crimes.

The shared monitoring system can also help set priorities in situations where resources are extremely limited.

“Most environmental damage can be addressed after the conflict, but there’s that 5 to 10% where you need to send in experts because there are certain types of chemicals where you need experts to clean it up and not people who don’t know so much about it,” Zwijnenburg said.

Sometimes, the damage may not be immediately obvious.

When the Ukrainian army shot down a Russian missile flying over the Kremenets district in western Ukraine last month, some of the debris fell on an agricultural facility, according to the Ternopil Regional State Administration.

The impact site was cleaned up within a few hours, but the poisonous substances that leaked during the incident lingered in the soil and water for days, according to State Ecological Inspectorate of Polissya District.

People in the surrounding villages were told not to drink water from their wells and a few days after the incident, dead fish were reportedly discovered in a river several miles away.

When the State Ecological Inspectorate of Polissya District measured the ammonium levels in the river it found that they were 163 times higher than what is considered safe.

An abandoned wreck of a Russian armoured vehicle lies in the forrest in Irpin.

Animal populations, too, are suffering as a result of the conflict. Experts say the unique habitats on the coast of the Azov Sea in southern Ukraine are being irreparably degraded as Russia continues to pound the area with missiles and bombs.

Petrovich told CNN that the fires were sparked by exploding rockets; he said continued shelling in the area makes it difficult to extinguish the fires. “Another reason is a lack of equipment and the shortage of fuel for firetrucks,” he said.

The Tuzly Lagoons National Nature Park near Odesa is usually a haven for dozens of bird species that go there to nest. This year, most weren’t able to do that, Ivan Rusiev, a biologist and the head of the scientific department of the park, told CNN.

Rusiev estimates Russian troops have dropped around 200 bombs on the park.

“All living beings feel the impact of this aggressive war,” he said, adding that the few birds that have managed to have chicks are now unable to feed them properly. The area is famous for its white and dalmatian pelicans, Rusiev said, with a peacetime population of about 1,500. “Now there are only a handful of birds,” he said.

Rusiev said that the sudden increase in warship and submarine numbers in the Black Sea is causing further harm. “We found dead dolphins on the shore killed by the low frequency sonars,” he said.

Environmental scientists and activists are already gathering evidence of the damage inflicted on nature by the war, hoping to use it in the future.

“When we triumphantly defeat [the Russians], we will be able to count the real damage and present it to the barbarians who treacherously attacked us,” Rusiev said.

An environmental NGO, Save Dnipro, has built a chatbot — software that simulates human-to-human conversation — to make it easier to access data on pollution and to report suspected environmental war crimes. They are compiling the list and factchecking against open sources, but the verification and proper investigation will be up to the authorities.

But getting war reparations for ecological damage is a tall order. Zwijnenburg said that under current international law, the bar is “really high.”

“To reach the threshold where governments can be held accountable for environmental damage, it needs to be severe, long-term damage to the environment before you can actually say it’s a war crime. And the only time this bar or the threshold has been crossed was in 1991, when Iraq set fire to hundreds of oil wells in Kuwait,” he said.

The United Nations Compensation Commission ordered Iraq to pay Kuwait roughly $3 billion for the environmental damage it caused during the 1990 invasion as part of its $52.4 billion war reparations package.

Many activists are also worried about further damage being caused unnecessarily in the name of the war effort.

An investigation conducted by the European Union in 2017 and 2018 into Ukraine’s forestry sector said its forest control system was “not functioning properly.” That report, published in 2020, found that evidence from the ground “points to a culture of widespread corruption and illegal logging.”

Ukrainian national watchdogs have largely suspended their environmental protection work because of the war. Kravchenko told CNN that could lead to national resources being exploited.

Back in Irpin, nature is slowly fighting back. Next to the wreck of a burnt-out Russian armored vehicle, green shoots are beginning to emerge on a damaged tree. The lilac bushes standing outside homes along the road through the forest are bursting with color.

The huge exodus of people from the capital, combined with acute shortages of fuel mean that, paradoxically, air quality in the region is now better than it has been in years.

“I believe we have a chance, despite the war, to make cardinal changes in our attitude towards nature, environmental protection, energy and our use of green resources,” he added.

The town of Irpin takes its name from the Irpin River, which meanders through the region before flowing into the Dnipro.

“The river played an important role in the defense of Kyiv,” Bondarenko said. “Our armed forces blew up bridges and were forced to open dams to flood the Irpin riverbed to stop the invaders from crossing it on pontoon bridges and coming to Kyiv.”

When the army opened the dam on the Irpin River in Demydiv on the second day of the war, vast ancient wetlands that were drained during the Soviet era returned to their original state — and helped to protect Kyiv in the process.

Makgeolli: How Korean rice wine is stepping out of soju’s shadow