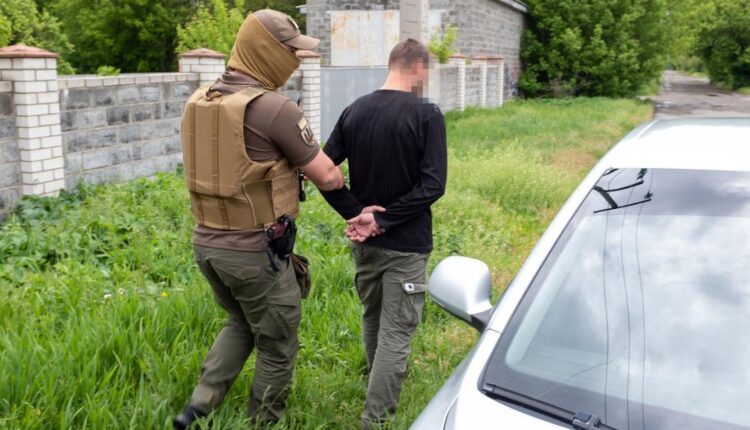 From the other direction, a van swerves, and two men in combat fatigues and face coverings jump out. The man in black drops to the ground, as if by instinct. The officers — from Ukraine’s security service, or SBU — pat him down and retrieve their prized evidence: His mobile phone.

In eastern Ukraine, the thuds of duelling Russian and Ukrainian artillery are a near-constant presence. Much of the Russian shelling is indiscriminate, but some is aimed at high-value targets like military encampments, arms depots, or the SBU’s own headquarters in Kramatorsk, which was partially destroyed in the opening weeks of the war.

The SBU says Russian forces rely heavily on collaborators like the alleged spy CNN saw being arrested in Sloviansk this weekend to pinpoint their targets and evaluate the success of their hits.

When confronted by an SBU investigator on the scene, the suspect quickly admits to communicating with the enemy.

“What did he ask you for?” asks the investigator.

“Coordinates, movements and so on,” the suspect says, head downcast. “The locations of the hits. That sort of thing. The situation in general, and so on.”

“Did you understand why he needed the coordinates?”

“Yes, I understand. I realize.”

The SBU here say they’re carrying out stings like this once or twice a day. This man has been under investigation for just four days.

Some of the suspects are classic infiltrators: Russian citizens, brought to the Donbas region at the beginning of the war, who live among the population. Others are political sympathizers. But the man leading today’s sting, who we’re calling Serhiy, says most people spy for money.

“There are fewer and fewer ideological traitors,” he says. “Even those who supported the aggression of the Russian federation in 2014 in the Donbas, during the creation of the so-called DPR and LPR [Donetsk and Luhansk People’s Republics] — when they saw what happened with Mariupol, Kharkiv, Kyiv, Bucha and dozens and hundreds of other localities, they started to change their world view about Russia.”

The suspect this weekend tells the investigator that he was offered just 500 hryvnia, or around 17 dollars, in exchange for targeting information. He says he was recruited through the messaging app Telegram by someone identifying himself as “Nikolai.”

The investigator reads out their exchanges as SBU agents stand with pistols unholstered.

“You did a good job yesterday,” wrote Nikolai. “The same information is needed today. Photos, videos, geo-data of the military on the CNIL [a military encampment]. How long does it take to get the information?”

“Ok, waiting,” Nikolai replied. “Be careful. Pay attention to the cameras so they don’t see you. Take photos and videos secretly.”

The investigator explains to the suspect that they’re seizing his phone.

“Who do I call to inform about your detention?” the investigator asks.

“My mother,” the suspect says.

“Do you remember the number?”

“There’s a number in the phone.”

With that, the man is led to the SBU’s unmarked car, and driven away. Serhiy says he will be transferred west, to Dnipro, where he will face trial. If it is proven that his spying led to death or “severe consequences,” a conviction could send him to prison for the rest of his life, Serhiy says.

“These missiles come at the coordinates which are transmitted by such criminals,” he tells us back at headquarters. “People die because of these missiles. Our soldiers are killed, and civilians are killed.”

He says he tries to keep his anger at bay, but it’s hard not to take the betrayals personally.

“Every time I arrest someone like him, I know one thing: I’m from here myself. My loved ones, all my relatives, are from Lyman” — a nearby town that has been under heavy Russian bombardment for weeks — he says.

“At the moment, they have no place to live, they have nothing. They have nowhere to come back to. I remember it every time. I remember the Kramatorsk railway station every time,” he says, referring to a Russian airstrike in April that killed at least 50 people.

“We were picking people up, piece by piece.”