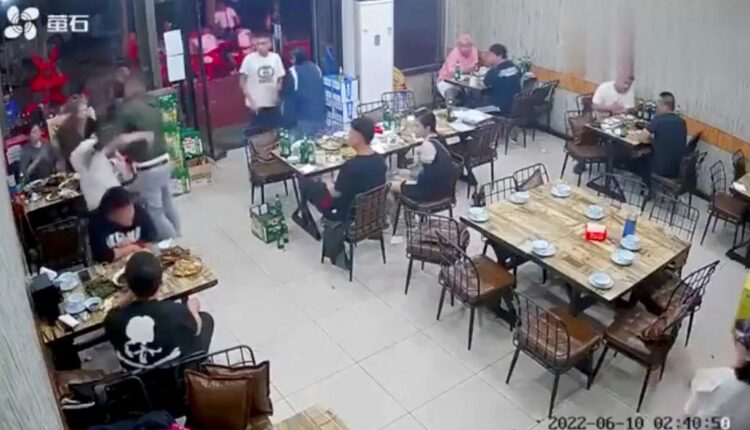 Graphic security footage showing scenes from the incident was posted on social media on Friday, triggering national outrage and sparking heated discussions online about women’s safety and rights in China.

Time-stamped surveillance footage circulating widely online shows a man walking into a barbeque restaurant at around 2:40 am local time on Friday and walking past a woman who is sitting down and eating with her companions. The man is seen approaching one of the women and placing his hand on her back, before she grabs him by the wrist and pushes him away.

The woman can be heard questioning him, surveillance footage shows. Following the woman’s resistance, the man responds by slapping the woman in the face.

A scuffle between the two begins, surveillance footage shows. The woman tries to get him away by attempting to hit him with a glass bottle.

Surveillance footage shows the woman’s friends trying to stop the fight and being beaten by the man as well as a group of other men who rush into the restaurant.

In the footage, several women can be seen being punched, kicked, grabbed and dragged by the hair on the ground.

The graphic video footage showing the women being beaten caused a national outcry over women’s safety. After the video went public, Tangshan police published a statement on Friday afternoon saying they had identified the suspects and were searching for them.

In another statement issued on Friday, Tangshan police said two women had been sent to the hospital after being attacked and were in stable condition, while two other women sustained minor injuries,

On Saturday, local police sent an update saying that they have detained all nine suspects, including seven men and their two female companions. The update said the two female victims who had sustained non-life-threatening injuries were being treated in the hospital and were in stable condition.

The incident was widely discussed on Chinese social media over the weekend and triggered public anger in the country. Some people online are questioning the safety of women in China, while others are discussing systemic violence against women in the country.

Many celebrities have also come out to show support for the victims. Actor Jackie Chan posted on his Weibo account, saying, “I’m so angry and I can’t sleep the whole night. What saddens me the most is that only women stepped in to help each other, while the men standing by did nothing.”

Provincial authorities ordered the criminal investigation of this case to be moved to Langfang, a separate city in Hebei province, according to a statement by Langfang police late Saturday.

Such a move usually happens when the investigation is sensitive or important, or when the cases involve gang-related crimes and need to avoid local sheltering.