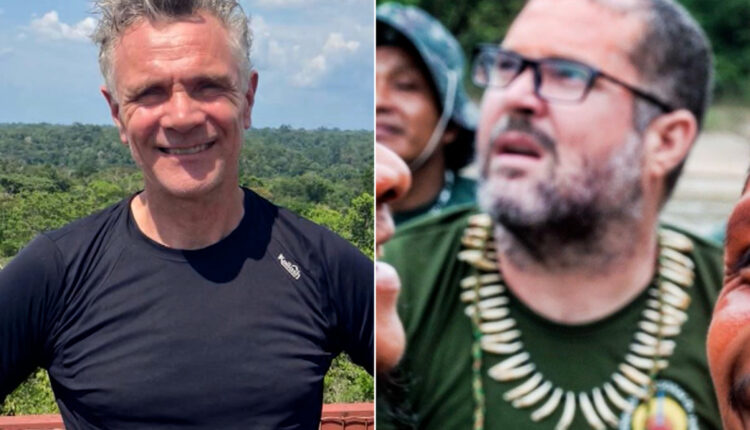 Police followed the suspect’s directions to human remains in the jungle, but forensic analysis to identify them has not yet been completed.

“Although we are still awaiting definitive confirmations, this tragic outcome puts an end to the anguish of not knowing Dom and Bruno’s whereabouts. Now we can bring them home and say goodbye with love,” said Phillips’ wife Alessandra Sampaio in a statement.

The pair, who were first reported missing on June 5, had received death threats prior to their departure, according to the Coordination of the Indigenous Organization, known as UNIVAJA. Each was well versed in the area’s often-violent incursions by illegal miners, hunters, loggers and drug-traffickers — but they were equally dedicated to exposing how such activity plagues Brazil’s protected wild areas, endangers its indigenous peoples, and accelerates deforestation.

Pereira, a 41-year-old father of three, spent much of his life in service of the country’s indigenous peoples since joining the Brazilian government’s indigenous agency (FUNAI) in 2010. He told CNN that the agency’s Isolated and Newly Contacted Indigenous Coordination Office had made a major expedition to contact isolated indigenous people under his leadership in 2018, and that he had participated in multiple operations to expel illegal miners from protected lands.

Pereira’s passion was evident in an interview with CNN last year. “I can’t stay away for too long from the parentes,” he said, referring to the region’s indigenous people with the affectionate term “relatives.”

Phillips, 57, a widely respected British journalist who had lived in Sao Paulo and Rio de Janeiro, brought environmental issues and the Amazon to the pages of the Financial Times, The Washington Post, The New York Times and, principally, The Guardian. Pereira was on leave from FUNAI amid a broader shake-up of the agency when he joined Phillips to assist in research for a new book.

The planned book would be titled “How to save the Amazon.”

In a video filmed in May in an Ashaninka village in northwestern Acre state, and released by the Ashaninka association, Phillips can be heard explaining his endeavor: “I came here (…) to learn with you, about your culture, how you see the forest, how you live here and how you deal with threats from invaders and gold diggers and everything else.”

Home to thousands of indigenous people and more than a dozen uncontacted groups, Brazil’s vast Javari Valley is a patchwork of rivers and dense forest that makes access very difficult. Criminal activity there often passes under the radar, or is confronted only by indigenous patrols — sometimes ending in bloody conflict.

In September 2019, indigenous affairs worker Maxciel Pereira dos Santos was murdered in the same area, according to Brazil’s Public Prosecutor’s Office. In a statement, a FUNAI union group cited evidence that dos Santos’ murder was retaliation for his efforts to combat illegal commercial extraction in the Javari Valley, Reuters reported at the time.

Across Brazil, standing up to illegal activity in the Amazon can be deadly, as CNN has previously reported. Between 2009 and 2019, more than 300 people were killed in Brazil amid land and resource conflicts in the Amazon, according to Human Rights Watch (HRW), citing figures from the Catholic non-profit Pastoral Land Commission.

Critics have accused President Jair Bolsonaro’s administration of emboldening the criminal networks involved in illegal resource extraction. Since coming to power in 2019, Bolsonaro has weakened federal environmental agencies, demonized organizations working to preserve the rainforest, and rallied for economic growth on indigenous lands — arguing that it is for indigenous groups’ own welfare — with calls to “develop,” “colonize,” and “integrate” the Amazon.

Pereira last year lamented the diminished state of Brazil’s environmental and indigenous protection agencies under Bolsonaro’s presidency. But he also saw a bright side, telling CNN that he thought the shift would push the Javari Valley’s indigenous peoples to overcome historical divisions and form alliances to protect their shared interests.

However, in another interview with CNN, later in the year, he was more circumspect about the dangers. Having just returned from a trip in the rainforest, his feet and legs covered with mosquito bites, Pereira described a backlash from criminal groups to indigenous territorial patrols.

“[The patrols] took them by surprise, I think. They thought that since the government withdraw from operations, they would get a free pass on the region,” Pereira said.

But neither Pereira nor Phillips were going to give a “free pass” to exploitation of the Amazon.

“Dom knew the risks of going to the Javari Valley, but he thought that the story was important enough to take those risks,” Jonathan Watts, global environmental editor for the Guardian told CNN.

“We knew it was a dangerous place, but Dom believes it is possible to safeguard the nature and the livelihood of the indigenous people,” said his sister, Sian Phillips, in a video last week urging the Bolsonaro government to intensify its search for the pair.

On Wednesday, Jaime Matsés, another local indigenous leader in the Javari Valley, told CNN he had recently met with Pereira to discuss a new potential project monitoring illegal activity in his community’s territory.

“He seemed happy,” Matsés recalled. “He wasn’t afraid to do the right thing. We saw him as a warrior like us.”

And if their disappearance was intended to instil fear among those who would follow in their footsteps, it has backfired, Kora Kamanari, another local leader, told CNN on Wednesday.

“We are more united than before and will keep on fighting until the last indigenous is killed.”