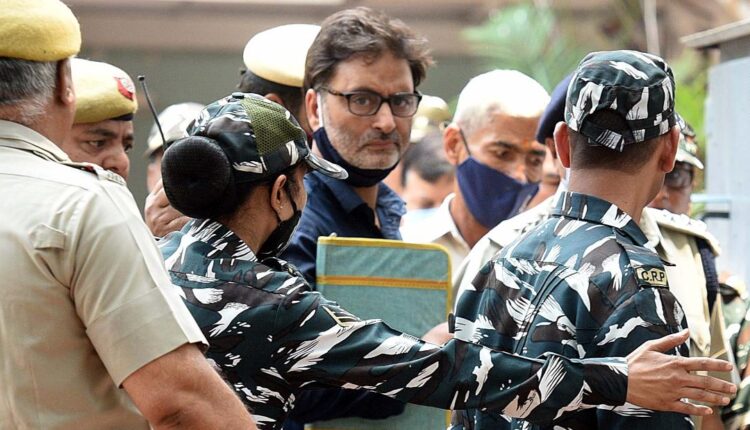 Malik, head of the Jammu and Kashmir Liberation Front (JKLF), had pleaded guilty to the charges but on Wednesday told the special court where his trial was held that he had been practising non-violent politics in Kashmir after giving up arms in the 1990s.

Mainly Hindu India has been fighting an armed militancy in Muslim-majority Kashmir, also claimed by neighboring Pakistan, for decades.

“It is high time that it is recognized that terror funding is one of the gravest offences and has to be punished more severely,” Special Judge Parveen Singh said in the court in New Delhi, announcing Malik’s life imprisonment under a section of the Unlawful Activities Prevention Act.

The court is designated for cases brought by the National Investigation Agency (NIA), which mainly handles offenses deemed to affect the sovereignty, security and integrity of India.

According to the Indian government, Malik had been at the “fore-front of separatist activities and violence since 1988” in the Kashmir valley. It says many Kashmiri Hindus had to flee because of violence committed against them by Malik’s group in 1989.

Malik, who was convicted last week, had pleaded guilty to the 10 charges brought against him by the NIA, including waging or attempting to wage war against the government, and helping raise funds for anyone to “commit a terrorist act”.

The court said Malik “did not want any trial and therefore, he was ready to plead guilty.”

His wife Mushaal Hussein Mullick said the sentencing was illegitimate.

“Verdict in minutes by Indian kangaroo court,” she wrote on Twitter. “The iconic leader will never surrender.”

Pakistan Prime Minister Shehbaz Sharif said it was a “black day” for Indian democracy and its justice system.

“India can imprison Yasin Malik physically but it can never imprison idea of freedom he symbolises,” Sharif said on Twitter.

Political parties in Kashmir said Malik’s verdict was a setback to peace efforts.

“We are afraid that this will further compound the uncertainties in the region and will only fuel more alienation and separatist feelings,” a group of parties that have in the past fought elections in Kashmir said in a statement.

At least four dead following series of explosions in Afghanistan