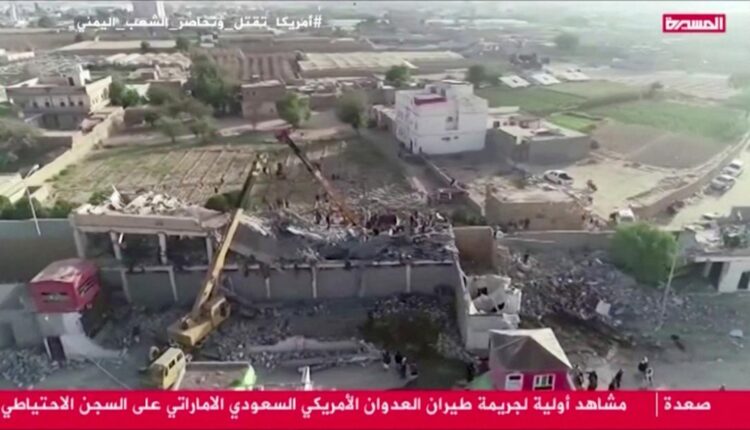 The Iran-back Houthi rebels, who control much of Yemen, blamed the Saudi-led coalition for the strike in the northern city of Sa’ada. On Saturday, a spokesman for the coalition, Brigadier Gen. Turki Al-Maliki, called those claims “baseless and unfounded,” according to Saudi state news agency SPA.

At least 70 people were killed and 130 injured in the attack, according to Doctors Without Borders (MSF).

Another airstrike early Friday hit a telecommunications building in the strategic port city of Hodeidah, causing a nationwide internet blackout, according to NetBlocks, an organization that tracks network disruptions. At least three children were killed in that attack, Save the Children said.

The Norwegian Refugee Council said the internet blackout, which was still ongoing as of Friday evening, would affect aid delivery.

SPA reported Friday that the coalition said it also attacked “military targets” in the capital, Sanaa, on Friday, claiming to have conducted the operation “in response to the threat of hostile attacks.”

The coalition launched an offensive in 2015 to restore Yemen’s internationally recognized government after it was ousted by the Houthis. The coalition has intensified its attacks in the wake of a deadly Houthi missile and drone strike in the UAE capital Abu Dhabi earlier this week.

The International Committee of the Red Cross said Friday it was “deeply concerned about the intensification of hostilities” and “deplores the human toll this escalation has caused.” US Secretary of State Antony Blinken also called for deescalation.

“The escalation in fighting only exacerbates a dire humanitarian crisis and the suffering of the Yemeni people,” Blinken said in a statement.

The Houthi-run media outlet Al Masirah showed graphic video of people under rubble in the aftermath of Friday’s detention center strike. The Red Cross said it had sent emergency medical supplies to two hospitals that had received a “very high” number of casualties.

“From what I hear from my colleague in Sa’ada there are many bodies still at the scene of the airstrike, many missing people,” said Ahmad Mahat, head of the MSF mission in Yemen. “It is impossible to know how many people have been killed. It seems to have been a horrific act of violence.”

An MSF-supported hospital in Sa’ada has been overwhelmed by an influx of wounded people and cannot receive more, Mahat said. Two other hospitals in the city have also received large numbers of casualties, according to MSF.