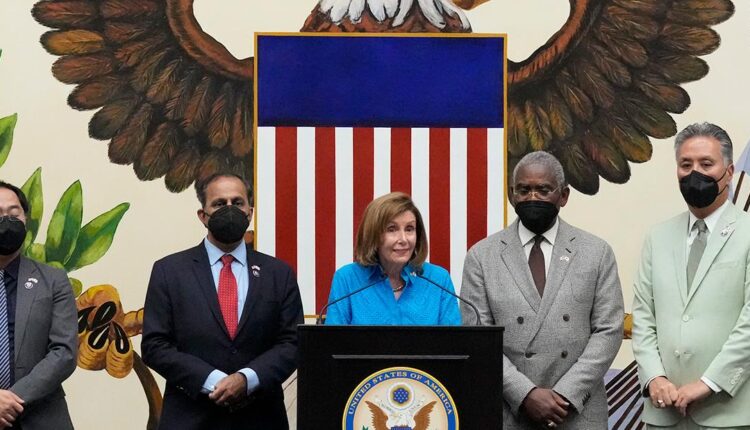 It suspended its anti-drug cooperation with the US, which has already been strained in recent years. The US has blamed China for failing to stop synthetic opioids reaching the US as both Beijing and Washington disagree on how to counteract the problem.

The moves come after Beijing announced that it would sanction Pelosi and her immediate family over the visit to Taiwan, and as it stepped up military drills and warplane incursions around the island.

Earlier Friday, China’s Foreign Ministry condemned Pelosi for what it described as her “vicious and provocative actions,” saying her trip to Taiwan amounted to “seriously interfering in China’s internal affairs.”

“In response to Pelosi’s vicious and provocative actions, China has decided to impose sanctions on Pelosi and her immediate family,” the statement said.

Pelosi’s visit to Taiwan on Wednesday, when she met President Tsai Ing-wen and other leaders, has infuriated China’s Communist Party, which views the self-governed democratic island as its territory — despite never having controlled it.

At a news conference in Tokyo during the last stop of her Asia tour, Pelosi struck a defiant tone, saying China had sought to isolate Taiwan from the international community but would not prevent US officials from traveling there.

“We will not allow (China) to isolate Taiwan,” the California Democrat said Friday. “They are not doing our travel schedule.”

Ahead of the visit, Beijing had warned it would take “forceful measures” if Pelosi went ahead, and on her departure it launched live-fire military exercises and sent missiles over Taiwan for the first time.

Taiwan’s Defense Ministry said as of 11 a.m. Friday, several Chinese military jets and warships had conducted exercises around the Taiwan Strait and crossed the median line — the halfway point between the island and mainland China.

On Thursday, China sent 22 warplanes into Taiwan’s air defense identification zone (ADIZ), all of them crossing the median line.

A number of countries, including from the G7 grouping of some of the world’s largest economies, have criticized China’s drills, urging Beijing not to change the status quo in the region.

In her comments on Friday, Pelosi said the visit to Taiwan had been about maintaining the status quo.

“It’s about the Taiwan Relations Act, the US-China policy, all of the pieces of legislation and agreements that have established what our relationship is — to have peace in the Taiwan Strait and to have the status quo prevail,” she said.

Pelosi also rejected suggestions by some critics that her visit had more to do with burnishing her legacy than benefiting the island, calling the claim “ridiculous.”

She pointed to Taiwan’s “free and open democracy,” successful economy and relatively progressive LGBTQ rights. “This isn’t about me — it’s about them,” she added. “It’s about Taiwan, and I am proud to have worked over the years to showcase the concerns that they have with mainland China.”

Meanwhile Japanese Prime Minister Fumio Kishida on Friday called for an immediate halt to China’s drills, saying they were “a serious issue concerning the security of our country and its people.”

Amid worsening relations, China canceled a planned meeting between the Chinese and Japanese foreign ministers.

On Thursday, China’s Vice Foreign Minister Deng Li summoned envoys to China from European countries, the EU and Japan in protest of their statements regarding Taiwan.

The G7 statement “distorts the facts” and is a “blatant political provocation,” said Deng, who accused the countries involved of interfering with China’s internal affairs.

Pelosi’s visit to Taiwan was the first by a sitting House speaker in 25 years, since then-House Speaker Speaker Newt Gingrich’s visit in 1997. Her Asia tour also included stops in Malaysia, Singapore, South Korea and Japan.

CNN’s Gawon Bae and Yong Xiong in Seoul, Emiko Jozuka in Tokyo, Eric Cheung in Taipei, and Sam Fossum in Washington contributed to this report.