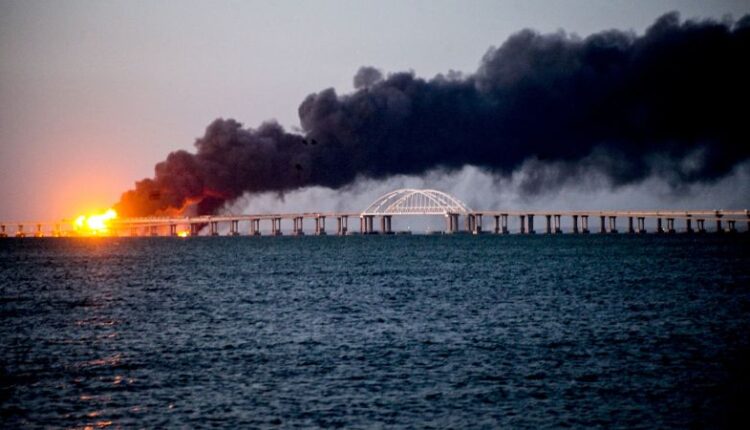 Russian President Vladimir Putin will hold an operational meeting of his Security Council on Monday, just two days after a massive explosion on a key strategic bridge linking Crimea and Russia.

The meeting itself isn’t out of the ordinary – Putin regularly holds operational meetings with the Security Council, usually on a weekly basis, according to TASS. However, it comes just days after a major humiliation for the Russian President, when an explosion severely damaged parts of the road and rail bridge between annexed Crimea and the Russian Federation early Saturday.

And while the agenda has not been made public, the meeting comes at a strategic crossroads for the Kremlin, which must make a series of unenviable choices after Russia’s brutal invasion of Ukraine has faltered after a month of military setbacks.

Some road traffic and train traffic has resumed on the estimated $3.7 billion bridge. On Saturday, Russian Deputy Prime Minister Marat Khusnullin said repair works on the bridge would be carried out around the clock, with a damage survey to be completed within a day and divers scheduled to check all the supports of the bridge.

The first passenger services resumed travel across the bridge on Saturday, traveling from the Crimean Peninsula to Krasnodar Krai in southern Russia, Russia’s Ministry of Transport said in a statement.

Car traffic on the bridge has also restarted in two lanes, Deputy Prime Minister of Russia Marat Khusnullin said on Sunday. “Traffic has already been launched along two lanes on the Crimean bridge,” he wrote in a Telegram post, adding that earlier, one lane was being used for cars traveling in alternate directions, slowing down traffic. Heavy trucks, vans and buses have been traveling by ferry since the blast.

Kyiv has not claimed responsibility for the blast on the enormous 19-kilometer (about 12-mile) bridge, which was built after Moscow annexed Ukraine’s Crimean Peninsula in 2014, an annexation regarded by the West as illegal.” The crossing was opened by Putin himself in 2018, and Ukrainian reaction to the explosion has been gleeful and triumphant.

Putin called the explosions on the Crimean bridge a “terrorist attack” and said the organizers and executors were “Ukrainian special services.”

“Here, as reported, we have no doubts that this is a terrorist attack aimed at the destruction of the critical infrastructure of Russian Federation. And authors, executors, and masterminds are the secret services of Ukraine,” Putin said during a meeting with Chairman of the Russian Investigative Committee Alexander Bastrykin on Sunday.

A round of Russian missile strikes on the southern Ukrainian city of Zaporizhzhia killed 13 people early Sunday, including one child, according to Kyrylo Tymoshenko, deputy head of the Office of the President of Ukraine.

According to Tymoshenko, the rescue and search operations are still ongoing, they continue to get people out from under the rubble.

Peskov was asked by RIA whether the attack on the bridge could trigger an activation of Russia’s nuclear doctrine because it was “aimed at destroying critical civilian infrastructure of the Russian Federation.”

“No. It’s a completely wrong formulation of the question,” Peskov said.

Ukraine’s military has been making dramatic advances in a counteroffensive – the Ukrainian military has recaptured 2,400 square kilometers of territory in Kherson region in the south of the country “since the beginning of the full-scale war,” a senior Ukrainian official said Friday, and Ukrainian troops are preparing for further advances into Russian-held Luhansk in the east, according to Serhiy Hayday, head of the Luhansk region’s Ukrainian military administration.

Hayday acknowledged photographs of Ukrainian troops outside the Luhansk village of Stelmakhivka, less than 20 kilometers (12 miles) northwest of the crucial post of Svatove.

But with a sudden and successful Ukrainian offensive comes concerns Putin will escalate Russia’s war in Ukraine, with US President Joe Biden expressing fears of the possible use of weapons of mass destruction.

“First time since the Cuban missile crisis, we have a direct threat of the use (of a) nuclear weapon if in fact things continue down the path they are going,” Biden warned during remarks at a Democratic fundraiser in New York on Friday.

He added: “I don’t think there’s any such thing as the ability to easily (use) a tactical nuclear weapon and not end up with Armageddon.”