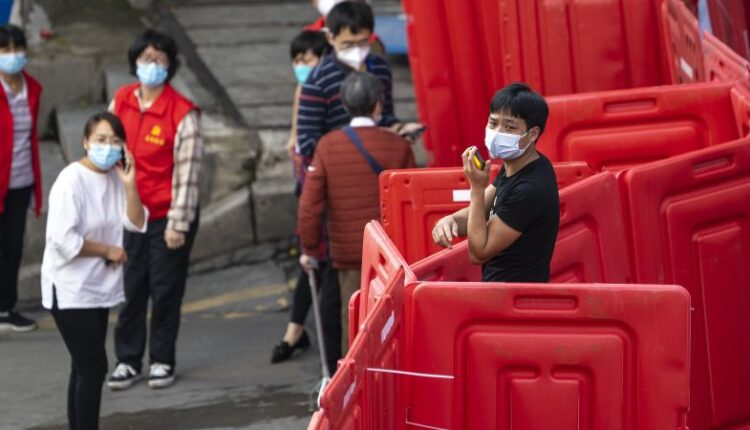 In many countries, cursing online about the government is so commonplace nobody bats an eye. But it’s not such an easy task on China’s heavily censored internet.

That doesn’t appear to have stopped residents of Guangzhou from venting their frustration after their city – a global manufacturing powerhouse home to 19 million people – became the epicenter of a nationwide Covid outbreak, prompting lockdown measures yet again.

“We had to lock down in April, and then again in November,” one resident posted on Weibo, China’s restricted version of Twitter, on Monday – before peppering the post with profanities that included references to officials’ mothers. “The government hasn’t provided subsidies – do you think my rent doesn’t cost money?”

Other users left posts with directions that loosely translate to “go to hell,” while some accused authorities of “spouting nonsense” – albeit in less polite phrasing.

Such colorful posts are remarkable not only because they represent growing public frustration at China’s unrelenting zero-Covid policy – which uses snap lockdowns, mass testing, extensive contact-tracing and quarantines to stamp out infections as soon as they emerge – but because they remain visible at all.

Normally such harsh criticisms of government policies would be swiftly removed by the government’s army of censors, yet these posts have remained untouched for days. And that is, most likely, because they are written in language few censors will fully understand.

These posts are in Cantonese, which originated in Guangzhou’s surrounding province of Guangdong and is spoken by tens of millions of people across Southern China. It can be difficult to decipher by speakers of Mandarin – China’s official language and the one favored by the government – especially in its written form.

And this appears to be just the latest example of how Chinese people are turning to Cantonese – an irreverent tongue that offers rich possibilities for satire – to express discontent toward their government without attracting the notice of the all-seeing censors.

In nearby Cantonese-speaking Hong Kong, anti-government demonstrators in 2019 often used Cantonese wordplay both for protest slogans and to guard against potential surveillance by mainland Chinese authorities.

Now, Cantonese appears to be offering those fed-up with China’s strict zero-Covid policies an avenue for more subtle displays of dissent.

Jean-François Dupré, an assistant professor of political science at Université TÉLUQ who has studied the language politics of Hong Kong, said the Chinese government’s shrinking tolerance for public criticism has pushed its critics to “innovate” in their communication.

“It does seem that using non-Mandarin forms of communication could enable dissenters to evade online censorship, at least for some time,” Dupré said.

“This phenomenon testifies to the regime’s lack of confidence and increasing paranoia, and of citizens’ continuing eagerness to resist despite the risks and hurdles.”

Though Cantonese shares much of its vocabulary and writing system with Mandarin, many of its slang terms, expletives and everyday phrases have no Mandarin equivalent. Its written form also sometimes relies on rarely used and archaic characters, or ones that mean something totally different in Mandarin, so Cantonese sentences can be difficult for Mandarin readers to understand.

Compared to Mandarin, Cantonese is highly colloquial, often informal, and lends itself easily to wordplay – making it well-suited for inventing and slinging barbs.

When Hong Kong was rocked by anti-government protests in 2019 – fueled in part by fears Beijing was encroaching on the city’s autonomy, freedoms and culture – these attributes of Cantonese came into sharp focus.

“Cantonese was, of course, an important conveyor of political grievances during the 2019 protests,” Dupré said, adding that the language gave “a strong local flavor to the protests.”

He pointed to how entirely new written characters were born spontaneously from the pro-democracy movement – including one that combined the characters for “freedom” with a popular profanity.

Other plays on written characters illustrate the endless creativity of Cantonese, such as a stylized version of “Hong Kong” that, when read sideways, becomes “add oil” – a rallying cry in the protests.

Protesters also found ways to protect their communications, wary that online chat groups – where they organized rallies and railed against the authorities – were being monitored by mainland agents.

For example, because spoken Cantonese sounds different to spoken Mandarin, some people experimented with romanizing Cantonese – spelling out the sounds using the English alphabet – thereby making it virtually impossible to understand for a non-native speaker.

And, while the protests died down after the Chinese government imposed a sweeping national security law in 2020, Cantonese continues to offer the city’s residents an avenue for expressing their unique local identity – something people have long feared losing as the city is drawn further under Beijing’s grip.

For some, using Cantonese to criticize the government seems particularly fitting given the central government has aggressively pushed for Mandarin to be used nationwide in education and daily life – for instance, in television broadcasts and other media – often at the expense of regional languages and dialects.

It’s not just Cantonese affected – many ethnic minorities have voiced alarm that the decline of their native languages could spell an end to cultures and ways of life they say are already under threat.

In 2020, students and parents in Inner Mongolia staged mass school boycotts over a new policy that replaced the Mongolian language with Mandarin in elementary and middle schools.

Similar fears have long existed in Hong Kong – and grew in the 2010s as more Mandarin-speaking mainlanders began living and working in the city.

“Growing numbers of Mandarin-speaking schoolchildren have been enrolled in Hong Kong schools and been seen commuting between Shenzhen and Hong Kong on a daily basis,” Dupré said. “Through these encounters, the language shift that has been operating in Guangdong became quite visible to Hong Kong people.”

He added that these concerns were heightened by local government policies that emphasized the role of Mandarin, and referred to Cantonese as a “dialect” – infuriating some Hong Kongers who saw the term as a snub and argued it should be referred to as a “language” instead.

In the past decade, schools across Hong Kong have been encouraged by the government to switch to using Mandarin in Chinese lessons, while others have switched to teaching simplified characters – the written form preferred in the mainland – instead of the traditional characters used in Hong Kong.

There was further outrage in 2019 when the city’s education chief suggested that continued use of Cantonese over Mandarin in the city’s schools could mean Hong Kong would lose its competitive edge in the future.

“Given Hong Kong’s rapid economic and political integration, it wouldn’t be surprising to see Hong Kong’s language regime be brought in line with that of the mainland, especially where Mandarin promotion is concerned,” Dupré said.

It’s not the first time people in the mainland have found ways around the censors. Many use emojis to represent taboo phrases, English abbreviations that represent Mandarin phrases, and images like cartoons and digitally altered photos, which are harder for censors to monitor.

But these methods, by their very nature, have their limits. In contrast, for the fed-up residents of Guangzhou, Cantonese offers an endless linguistic landscape with which to lambast their leaders.

It’s not clear whether these more subversive uses of Cantonese will encourage greater solidarity between its speakers in Southern China – or whether it could encourage the central government to further clamp down on the use of local dialects, Dupré said.

For now though, many Weibo users have embraced the rare opportunity to voice frustration with China’s zero-Covid policy, which has battered the country’s economy, isolated it from the rest of the world, and disrupted people’s daily lives with the constant threat of lockdowns and unemployment.

“I hope everyone can maintain their anger,” wrote one Weibo user, noting how most of the posts relating to the Guangzhou lockdowns were in Cantonese.

“Learn Cantonese well, and go across Weibo without fear.”

Portugal: Why this southern European country is a hot place to move