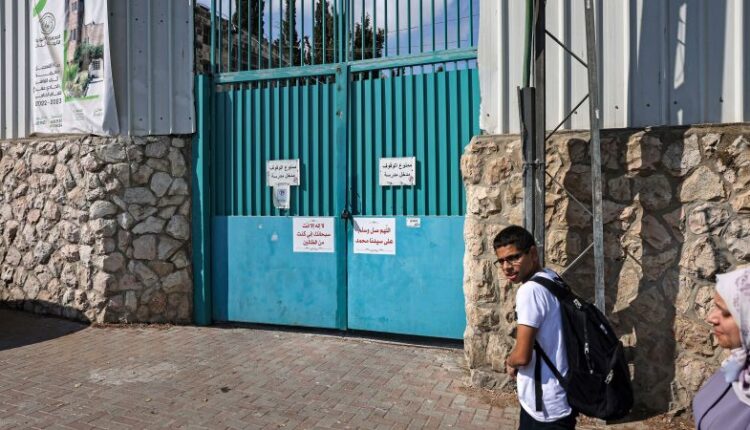 On September 19, some 150 schools in East Jerusalem went on strike, keeping tens of thousands of students out of the classroom, to protest the introduction of Israeli textbooks.

The strike in East Jerusalem – an area populated mostly by Palestinians – is the latest flashpoint in a long-running aspect of the Israeli-Palestinian conflict: what and how children who live in Jerusalem should learn about the conflict in their textbooks.

Palestinian parents and activists say Israel is trying to erase their identity by pushing an Israeli narrative. Israeli authorities and activists allege many Palestinian textbooks incite hatred towards Jews and glorify violence.

Yoav Zamran, head of education for the Jerusalem municipality, told KAN News last week that there had been a thirty-fold increase in the number of Palestinian students using the Israeli curriculum from five years ago. “We started with 500 children and today there are over 15,000,” he said. The Faisal Al Husseini Foundation, a Palestinian charity, says there are more than 98,000 Palestinian students in East Jerusalem.

In July, the Israeli Ministry of Education suspended the licenses of six East Jerusalem schools, and told them they had one year to amend their curriculum or have their licenses revoked entirely because they insisted on using textbooks produced by the Palestinian Authority instead of those approved by Israeli officials in Jerusalem and the Israeli Ministry of Education. Yifat Sasha Biton, Israel’s minister of education, said at the time that the textbooks contained incitement against Israel and its soldiers and spread “hate speech against the State of Israel and its symbols.”

The Israeli textbooks the government wants the schools to use are based on the Palestinian Authority’s textbooks, but with certain pages or entire chapters either edited or completely changed by Israeli authorities. That’s where the issue lies, according to the parents, who say depictions of the Palestinian flag are erased, and that entire sections about Palestinian identity are altered or removed entirely.

In one example provided by parents, a lesson in a Palestinian math textbook shows the separation wall between the West Bank and Israel and discusses documenting “violations of the occupation in order to present it to the International Criminal Court.” Much of the wall cuts through the West Bank proper, and the Palestinian lesson asks students to complete a table that counts the number of “Palestinian communities isolated by the annexation wall.” The Israeli version instead replaces it with an assignment on completing a table related to population distribution.

In another example provided by parents, on a page of a third-grade Palestinian textbook that the Israeli version omits, a situation is presented where a Palestinian father is arrested by Israeli forces in the family home overnight, which made a child “worried and tired.” The mother tells the child not to worry because “your father became a prisoner like thousands of Palestinian prisoners” who “are struggling and resisting the Zionist occupation.”

Students are taught to remember Palestinian prisoners are all “in occupation prisons because of their resistance.”

Israeli authorities say such lessons glorify prisoners, including those who commit violent acts. But Fadwa Al Husseini, president of the Faisal Al Husseini Foundation, which aims to protect Palestinian culture in East Jerusalem, says this particular lesson “talks about an incident and does not call for it to be copied in any way.”

The Palestinian Prisoners Club says there are more than 4,600 Palestinians in Israeli prisons, with some 743 in “administrative detention” – where they are held without trial or charge. The figure doesn’t include those arrested for routine criminal offences. Israel says administrative detention is necessary to get dangerous people off the streets before they can commit a crime, without sharing sensitive intelligence on the reason for their arrest. Human rights groups argue such detention, which can last for months, denies the prisoners basic human rights under international law.

Israel took control of East Jerusalem from Jordan in the 1967 war. It is considered occupied territory by most countries and international bodies – a characterization rejected by Israel, which claims all of Jerusalem as is its undivided capital. Israel formally annexed the eastern sector of the city in 1980. Palestinians living there were subsequently given the right to Israeli citizenship, but most have rejected it and now hold Israeli-issued residency documents.

The Palestinian Authority wants the eastern sector as the capital of its future state and has regularly accused Israel of trying to displace Palestinians in favor of Jews by forced eviction in neighborhoods such as Sheikh Jarrah and Silwan, where Jewish settlers have clashed with Palestinian residents. Israel denies the accusations and says the eviction cases are private real estate disputes.

The subject of Palestinian textbooks has long been a political issue within the broader Israeli-Palestinian conflict.

In June, the European Union, which helps fund schools in the West Bank, East Jerusalem and Gaza, issued a report on the subject which found that Palestinian textbooks show “antagonism towards Israel,” don’t depict Israel as a country on maps in certain lessons, and in some cases praise Palestinians who have carried out attacks that have killed Israelis, including civilians, although the report added that the textbooks broadly adhered to UNESCO standards.

In a tweet on the day of the strike earlier this month, Biton said “Schools in East Jerusalem whose teaching materials portrayed IDF soldiers as murderers, praised terrorists and encouraged terrorism, were required to correct the materials, otherwise their license would be revoked. We will not allow budgeted schools to promote incitement, hatred and terrorism.”

But the same EU report also found that Israeli textbooks made for East Jerusalem schools idealize “coexistence of Israelis and Palestinians … with no mention of existing tensions,” delete “depictions of violence by Palestinians or Israelis” and remove entire chapters on Palestinian history from Palestinian Authority textbooks, which “fundamentally changes the national narrative.”

Palestinian parents say that Israel is an occupying power in East Jerusalem and has no place dictating the curriculum in their schools in the first place.

“How can I accept teaching my child that there is no [separation] wall when she sees it every day? Or accept teaching her that settlers in the West Bank are good neighbors of the Palestinians and that they both help each other farm the land? This is simply a lie and changing the reality on the ground,” said Gina Asfour, a parent. “It’s an education resistance, the last thing we can do to save our identity and our roots and pass them to our children.”

For now, parents at the six schools whose licenses were revoked have bought their own textbooks and distributed them. The rest are not using any textbooks, working instead off worksheets.

“We, the parents of the East Jerusalem children, the future generation that will hold the flag or resistance and defend this city, we refuse to ruin the identity of Jerusalem children and Israelize it,” said Ahmad Safadi, another parent. “We will never accept to have anyone make them forget that they are Palestinians, Arabs, Muslims and Christians holding our Palestinian flags.”

As protests continued across Iran, President Ebrahim Raisi on Wednesday said that he welcomes criticism of authorities in the handling of the case of Mahsa Amini, but that he condemns violent protests. “We must identify the line between disruption and protest, we must not allow any violation of life and property of people,” Raisi said in an interview aired on Iran’s state-run IRIB television.

Protests have been ongoing for nearly two weeks following the death of Mahsa Amini after she was taken to a “re-education center” in Tehran by morality police for not wearing her hijab properly.

Saudi Arabia to invest $37.8 billion to make the kingdom a gaming hub

Lebanon’s parliament fails to elect a new head of state

Lebanon’s parliament on Thursday failed to elect a replacement to President Michel Aoun, whose term ends on October 31, Reuters reported.

Thousands of mourners filled the streets of the West Bank village of Tekoa, south of Bethlehem, on Friday to mourn a seven-year-old boy who died on Thursday under disputed circumstances. The Palestinian Ministry of Health said the boy died of “a heart condition, after he fell from a height.” His father Yasser Suleiman told reporters that his son was being chased by Israeli soldiers and that he “died of fear.”

A gecko that is causing a nuisance in Israel has gripped Egyptian social media.

In an overwhelming show of support for a 75-gram reptile, Egyptians are tweeting about the gecko’s “invasion” of Israel, with some saying they are proud of its ability to cause panic in the country.

Last week, Israeli news site Ynetnews reported that a species of the reptile known as the Egyptian gecko had “invaded” the country, citing Israel’s Nature and Parks Authority, which was reportedly seeking assistance in locating it.

The gecko was first identified in Israel around a decade ago in the Ein Gedi nature reserve, which is not near the Egyptian border, leading to speculation the species was brought in by a tourist from Egypt.

This type of reptile “can eat anything it is able to overcome,” said Ynetnews, citing Tel Aviv University professor Shai Meiri.

When it was studied and named in 2014, it was believed to have wiped out all other local geckos in the area, with the potential to “cause severe damage” to ecosystems, added the news site, citing Meiri.

There was no mention of where that particular gecko had come from, but Egyptians used the lizard’s association with their country as an opportunity to congratulate themselves for the headache it has caused in Israel. MBC Misr, a popular TV channel, even dedicated a segment from a talk show to the story.

The hashtag #EgyptianGecko was trending on Twitter in the country, with many accompanying their posts with memes mocking perceived Israeli panic or clips from famous Egyptian films. “History will stand witness that the Egyptian gecko proved more useful than the Egyptian army,” a user tweeted. “The Egyptian gecko is causing commotion in Israel, long live the Egyptian gecko,” tweeted another.

Egypt and Israel fought four wars before signing a peace treaty in 1979.