Injured by war, the scars on Ukraine’s wounded children are more than skin deep 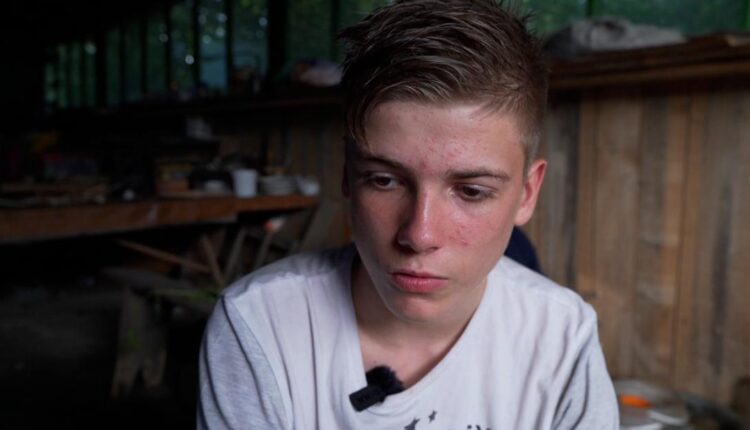 Russian troops set up a military camp in the small farming community of Yahidne, northeast of the capital Kyiv, on March 3, on their advance toward the capital. Serhii and his family were taken captive with hundreds of others in the basement of his school. Ten days later, as he stood in line for food in the playground, there was an explosion and he was struck by shrapnel.

“First, there was a strong blow to the back. I fell, couldn’t get up, couldn’t move,” he told CNN on Thursday, showing the spot behind his school where he was hit. “People ran over and lifted me up. I couldn’t even walk. There was a lot of blood.”

The next day, the teenager was taken by Russian troops in a helicopter across the border to Belarus for treatment alongside their wounded soldiers. Photos of his injuries, shared with CNN, show a deep laceration to his shoulder. A medical report from the Gomel Regional Children’s Clinical Hospital, where he was treated, said he suffered an open fracture of the shoulder blade, fractured ribs and a deep bruising of his right lung.

Over the next month, Serhii had no contact with his family and underwent major surgery twice. His mother, Svitlana Sorokopud, said Russians troops in Yahidne took all the residents’ cell phones and, cut off from the outside world, she had no way to find out where her son had gone.

“It cannot be described in words when you don’t know where your child is,” she said. “I cried day and night. He had such a serious injury, and I did not know where he was.”

It wasn’t just physical injuries that beset her son, but the agony of being separated from his family, she said. “In the beginning, he couldn’t even sleep there, and he had nightmares. He was worried that we would not pick him up.”

Serhii made contact with his parents only after the Russians started their retreat on March 30, and his family was able to buy a new cell phone and access the internet again. They say that a Belarusian doctor had posted Serhii’s name, date of birth and hometown on social media. “Parents, perhaps, [are] in Yahidne,” the post read. “Please spread the word so they know the boy is alive.”

When they found out where he was, Svitlana said they spoke on the phone every day for around a month, assuring him they were coming. His 25-year-old sister crossed the border to Poland and then to Belarus at the beginning of May to get him.

Now, in Yahidne, there are burned-out homes on every street. Outside the house where Serhii and his family now live, his 9-year-old brother and young nephew pretend to operate a checkpoint. The specter of a new Russian offensive in northern Ukraine is never far from their minds. “There is no fear now,” Serhii said. “But sometimes I wonder what will happen if they come back, and what they will do.”

As the war stretches into its sixth month, the impact on Ukraine’s children is evident in the grim tally of young lives cut short. On a new Ukrainian government webpage, “Children of War,” the toll ticks up against the backdrop of a black screen: 361 dead and 703 wounded at the last count.

Yet the impact is not just physical, but psychological, Daria Gerasimchuk, the Ukrainian president’s commissioner for children’s rights, said.

“Absolutely every Ukrainian child is affected … Every child has heard air raid warnings. Children see the suffering of their relatives and friends. Children are forced to say goodbye to parents who go to defend the country on the front line. There are those who are still under occupation. Those who are injured. In other words, absolutely every Ukrainian child has got quite serious psychological and physical injuries,” Gerasimchuk said in an interview with CNN last week.

Most Ukrainian children have fled the front lines and nearly two-thirds have been displaced, either inside the country or across borders as refugees, according to UNICEF in June. That same month, Ukrainian President Volodymyr Zelensky said: “Russia is stealing the childhood of our children, it wants to destroy our future.”
Human Rights Watch has said that Russia’s invasion “instantly suspended the education of 5.7 million children between the ages of 3 and 17, many of whom had already missed out on months of education due to deadly attacks on schools in eastern Ukraine, or Covid-19 school closures.” Many schools in Ukraine have resumed classes, according to the World Bank, but these take place almost entirely online.
While something resembling normal life returns to the streets of Kyiv, Jenya Nikitina — a bashful 7-year-old — knows this uneasy calm can be shattered in an instant. She was asleep when multiple Russian missiles hit the capital’s western district of Shevchenkivskyi on the morning of June 26, striking her family’s apartment block. Her father, Oleksii, was killed. Jenya and her mother, Katerina Volkova, a 35-year-old Russian citizen, were trapped for hours.

Her mother remembers the moment she heard Jenya call out, confirming she was still alive. “There was no happiness [at] this moment I was able to hear her,” she told CNN, sitting beside her daughter outside a school gymnasium in Chokolivka district in Kyiv ahead of Jenya’s Saturday morning gymnastics class. “It was even more awful because I was thinking [that] she was also in pain … I was telling her, ‘Someone will come.’ Was I believing in this? That is another question.”

Jenya, who was trapped for a few hours, had a concussion and multiple abrasions. Her mother, trapped for five hours, sustained burns, deep cuts and a fracture.

Weeks later, it’s her daughter’s psychological scars that worry Katerina the most. Asked if it’s possible for a child to understand what has happened, her voice breaks. “I’m not sure we adults emotionally understand what is happening.”

In case the sirens start again, Jenya’s gymnastics classes are the only time they are separated. Leaping and bounding on the mat is a chance to heal and, for a brief time, forget.

Katerina is worried that fear is now too familiar for her daughter. “It [her childhood] was taken … in the future there will be joyful moments and lots of parents are trying, still, to make these moments for them,” she said, adding that children have experienced “too much.”

Katerina added that she “couldn’t have imagined” that her daughter would grow up in an environment where she could identify the sounds of sirens, rockets and gunfire. “It’s not what you expect your child will learn at the age of seven.”

“The most horrifying thing is that [children] think it’s normal already. They talk about it like it’s their daily life.”