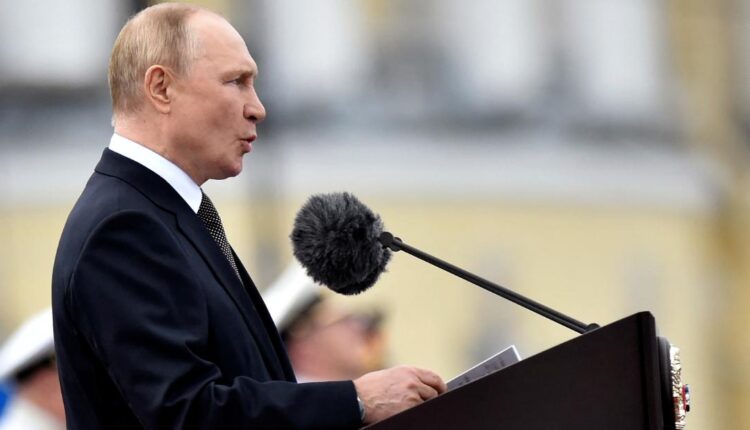 Mykolaiv Mayor Oleksandr Senkevych said cluster munitions were blowing out windows and destroying balconies. “Mykolaiv was under mass shelling today. Probably the strongest one of all time,” he said in a statement.

A CNN team on the ground heard the explosions caused by the strikes and saw fires that broke out in the shelling. Residents interviewed by CNN also said it was the heaviest shelling in the city since the start of the war.

At least one person was killed and two injured in the attack, according to Vitalii Kim, head of Mykolaiv regional military administration.

In a speech commemorating Russia’s Navy Day in Saint Petersburg, Putin did not make any mention of Russia’s war in Ukraine, but said his country’s “current situation is demanding very decisive actions.”

“We will provide protection firmly and by all means. The key here is the capabilities of the Navy, which is able to respond with lightning speed to anyone who decides to encroach on our sovereignty and freedom,” Putin said.

Putin said delivery of the country’s Zircon hypersonic cruise missile systems would begin in the coming months. Russia said in May that it successfully tested the Zircon missile over a distance of 1,000 kilometers (621 miles).

Separately, at least three people were killed and eight injured in fighting in eastern Ukraine, according to the Donetsk military-civilian administration, which said villages in the region were targeted by artillery, Russian Grad missiles and Uragan rockets.

“11 private residential buildings and a high-rise building, a police station, a market, a canteen were damaged, and three fields were burned,” the administration said.

The Ukraine General Staff said Russian forces were attacking the front lines in the Donetsk and Luhansk regions.

Ukrainian President Volodymyr Zelensky on Saturday called on the remaining residents of the Donetsk region to urgently evacuate in what he called a “government decision.”

“Everything is being organized. Full support, full assistance — both logistical and payments,” he said in his nightly address. “We only need a decision from the people themselves, who have not yet made it for themselves.”

A strike on a prison in separatist-held eastern Ukraine on Friday resulted in the deaths of at least 40 prisoners. The Olenivka prison near Donetsk has been used to house many of the Ukrainian soldiers who surrendered at the Azovstal plant in Mariupol several months ago.

Zelensky said the attack was “a deliberate war crime by the Russians.”

Ukrainian intelligence said the strikes were carried out by the Russia mercenary group Wagner and were not coordinated with the Russian Ministry of Defense. CNN cannot independently verify the accusations made by Ukrainian military intelligence.

Russia has blamed Ukraine for the attack.