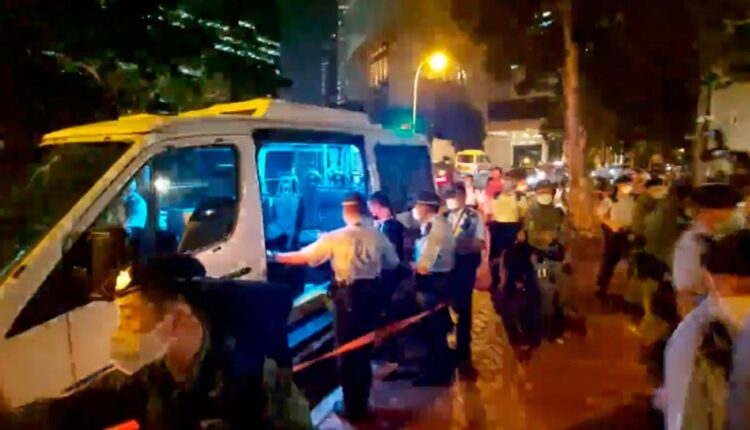 Videos posted to social media show hundreds of people gathering outside the city’s British consulate on Monday night to pay tribute to the Queen, as her funeral took place in London — an event heavy with political significance in the former British colony, where mourning the monarch has become a subtle form of protest.

Many live-streamed the funeral procession on their phones, while others held up candles and laid flowers at a memorial site.

One video shows a man playing on his harmonica the tune “Glory to Hong Kong,” a protest anthem created during the depths of the pro-democracy, anti-government protests that rocked the city in 2019.
The rousing ballad, which includes such lyrics as “For Hong Kong, may freedom reign,” became an anthem of the pro-democracy movement and performances of it have been viewed millions of times on YouTube.

At the vigil on Tuesday, crowds waved iPhone flashlights in the dark and sang along to the harmonica, some starting a chant that has also become synonymous with the protests: “Hong Kong, add oil.”

Photos then show police officers arriving and escorting the man into their van.

When CNN asked police about the harmonica player, they responded saying a 43-year-old man surnamed Pang had been arrested that night at around 9:30 p.m. He was suspected of committing acts of sedition, and was detained for questioning — then released on bail pending investigation, police said.

He will be required to report back to police in late November.

Hong Kong’s sedition law is part of a 1938 Crimes Ordinance, once used by the colonial government to target pro-China groups and publications — especially after the Chinese Communist Party came to power, and during anti-government protests in 1967.

It originally defined sedition as speech that brought “hatred or contempt” against the Queen, her heirs, or the Hong Kong government.

The law had remained unused for decades until it was revived in 2020 — alongside Beijing’s introduction of a sweeping national security law, which targets secession, subversion, collusion with foreign forces and terrorist activities.

A conviction under the sedition law carries a maximum two-year sentence.

The revival of the law — and its use amid a broader crackdown by Hong Kong and Beijing authorities — has drawn criticism from activists and humanitarian organizations around the world.

In July, the UN’s Human Rights Committee urged Hong Kong to repeal the sedition law, saying it was concerned it could limit citizens’ “legitimate right to freedom of speech.”

The Hong Kong government has repeatedly denied that the sedition law or national security law — which has been used to arrest activists, journalists, protesters and former elected lawmakers — pose any risk to people’s freedoms.

The sedition law “is not meant to silence expression of any opinion that is only genuine criticism against the government based on objective facts,” it said in response to the UN, adding that the national security law “has swiftly and effectively restored stability and security” after the 2019 protests.

The crackdown has seen the steady erosion of civil liberties in what was once a free-wheeling city with an independent press and rich protest culture.

Most pro-democracy groups have disbanded, their leaders either imprisoned or forced into exile, and mass demonstrations are all but banned.

Without traditional avenues of protest — people have now been arrested for social media posts and even for publishing children’s books deemed seditious — the Queen’s death emerged this month as an unexpected opportunity for dissent.

In celebrating the monarchy and its symbols, some Hong Kongers see an opportunity for a veiled dig at both the Chinese Communist Party, which has made no secret of its eagerness for Hong Kongers to forget the era, and local authorities who recently introduced school books that claim the city was never even a colony to begin with.

A retiree named Wing, who spoke to CNN outside the consulate on Monday but declined to give his full name, said it was “incredible” to be part of a mass gathering again.

“I feel angry that the Hong Kong government is not showing any respect properly (to the Queen). They’re scared of the Chinese government telling them off, but we were part of the colony,” said Wing, who was born in the 1960s.

The displays of affection are also a reminder of the city’s pro-democracy protests, during which demonstrators adopted the colonial flag as a sign of resistance to Chinese one-party rule.

However, other critics have pointed out that even under British rule, Hong Kongers did not have universal suffrage. And many felt London neglected its duty by failing to grant British citizenship to Hong Kongers at the time of the handover, instead offering most a limited passport that did not give them the right to live and work in Britain.

Since the introduction of the national security law, Britain has created what it calls a path to citizenship via a new type of visa.