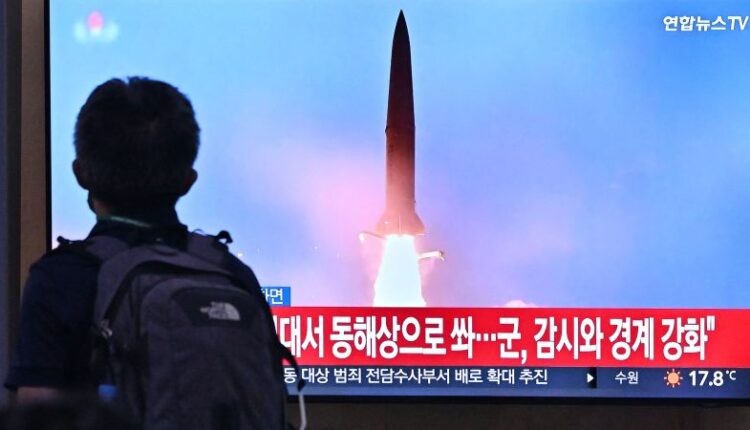 United States, South Korean and Japanese warships performed a missile defense exercise in the Sea of Japan on Thursday, two days after North Korean sent a ballistic missile over Japan, the US-Indo Pacific Command said in a statement.

The two US warships, the guided-missile cruiser USS Chancellorsville and the guided-missile destroyer USS Benfold, both part of the USS Ronald Reagan aircraft carrier strike group, participated in the exercise along with two Japanese and one South Korean destroyer, the US statement said.

Thursday’s exercise also came just hours after North Korea fired two short-range ballistic missiles, the latest in a spate of missile launches by Pyongyang in the past two weeks.

“This exercise enhances the interoperability of our collective forces and demonstrates the strength of the trilateral relationship with our Japan and Republic of Korea (ROK) allies, which is forward-leaning, reflective of our shared values, and resolute against those who challenge regional stability,” the US Pacific Command statement said.

South Korea’s National Security Council (NSC) held an emergency meeting on Thursday after the short-range ballistic missiles launches, the sixth such launch in 12 days, the country’s Presidential Office said in a statement.

The NSC warned that North Korea’s provocation will face a stronger response following Pyongyang’s launch on Tuesday of the intermediate-range ballistic missile (IRBM) that flew over Japan.

South Korea’s Joint Chiefs of Staff also said on Wednesday that the US carrier strike group would be redeployed to the waterway, in what it characterized as a “very unusual” move meant “to demonstrate the resolute will of the SK-US alliance to respond decisively to any provocation or threat from North Korea.”

Asked about the South Korean statement on the Reagan’s movements, a US 7th Fleet spokesperson told CNN, “The Ronald Reagan Carrier Strike Group is currently operating in the Sea of Japan.”

The South Korean statement on the US Navy strike group’s movements drew a harsh response from Pyongyang.

“The DPRK is watching the US posing a serious threat to the stability of the situation on the Korean peninsula and in its vicinity by redeploying the carrier task force in the waters off the Korean peninsula,” read a statement from the North Korean Foreign Ministry posted on the state-run Korean Central News Agency.

Later Thursday, a formation of 12 North Korean warplanes – eight fighters and four bombers – flew south of the special surveillance line in what appeared to be an air-to-surface firing exercise, according to South Korea’s JCS.

The special surveillance line is a virtual line set by the South Korean military; it is not considered South Korean airspace.

Pyongyang’s missile launches Thursday are the 24th such tests this year, including both ballistic and cruise missiles – the highest annual tally since Kim Jong Un took power in 2012.

It closely followed the highly provocative launch by the isolated country on Tuesday, when North Korea fired a ballistic missile without warning over Japan – the first in five years – prompting Tokyo to urge residents in the north to take shelter.

The United States and South Korea responded with missile launches and exercises around the Korean Peninsula on Tuesday and Wednesday.

Speaking Wednesday during a trip to South America, US Secretary of State Antony Blinken warned that if North Korea continues “down this road” of provocation, “it will only increase the condemnation, increase the isolation and increase the steps that are taken in response to their actions.”

Last month, the US, Japanese and South Korean navies conducted joint anti-submarine exercises in international waters off the east coast of the Korean Peninsula to improve response capability against North Korean submarine threats.

The Reagan carrier strike group and destroyers from South Korea and Japan were involved in that joint exercise, according to the South Korean Navy.

Explained: How much damage can North Korea’s weapons do?

Speaking at the council, US Ambassador to the United Nations Linda Thomas-Greenfield accused Russia and China, without naming them, of enabling North Korea.

North Korea has “enjoyed blanket protection from two members of this council. These two members have gone out of their way to justify the DPRK’s repeated provocations and block every attempt to update the sanctions regime,” she said.

But China countered that it was Washington ratcheting up tensions.

“The US has recently been bolstering its military alliances in the Asia Pacific region and intensifying the risk of military confrontation on the nuclear issue,” Chinese Deputy Ambassador to the UN Geng Shuang said during the Security Council meeting.

The US is “poisoning the regional security environment,” he added.

“It is obvious that missile launches by Pyongyang were a response to the short-sighted confrontational military activities of the US,” said Anna Evstigneeva, Russia’s deputy permanent representative to the UN.

Andrei Lankov, professor at Kookmin University in Seoul, said military displays from the US and its allies have no effect on the North Korean weapons program.

“Yes, American strategic assets are deployed, but does it make any difference?” Lankov asked.

“It doesn’t make any difference where an American aircraft carrier is … They’re just testing their missiles,” he said of the North Koreans.

Experts have warned that North Korea’s recent tests suggest an even greater escalation in weapons testing could be on the horizon.

“North Korea is going to keep conducting missile tests until the current round of modernization is done,” Jeffrey Lewis, director of the East Asia Nonproliferation Program at the Center for Nonproliferation Studies, told CNN earlier this week.

Carl Schuster, a former director of operations at the US Pacific Command’s Joint Intelligence Center in Hawaii, said North Korean leader Kim has both domestic and regional audiences in mind with the testing.

Kim is telling his own people, “We can deal with whatever the threat the West, the US and South Korea can come up with,” Schuster said.

“He’s also telling the South Koreans that if they go too far, he can rain destruction on them. He’s also signaling to Japan, ‘I can reach you and I’m not afraid to do so.’”

Schuster also said that Kim can be expected to up the ante soon by testing a nuclear weapon.

South Korean and US officials have been warning since May that North Korea may be preparing for a nuclear test, with satellite imagery showing activity at its underground nuclear test site.

If North Korea conducts a test, it would be the country’s seventh underground nuclear test and the first in nearly five years.