Odesa: How one Russian missile changed the lives of two men forever 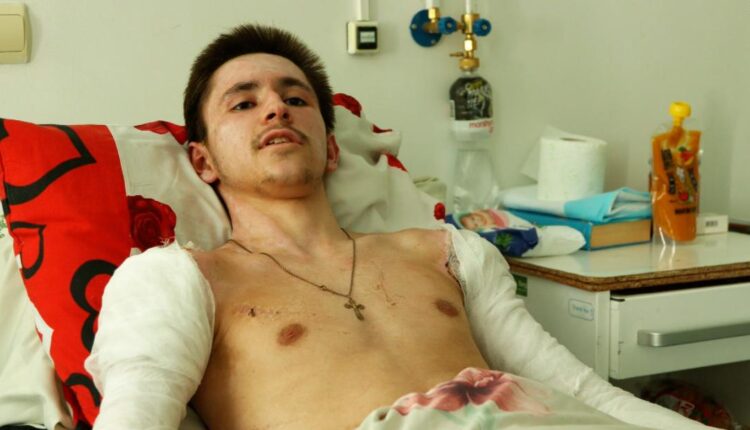 “I started to burn, turn into ashes,” he told CNN from his hospital bed in the south of Ukraine.

“I thought another minute and I will definitely turn into ashes. I felt everything. There was no fire — there were red-hot concrete that surrounded me,” he continued.

Paradovsky said he had just gotten out of the shower and that may have saved him because being in the bathroom meant he had another wall between him and the missile.

The explosion blasted through several floors of his high-rise apartment building in Odesa, leaving a huge gaping hole.

In one second, he knew he was hurt. And in the next, the survival instinct kicked in and drove him to look for a way to escape, he remembered.

He said he pushed his way through hot slabs of concrete to the front of his building where the facade no longer existed. He rinsed his hands, nose and throat with water from a burst pipe and managed to find his way down to the street where there were emergency responders.

“I didn’t feel any pain. I was on adrenaline,” Paradovsky said.

The pain soon came though. Paradovsky said he has been told he suffered first and second-degree burns across 20% of his body, along with a bunch of open wounds from flying shrapnel.

Before the attack, he had planned to work on merchant ships. But that is now on hold.

Of his plans for the future, he said simply, “In the next year, my main mission is to recover.”

While Paradovsky felt the instinct to try to survive, Yuriy Glodan is wondering what he has to live for.

The missile that maimed Paradovsky killed Glodan’s wife, his mother-in-law and his three-month-old daughter.

“My family is my whole life, really. I lived for their sake,” he told CNN.

“When the baby came along, I understood a meaning to life. As soon as I’d wake up in the morning, I realized for whom I was going to work every day. Every action, every act was motivated by my family. Now it’s really hard.”

Glodan was heading back from the grocery store with food and Easter treats for the Orthodox Christian holiday when he heard the attack that destroyed his family.

“I heard an explosion. I felt it in my heart immediately that something happened. I tried to call my wife immediately. Her mobile network was already knocked out,” he said.

Emergency services converged on the ruined building but Glodan said he believed he could save his family, and another person there offered to join him.

“We crossed over the police cordon, and made it up to the fourth floor, where my apartment was,” he said.

“When I got there, it was hard to figure out what I was looking at, a room … water had poured out everywhere. There was fire, smoke, torn pieces of metal all around. All the appliances looked like crumpled aluminum foil.”

EMS rescuers joined them and they were able to find the body of Glodan’s mother-in-law, and then his wife, Valeria, a veterinarian.

Then there was an alert that the building might collapse and they were ordered to leave, said Glodan.

EMS workers were able to remove the two adult bodies from the ruins but there was no sign of his baby girl.

“I was constantly shouting, ‘There is still a child up there! Did you find the child or not?'” he recalled.

And then his fears were confirmed. Under more rubble, a searcher had found the remains of his baby, killed along with her mother and grandmother.

Glodan went back to the rubble the next day. He found his daughter’s stroller in what was left of the hallway, a place the family had thought would be safe.

Glodan said his wife and her mother had tried to live life to the fullest. In addition to working with animals, Valeria was a talented writer and photographer, he said.

And his tiny daughter Kira had made an impact, too, even in her too-short life, inspiring her grandmother, he added.

“Once our daughter was born … she was inspired to live life anew,” he said.

“My only feeling is that this is hate, evil,” he said.

“I only feel anger inside towards the ones who did it,” he said. “Anger and a lot of fear.”

30 of the best fried foods around the world