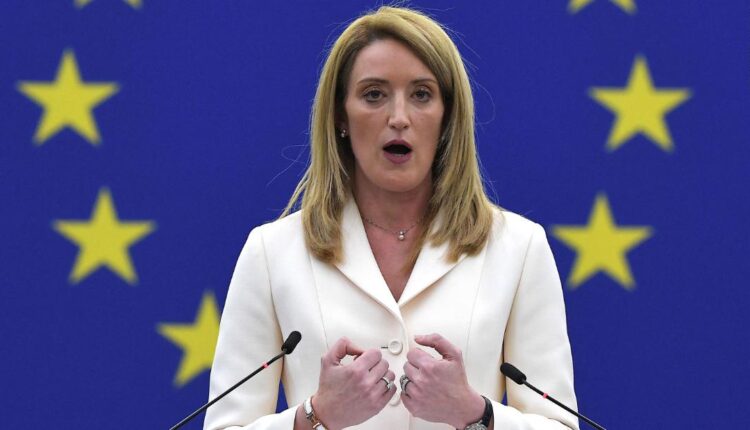 Metsola, who was voted into the post on her 43rd birthday, had served as the Parliament’s vice-president since 2020 and was elected comfortably in Tuesday’s leadership vote, winning the support of 458 of the group’s 705 MEPs.

She is the third woman to lead the Parliament, but has drawn early criticism over her opposition to abortion — a procedure that is legal, if restricted, in every EU country except her own nation of Malta. Reproductive rights have become a central issue on the continent since Poland introduced a near-total ban on terminations last year.
Although the role of President is largely ceremonial, Metsola takes charge of the bloc at a critical time. She will seek to contain fractures among the group’s MEPs, while it also deals with the Russian military buildup near to the Ukrainian border, a complicated trade relationship with China and emerging from the Covid-19 pandemic.

“I will stand against anybody who wants to destroy the European project,” Metsola said at the first news conference following her victory, as she also batted back repeated questions over her position on abortion.

While she has advocated for LGBT rights as part of the center-right EPP group — the largest political party in the European Parliament — her track record of voting against abortion legislation has drawn criticism from progressive members.
In 2015, she said in a joint statement that she and two other Maltese MEPs “remain categorically against abortion” and called the procedure a “red line.” The lawmakers voted down a non-legislative report on gender equality due to an amendment which said women should have “ready access to abortion.”
More recently, in June 2021, Metsola was among a minority of lawmakers who voted to strike down another non-legislative report calling for universal access to safe and legal abortion across the EU. On Tuesday she said this move had “specific Maltese” context.

Her election on Tuesday drew anger from some on the Parliament’s left, with the Federation of Young European Greens writing on Twitter: “This is not progress.”

But Metsola told reporters that she will commit to promoting the “unambiguous” position of the parliament, which has repeatedly voted in the past to support abortion rights. Last year, the body passed a resolution demanding the right to safe abortion — widely seen as a response to restrictive laws in Poland and Malta.

Metsola is the first woman to hold the presidency in two decades, following seven men. The previous leader, Sassoli, died aged 65 last week following a serious complication due to a dysfunction of his immune system.

“Your hard work & determination are an inspiration to us all. We’ll work closely together for the EU’s recovery and a green, digital & bright European future,” EU Commission President Ursula von der Leyen tweeted after Metsola’s victory.

“The European Parliament is the beating heart of our European democracy. Looking forward to cooperating with you, dear Roberta,” he said.