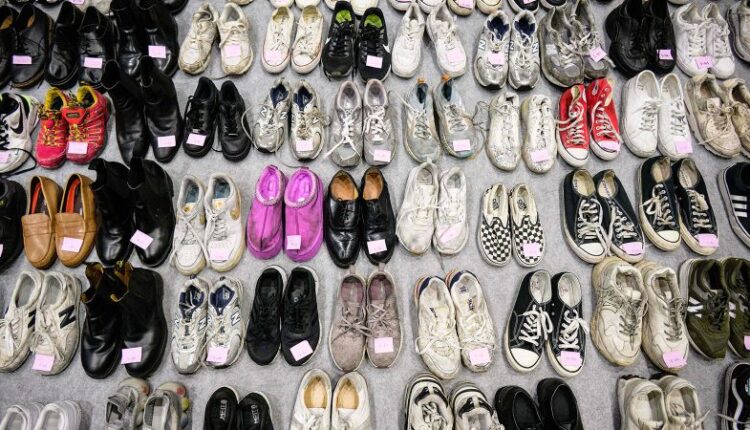 ln a cavernous Seoul gymnasium Tuesday, grieving families inspected neat rows of belongings left behind at the scene of the deadly street crush in Itaewon.

Shoes, bags, glasses, notebooks, wallets, cardholders and colorful hats were laid out on makeshift tables and exercise mats along the polished floor – waiting to be claimed by the next of kin of 156 victims killed in Saturday night’s crowd surge.

“Found it. I think this is the one,” said one woman, as she recognized a black coat, hugging it as she cried.

The middle-aged woman, who had arrived with her husband, collapsed to the floor in tears after discovering a missing pair of knee-high boots. It was among rows of black boots, stilettos and sneakers. In many cases, there was just one shoe.

Another younger woman, wearing a cast on her left arm, walked into the gymnasium to find her lost shoe. This woman, who didn’t want to be named, said she was in front of a bar in the alley when the crush happened.

Stuck in the crowd, she said she passed out from asphyxiation “to the point I thought I was dead, but a foreigner shouted at me to wake up.” Her arm was badly bruised during the incident, and after she came to, the woman said she just held on until the crowd eased and she could be rescued.

Family members walked into the gymnasium, one by one and in small groups, escorted by officials who hurriedly put on white gloves and showed them to the tables, so they could inspect and claim the carefully arranged possessions.

South Korea is in deep mourning for the 156 people killed, including 26 foreigners, in the crowd crush on Saturday night when as many as 100,000 people crammed into the narrow streets of Itaewon to celebrate Halloween.

Officials expected large numbers due to the popularity of the area for Halloween parties in pre-Covid years, but police have admitted they were unprepared for this year’s crowd.

Speaking to the media on Tuesday, Yoon Hee-keun, head of National Police Agency, bowed deeply as he began a press conference, admitting for the first time failings on the behalf of the police in the capital that night.

Yoon said officers failed to adequately respond to the emergency calls that flooded into the police call center before the disaster.

“The calls were about emergencies telling the danger and urgency of the situation that large crowds had gathered before the accident occurred,” Yoon said. “However, we think the police response to the 112 (emergency telephone number) calls was inadequate.”

South Korean police received at least 11 calls from people in Itaewon about concerns of a possible crush as early as four hours before the incident occurred on Saturday night, records given to CNN by the National Police Agency show.

The first call was made at 6:34 p.m. Saturday from a location near the Hamilton Hotel, which borders the alley where the deadly surge occurred, the records show.

“People are going up and down the alley now, but it looks really dangerous. People can’t come down but people keep coming up (the alleyway), so I fear people might be crushed,” one caller said, according to the record.

“I managed to get out, but it’s too crowded. I think you need to control this. Nobody is controlling (the crowd). I think police officers should be standing here and moving some people so that others can go through the alleyway. People cannot even go through but there are more people pouring down,” the caller added.

Then at 8:09 p.m., another person in Itaewon reported that there were so many people in the area that they were falling over and getting hurt. The caller asked for traffic control, the record shows.

On Monday, Oh Seung-jin, director of the agency’s violent crime investigation division, said about 137 personnel had been deployed to Itaewon that night, compared to about 30 to 90 personnel in previous years before the pandemic.

“For this time’s Halloween festival, because it was expected that many people would gather in Itaewon, I understand that it was prepared by putting in more police force than other years,” said Oh.

However, police at the scene were tasked with cracking down on illegal activity such as drug taking and sexual abuse in the area “rather than on site control,” Oh said.

On Tuesday, South Korea’s Prime Minister Han Duck-soo said a “lack of institutional knowledge and consideration for crowd management” was partly to blame for the crowd crush.

“One of the reasons was a lack of deep institutional knowledge and consideration for crowd management. However, the police are investigating,” Han said.

“Even if more police were put in (to the site), there seems to have been a limit in the situation as we don’t have a crowd management system, but we’ll need to wait for the police investigation to find out the cause,” he added.

CNN reporter returns to Itaewon’s narrow alley one day after the Halloween disaster. See what’s it like

“In addition to side streets where this time’s large disaster happened, (we) need to establish safety measures at stadiums, performance venues and etc. where crowds gather,” he said, adding that the government will hold a national safety system inspection meeting with relevant ministers and experts soon.