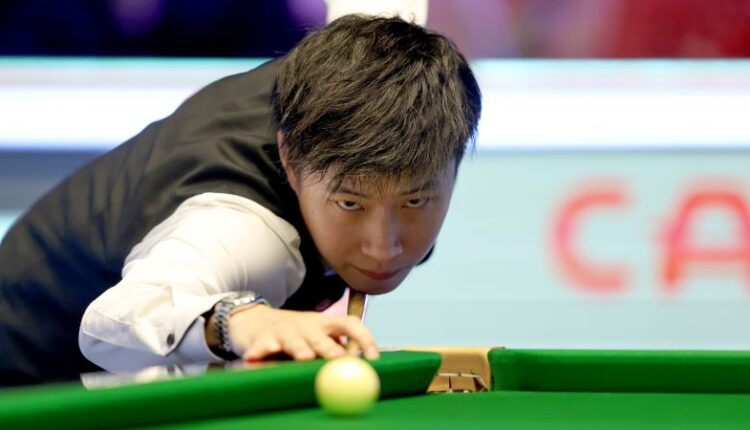 Snooker’s governing body on Tuesday said it had suspended two more Chinese players as it investigates an alleged match-fixing and betting scandal – bringing the number of players from the Asian country caught up in the probe to 10.

In a statement, the World Professional Billiards and Snooker Association (WPBSA) said former UK Championship winner Zhao Xintong, 25, and his compatriot Zhang Jiankang, 24, were barred from attending or competing on the World Snooker Tour with immediate effect.

“This decision is part of an ongoing investigation into allegations of manipulating the outcome of matches for betting purposes in breach of the WPBSA Conduct Regulations,” the statement said.

“The suspension will remain in place until the conclusion of the investigation or any subsequent charges that may or may not be brought. Both Zhao and Zhang have the right to appeal this decision.”

World No. 9 Zhao is widely considered one of snooker’s brightest talents. He will now miss the Masters in London on Sunday, one of the sport’s biggest annual tournaments.

CNN has reached out to both players for comment.

Former world No. 11 Liang Wenbo was the first player from China suspended in connection with the investigation in October. A further seven Chinese players, including 2021 Masters champion Yan Bingtao were suspended in December.

CNN has reached out to both Liang and Yan for comment. Neither Liang or Yan have publicly commented on the ongoing investigation.

The specific details regarding the allegations related to the individual suspended players remains unknown. The source of the original allegations also remains unclear.

“The WPBSA can confirm that the wider investigation is now at an advanced stage, and it is anticipated will be completed shortly at which point any potential charges will be considered,” the WPBSA statement added.

In a statement Tuesday, the Chinese Billiards and Snooker Association said it “firmly opposes game manipulation, gambling and other acts that violate sports integrity and ethics, and will make further punishments based on the final investigation results released by the WPBSA.”

Snooker, which shares many similarities with he US game of pool, is a two-person sport played on a large, green table using cues.

The objective is to take turns to hit the white cue ball to pot one of 15 red balls each worth 1 point, before sinking one of 6 different colored balls – worth between 2 and 7 points – into the 6 pockets around the table.

The player who scores the most points wins an individual frame, with the overall winner reaching a certain amount of frames.

Traditionally the sport has been dominated by players from the UK and US, but in recent years has seen an influx of Chinese talent, with the sport soaring in popularity in the East Asian country.

The Last Of Us Multiplayer Game Gets New Concept Art, More Details Later This Year