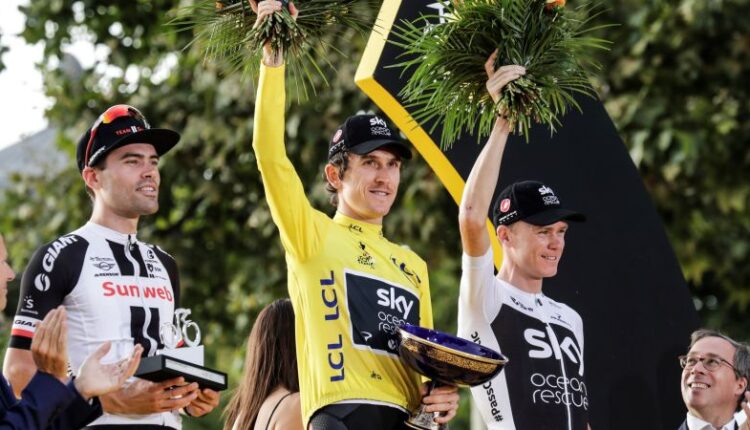 Here’s a look at the Tour de France.

The Tour de France is a prestigious multistage bike race that takes place annually in France and sometimes the surrounding countries.

Lance Armstrong held the record for most Tour de France wins (seven), but he was stripped of those wins in 2012.

France has won more times than any other country (36).

The winner of the race is the person with the overall shortest accumulated time.

Ten, six and four second bonuses are awarded to the top three riders at the end of road stages, excluding the individual and team time trials.

There are two rest days.

YELLOW – “maillot jaune” – Overall leader of the race. The yellow jersey was introduced into the race in 1919, most likely because the race’s sponsor was a French newspaper (formerly L’Auto, now L’Equipe) that printed on distinctive yellow paper.

POLKA DOT – “maillot à pois rouge” – Worn by the cyclist with the best accumulated time in the mountain segments.

GREEN – “maillot vert” – Worn by the points classification leader. Points are awarded for intermediate and final sprints on flat terrain.

1903 – Maurice Garin of France is the first cyclist to win the race.

1910 – First time the race goes through the Pyrenees.

September 20, 2007 – Landis, winner of the 2006 Tour de France, is stripped of his title when an arbitration panel rules in favor of the US Anti-Doping Agency (USADA). Landis, the first Tour de France winner stripped of the title, initially maintained his innocence but later admitted to doping and accused others, including Armstrong, of doing the same.

October 22, 2012 – The International Cycling Union announces that Armstrong is being stripped of his Tour de France titles and is being banned from professional cycling for life.

October 26, 2012 – The International Cycling Union announces that no one will be declared the winner of the Tour de France from 1999-2005, after Armstrong is stripped of his titles.

October 10, 2018 – Britain’s Team Sky reports that the 2018 trophy won by Thomas has been stolen from a display in Birmingham, England, where the team had been displaying all three trophies won by its riders.

April 15, 2020 – It is announced that the Tour de France is being postponed until August due the coronavirus outbreak. It was initially scheduled to take place June 27-July 19, 2020.