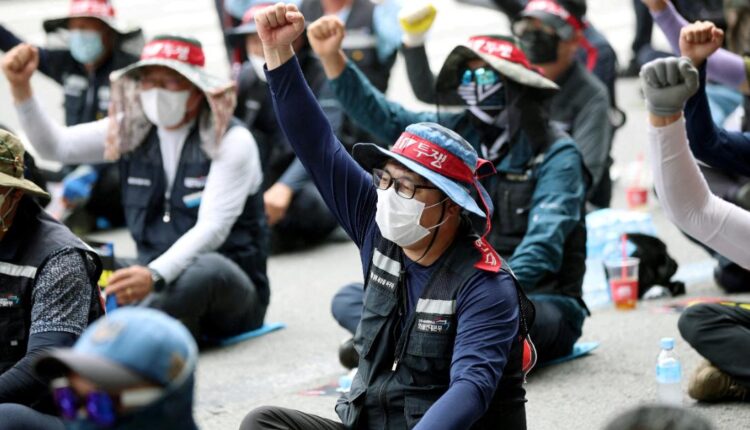 The industry association representing 32 petrochemical companies in South Korea said the average daily ex-factory shipments of their member companies had plunged by 90% due to the strike, now in its seventh day.

“The Cargo Truckers Solidarity union’s collective action to reject transportation is spreading the damage to major petrochemical complexes in Ulsan, Yeosu and Daesan,” the Korea Petrochemical Industry Association said in a statement.

The 22,000-strong union is protesting against soaring fuel prices and demanding minimum pay guarantees. Four rounds of negotiations with the government have failed to find a compromise.

It was not confirmed whether companies have already cut operations, but a source at a major petrochemical company told Reuters most firms were still storing finished products with the hope of resuming transportation.

Automakers, hit hard as they were not able to receive a timely supply of components and transport finished products, also formed a task-force team within their trade association to monitor the situation and call for an early resolution.

Steelmaker POSCO has said it would halt some plants due to a lack of space to store unshipped products. Automaker Hyundai Motor has cut production at some lines and cement makers have also cut operations.

Prolonged labor strife could test President Yoon Suk-yeol, a political novice who took office five weeks ago, potentially distracting from his conservative agenda and raising the risk of long-term antagonism with powerful unions.

The government has urged the truckers to return to work but said it would seek to reflect their demands in the legislative process and keep trying to end the strife through dialog.

The truckers demand an extension of subsidies, set to expire this year, that guarantee minimum wages as fuel prices rise. The government says it is up to parliament to change the legislation.

As the global economy struggles with supply bottlenecks, any prolonged slowdown in the production and shipments of chips, petrochemicals and autos could add to concerns of rising inflation and slowing growth.

South Korea’s inflation is set to hit a 24-year high of 4.8% this year, the Organisation for Economic Cooperation and Development said last week, while cutting its growth forecast to 2.7% from a December projection of 3.0%.