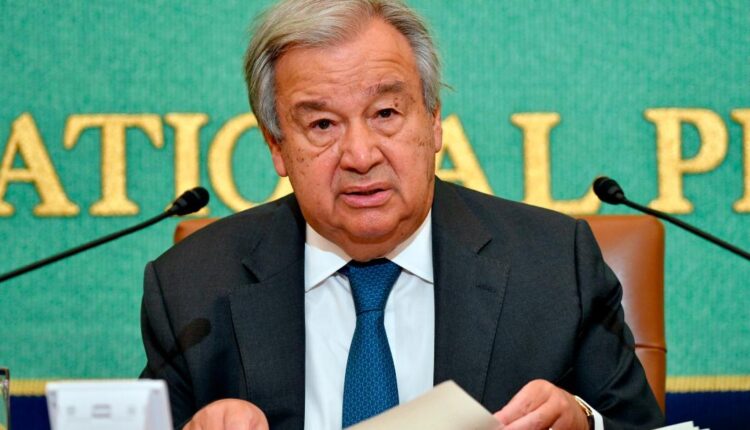 “Any attack on nuclear power plants is a suicidal thing,” Guterres told reporters Monday in Tokyo. “I hope that these attacks will end,” he said, and called on the International Atomic Energy Agency (IAEA) to be given access to the plant.

The Zaporizhzhia plant occupies an extensive site on the Dnipro river. It has continued operating at reduced capacity since Russian forces captured it early in March, with Ukrainian technicians remaining at work.

On Sunday, Ukraine’s state energy company Energoatom said that one worker had been injured by Russian shelling around the facility on Saturday.

Energoatom claimed that three radiation monitoring sensors were also damaged, saying “timely detection and response in case of aggravation of the radiation situation or leakage of radiation from spent nuclear fuel casks are currently impossible.”

“This time a nuclear catastrophe was miraculously avoided, but miracles cannot last forever,” the company added.

Speaking on Ukrainian television, Energoatom’s chairman Petro Kotin said one strike Sunday was up to 20 meters away from the processed fuel storage area.

“If they had hit the containers with the processed fuel, it would be a radiation accident,” he said.

Kotin suggested that if one container was hit “it will be a local accident on the territory of the plant and nearby territory. If it’s two (or) three containers — the affected area will increase.”

Kotin also said that during the shelling, communication lines between the nuclear plant, the hydroelectric power plant and the Ukrainian energy system had been ruptured.

“As of now Zaporizhzhia NPP (nuclear power plant) is only connected to the Ukrainian energy system with just one communication line. If all the lines are damaged, the plant will transfer to the so-called ‘black-out’ mode, meaning become completely de-energized. And this situation will be very dangerous for keeping fuel in nuclear reactors in a safe condition,” he said.

It was the second time in as many days that the plant was hit. Ukraine and Russia have traded blame for both attacks.

The Russian-backed authorities in the nearest city — Enerhodar — claimed that a Ukrainian missile landed within 400 meters of one of the plant’s reactors. The city was seized by Russian forces at the same time as the power plant.

Zakharova also claimed Ukrainian armed forces were making the situation around the site more dangerous by the day.

CNN cannot verify claims made by either side. The Russians have been shelling the Ukrainian-held town of Nikopol from positions around the plant.

Fears about the security of Zaporizhzhia nuclear plant have been growing since Russian forces seized the site, but reached an inflection point on Friday when shelling damaged a high-voltage power line and forced one of the plant’s reactors to stop operating — despite no radioactive leak being detected.

After the attack, Energoatom said that Russian shellfire had damaged a nitrogen-oxygen station and the combined auxiliary building, and that there were “still risks of hydrogen leakage and sputtering of radioactive substances, and the fire hazard is also high.”

On Saturday, the director general of the IAEA, Rafael Mariano Grossi, said he was extremely concerned by the shelling “which underlines the very real risk of a nuclear disaster that could threaten public health and the environment in Ukraine and beyond.”

Ukrainian President Volodymyr Zelensky, who has accused Russia of using Zaporizhzhia nuclear power plant to wreak terror in Europe, said Sunday that he spoke with European Council President Charles Michel about the situation at the complex.

The IAEA has been trying to coordinate a mission of safeguarding experts to visit the plant since it was seized by Russian forces. Yevhenii Tsymbaliuk, Ukraine’s ambassador to the IAEA in Vienna, warned of catastrophic consequences if anything were to happen to the plant during a Monday press conference, saying it would not be “comparable even to Chernobyl or to Fukushima.”

Tsymbaliuk said Ukraine would like to see a delegation of experts from the International Atomic Energy Agency and the United Nations visit the station to monitor its status but that Russia’s military actions in Ukraine are making such a trip “impossible.”

Russia later said it was ready to assist the IAEA with a visit to the power plant, RIA Novosti reported.

Russian representative Mikhail Ulyanov said Monday that a diplomatic note to coordinate a trip to the site had been sent out last week, the state news agency reported.

As Russia and Ukraine blame each other for recent rocket and missile attacks close to the Zaporizhzhia nuclear power plant, Energoatom’s chairman Kotin said that Russian forces must be expelled from the plant and a demilitarized zone should be created on the territory of the plant.

He also repeated Ukrainian claims that Russia had moved weapons into the plant’s power units.

“There are 14 units of heavy military equipment in the first power unit. There are 6 vehicles in the second engine room and we don’t know what is inside those vehicles. There’s heavy weaponry as well,” he said.

He also claimed that Russian troops had occupied all the shelters at the power plant, and workers had nowhere to go when shelling occurred.

Several Western and Ukrainian officials believe that Russia is now using the giant nuclear facility as a stronghold to shield their troops and mount attacks, because they assume Kyiv will not return fire and risk a crisis.

US Secretary of State Antony Blinken has accused Moscow of using the plant to shield its forces, while Britain’s ministry of defense said in a recent security assessment that Russia’s actions at the complex sabotage the safety of its operations.

Ukraine’s foreign ministry warned on Friday that further attacks on the plant could be disastrous.

“The possible consequences of hitting an operating reactor are equivalent to the use of an atomic bomb,” the ministry said on Twitter.