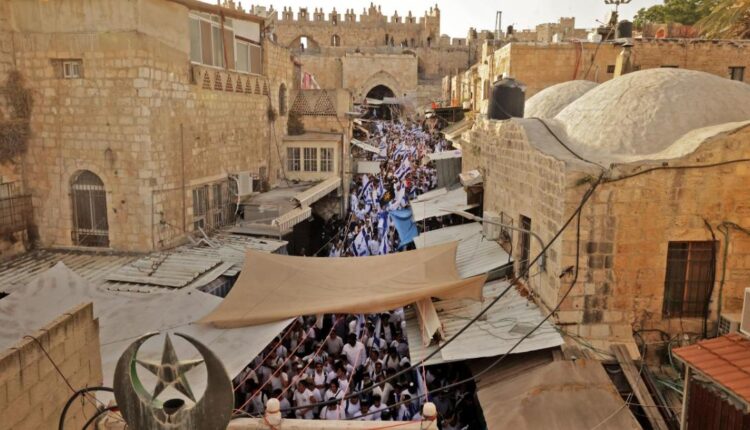 Crowds waving Israeli flags set off from Damascus Gate — the main entry to the Muslim Quarter of Jerusalem’s Old City — dancing and chanting “the nation of Israel lives” and “death to Arabs.”

Seventy-nine Palestinians were injured in Jerusalem by rubber bullets, sound grenades and pepper spray, he Palestinian Red Crescent Society said, and one protester was shot with live fire.

Twenty-eight people were evacuated to the hospital following clashes with Israeli security forces and Israeli marchers, according to the agency.

At least 163 Palestinians were also injured in the West Bank. At least 11 of those injuries were caused by live bullets, according to the Red Crescent.

More than 50 people have been arrested and detained for involvement in incidents of riots and assaulting police officers, Israel’s police said in a statement Sunday.

Five police officers were lightly injured in the various incidents and needed medical treatment, the police also said. Over 2,000 police officers and volunteers had been deployed throughout Jerusalem.

The flag march is an annual parade where mostly nationalist Jewish groups celebrate Israel gaining control of the Western Wall during the 1967 Six-Day War and capturing East Jerusalem, placing the entire city under Israeli control.

The march has also been a flashpoint with Palestinian residents of the Old City in previous years.

Reporting contributed by CNN’s Atika Shubert, Abeer Salman and Lauren Izso in Jerusalem and by Celine Alkhaldi in Amman.

No word from Ukraine’s missing Azovstal defenders, say some families