Why Arabs aren’t laughing at George W. Bush’s gaffe on Ukraine and Iraq 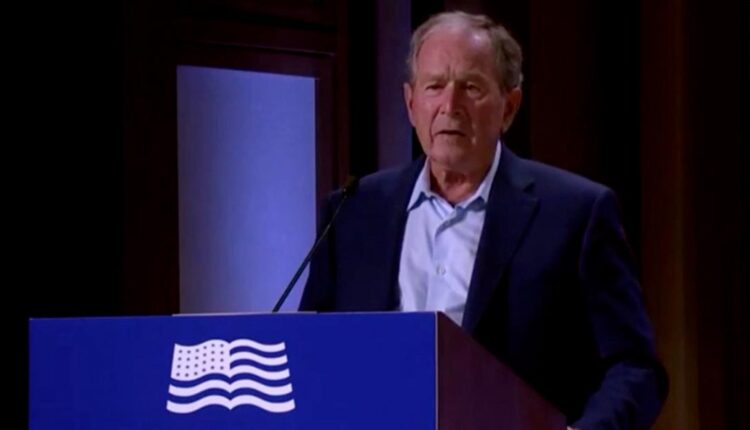 Speaking from the lectern at the Southern Methodist University in Texas on Wednesday, Bush railed against Russian President Vladimir Putin’s autocratic rule and the impunity that enabled “the decision of one man to launch a wholly unjustified and brutal invasion of Iraq.”

“– I mean, of Ukraine,” he quickly corrected himself as the audience erupted in laughter. “I’m 75,” he added, blaming, in jest, his age for the slip of the tongue.

The video made the rounds on social media, but it did not elicit laughs from everyone. Instead, many quipped darkly that the blunder was the closest Iraqis would get to Bush admitting to launching the bloody 2003 invasion of Iraq under a false pretext.

“If you were George W. Bush, you think you’d just steer clear of giving any speech about one man launching a wholly unjustified and brutal invasion,” said former Rep. Justin Amash who is of Arab-American descent.

As in Ukraine, the war in Iraq was launched for reasons that have been condemned as illusory. The Bush administration, citing faulty intelligence, insisted that then-President Saddam Hussein possessed weapons of mass destruction (WMD), which were never found. One of the stated objectives of Russia’s war was to de-Nazify Ukraine, which is led by a democratically elected Jew.

As in Ukraine, the war in Iraq wreaked death and destruction across the country.

But unlike Ukraine, where Putin’s brutal invasion was met with Western outrage and skepticism of Russia’s narrative, the Western mainstream media had few scruples about reproducing the Bush administration’s WMD allegations about Iraq, paving the way for that country’s invasion.
A brutal dictator was removed from power in Iraq in a war that critics said was more about oil than WMD. The Arab world continues to suffer the consequences of that botched war to this day, and the grievances are alive and well.

Many in the region have watched the scenes of war from Ukraine in horror, while also openly questioning the US’s moral compass.

There were some instances of whataboutism among Arabs — where sympathy for the plight of Arabs under occupation was presented as mutually exclusive to solidarity with Ukraine, which some criticized as unwarranted.

There were also questions about the vast disparity in moral outrage between the two wars. To add insult to injury, the US has not yet issued an apology to Iraqis, and almost two decades after the invasion, some — at least those in Bush’s audience on Wednesday — are still laughing about it.

“While (Bush) was talking about Russia and its president, he made what must be one of the biggest Freudian slips of all time,” said MSNBC’s Mehdi Hassan. “I’m not laughing. And I’m guessing nor are the families of the thousands of American troops and the hundreds of thousands of Iraqis who died in that war.”

US President Joe Biden and Saudi Arabia’s de facto ruler Crown Prince Mohammed bin Salman could meet as soon as next month, multiple sources told CNN. A meeting would come after months of diplomacy and represent a turnabout for a US president who once declared Saudi Arabia a “pariah.”

Iran-backed Hezbollah leader Hassan Nasrallah on Wednesday acknowledged that his party and its allies lost their parliamentary majority in Sunday’s election, but also said that no single group had taken it.

Israeli lawmaker Ghaida Rinawie Zoabi on Thursday highlighted recent clashes between Palestinians and Israeli forces in Jerusalem, as well as the killing of Al Jazeera journalist Shireen Abu Akleh, as reasons for her resignation from Prime Minister Naftali Bennett’s coalition.

A small stone found in the Egyptian desert 25 years ago is changing what we know about how the universe was created.

The stone, named Hypatia after the Alexandrian philosopher, was found in southwestern Egypt in 1996, but it continues to puzzle scientists to this day. Researchers from the University of Johannesburg believe the stone is the first tangible evidence we have of a rare type of supernova.

They’ve published their findings in a study published in the journal Icarus.
A supernova is the biggest explosion known to humans. It can occur by one star exploding as it runs out of fuel, or by a collision between stars. According to Nasa, about two or three supernovas occur each century.

In 2013, researchers from the university discovered that the stone was not from Earth, evident from the concentration of elements within it. In 2015 they determined it was not part of any known type of meteorite or comet. Then, in 2018, nickel phosphide, an element that has never been found in any object in our solar system, was found in the stone.

Fast forward to 2022, and scientists have determined that not only is the stone from beyond our solar system, but that it holds traces of an “Ia,” a rare type of supernova that is one of the most energetic events in the universe. This occurs once or twice per galaxy per century and manufactures most of the iron in our universe.

It is unlikely that this is the last discovery to be made on the heels of Hypatia, and it is a reminder of what late American astronomer Carl Sagan once said: “The earth is a very small stage in a vast cosmic arena.”

The royal court shared a letter written by the king, in which he said he made the decision after coming to a “disappointing conclusion” that his half-brother Hamzah “will not change,” a year after the former crown prince was accused of plotting to destabilize the country.

Queen Noor, the stepmother of Jordan’s king, has advocated for her son’s cause from the United States, where she spends most of her time.

Own A Physical Compilation Of 30 Indie Games With Super Rare’s Mixtape Vol. 3

How golfers embraced fitness training and ‘learned to love’ the gym