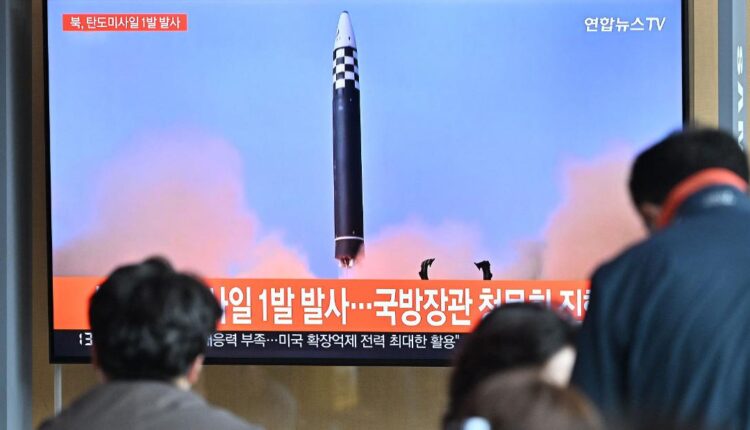 “There are clear indications that the reductions that have characterized global nuclear arsenals since the end of the cold war have ended,” the Stockholm International Peace Research Institute (SIPRI) said in a report Monday.

The report comes amid growing Western concerns over efforts by both China and North Korea to expand their nuclear capabilities. The US suspects North Korea is preparing to conduct its seventh nuclear test imminently, while China’s Defense Minister Wei Fenghe told the Shangri-La Dialogue summit at the weekend that his country had made “impressive progress” in developing new nuclear weapons.

However, while SIPRI reports that China is “in the middle of a substantial expansion of its nuclear weapon arsenal,” it makes clear that China and North Korea are not the only culprits.

On SIPRI estimates, the United States and Russia remain by far the world’s largest nuclear powers, with 3,708 and 4,477 nukes respectively, while China has 350, France 290 and Britain 180. But China’s warhead count has increased in recent years, up from 145 warheads in 2006 according to the institute. The Pentagon predicts the Chinese stockpile to “at least double in size” over the next decade.

While the stockpiles of both the US and Russia declined in 2021, SIPRI believes an “alarming” longer-term trend will see both countries increase their stockpiles and develop more powerful weapons.

North Korea’s secrecy means it is hard to gauge its nuclear abilities. Some estimates put its current stockpile at around 20 nuclear warheads, though the US and other countries believe it is working to increase this number and its ability to deliver them.

“North Korea continues to prioritize its military nuclear program as a central element of its national security strategy,” SIPRI said, adding that “the country’s inventory of fissile material is believed to have grown in 2021.”

The think tank, which included figures for the country in its annual report for the first time this year, said it believed North Korea now had enough fissile material to produce up to 55 warheads.

SIPRI also said India and Pakistan were making efforts to expand their nuclear arsenals. It said Israel — which does not publicly acknowledge possessing nuclear weapons — was trying modernize its arsenal. Stockpile estimates for India and Pakistan stood at 160 and 165, and for Israel, 90.

As recently as January, the world’s five biggest nuclear powers — also known as the P5, as permanent members of the United Nations Security Council — pledged to work together toward “a world without nuclear weapons” in a rare statement of unity.

However, Russia’s subsequent invasion of Ukraine has raised concerns that nuclear weapons could be used outside a testing situation for the first time since the US bombed Hiroshima and Nagasaki in 1945.

Since the start of the war Russia has repeatedly reminded the world of its nuclear strength in oblique references apparently aimed at dissuading Western countries from greater intervention. CIA director William Burns has also warned Russia may use tactical nuclear weapons in Ukraine.

Now many nations — even those without nuclear arms — are rethinking their calculations. Japan, the US and South Korea have recently vowed to strengthen their shared nuclear deterrence strategy.

“The world has become even more uncertain,” Kishi told Asia’s premier defense summit. “Japan is surrounded by actors that possess, or are developing, nuclear weapons, and that openly ignore rules.”

He criticized neighboring North Korea’s missile tests and called China “a nation of concern”, citing recent military operations it had held with Russia in waters close to Japan and Taiwan — their first since Russia’s invasion of Ukraine.

“Ukraine (today) may be East Asia tomorrow,” he said.

Speaking at the same summit, South Korean Defense Minister Lee Jong-sup said his country would “dramatically strengthen” its defensive capabilities amid heightened concerns over Pyongyang’s nuclear weapons program.
Various experts have pointed out that Russia’s invasion of Ukraine has demonstrated the power of nuclear deterrence. Ukraine is one of the few countries ever to have voluntarily given up a nuclear arsenal. It did so after the fall of the Soviet Union, sending many of its weapons to Russia — the same country that it is now being invaded by.

“Countries that feel under threat may look at Ukraine and figure that getting rid of [their] nuclear weapons is not the way to go and that might diminish the incentive for them to move towards nuclear free deal which will become an uphill task,” said regional security expert Ian Chong, also an associate professor of political science at the National University of Singapore.

Chong said that there had been “a high level of concern about nuclear weapons” at the Shangri-La. “We are seeing a ratcheting up of tensions that is very reflective of the concerns in northeast Asia [at the moment] in the event of any nuclear attack.”

“Several additional nuclear warheads are thought to have been assigned to operational forces in 2021 following the delivery of new mobile launchers and a submarine,” SIPRI wrote.

“China has always pursued an appropriate path to developing nuclear capabilities for protection of our country,” he said in response to questions about the new nuclear missile silos. Wei said that nuclear weapons would be used “in self defense” and to prevent a nuclear war.

“We developed nuclear capabilities to protect the hard work of the Chinese people and protect our people from the scourge of nuclear warfare,” he said.

Wei’s comments came after remarks from US Defense Secretary Lloyd Austin, who told the same conference that China was engaged in coercive, aggressive and dangerous actions that threatened to “undermine security, stability and prosperity in the Indo-Pacific.”