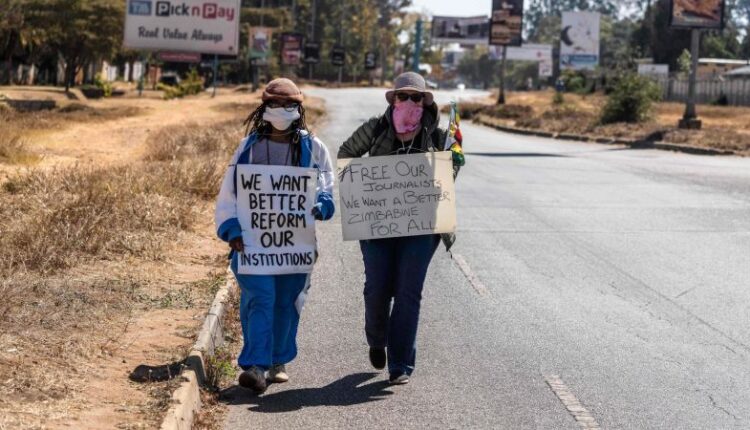 Award-winning Zimbabwean author Tsitsi Dangarembga has been found guilty of staging a protest with the intent of inciting public violence, a court in the capital Harare ruled Thursday.

Dangarembga, a fierce critic of President Emmerson Mnangagwa’s government was arrested in 2020 for marching while holding a placard demanding reforms.

She was charged with her friend and colleague Julie Barnes who joined her on the protest.

Inside the Harare courtroom, Dangarembga and Barnes held hands as magistrate Barbara Mateko handed down her judgment.

“Considering the sequence of events, images tendered in court, evidence by journalists …the two intended to incite violence and the accused are found guilty as charged.”

A defiant Dangarembga told journalists after the verdict, “This means the space for freedom of expression is shrinking and is increasingly criminalized. However, we do intend to appeal the conviction.”

Dangarembga, 63, has been a leading voice in condemning gross corruption and human rights abuses in Zimbabwe.

Her book “This Mournable Body” was nominated for a Booker Prize in 2020.

The ruling has drawn widespread condemnation, with the Booker Prize committee saying it was “shocked” to hear about the conviction,” in a Twitter post.

PEN International, an association of writers, which awarded Dangarembga a Pinter Prize in 2021, also condemned the sentence in a statement.

“The conviction today of award-winning writer, filmmaker, and activist Tsitsi Dangarembga and her co-accused, Julie Barnes, by a Zimbabwe Court is a travesty of justice. PEN International is shocked by this news and strongly condemns the systematic misuse of the rule of law by the Zimbabwean authorities to harass, intimidate, and punish Dangarembga and Barnes, simply because they exercised their legitimate right to freedom of expression,” the statement read.

Journalist Hopewell Chin’ono, who has also been an outspoken critic of the ruling Zanu-PF party, said the conviction “is one of the biggest blunders ever made by (President) Mnangagwa’s repressive regime, they might not care, but they will regret it.”

The Zimbabwe Lawyers for Human Rights weighed in saying it was saddened by the conviction.

CNN has contacted the Zimbabwean government for a comment.

Four teenagers were shot at a protest in Papua. Eight years on, only one man is facing trial