Boris Johnson has done huge damage to his reputation. His colleagues fear he will now cost them their jobs 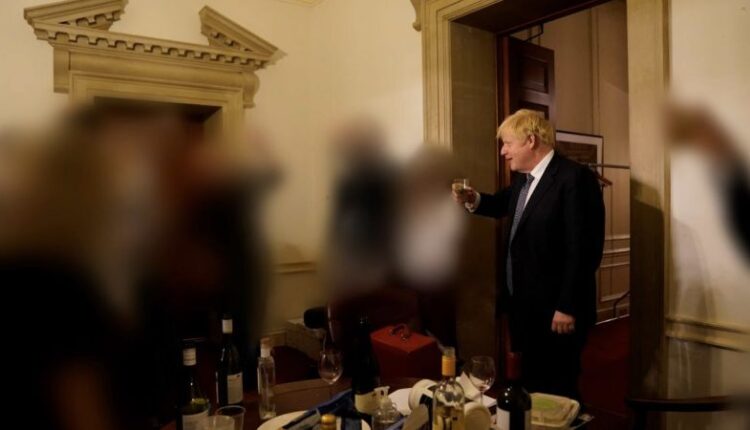 On Friday afternoon, a small but heated demonstration took place outside the gates of Downing Street.

The protest was sparked by a finding in the long-awaited “Partygate” report, conducted by senior civil servant Sue Gray, that custodial staff – including cleaners and security guards in Downing Street – were treated poorly by people attending social gatherings while the UK was in varying degrees of Covid restrictions – including full lockdown.

“I was made aware of multiple examples of a lack of respect and poor treatment of security and cleaning staff. This was unacceptable,” Gray wrote.

The report as a whole paints a damning assessment of the culture inside Downing Street and points the finger at Prime Minister Boris Johnson, who himself was found to have broken the law on one occasion for attending a gathering to celebrate his birthday.

Gray wrote that “the senior leadership at the centre” of Johnson’s administration “must bear responsibility” for a culture that allowed the parties to take place.

Despite the gory details of people vomiting on walls, brawling in the corridors of Downing Street and in many cases evidence that those inside the building knew what they were doing was wrong, Johnson’s job is not in immediate peril.

With the next general election not scheduled till 2024 and Johnson currently sitting on a hefty majority in parliament, it is only his own Conservative MPs that could sack the PM, something that in reality any potential rebels lack the numbers or power to do.

This sense that they are stuck with Johnson, whose personal approval ratings have been sinking since the start of the scandal last year, is freaking out Conservatives. They worry that Johnson has done irreversible damage to his own image in the eyes of most voters, who have finally seen “what he’s really like,” as one senior Conservative put it. The only thing left is for his reputation to now tarnish the rest of the party – something that opinion polls and recent election results suggest has started already.

“Ever since he took office, his larger-than-life personality has dominated the political agenda, which is a good thing when the public sees you as funny and affable,” says one Conservative MP and former cabinet minister. “The problem now is that the country has learned more about what that personality really is, but it’s still so huge it dwarfs everything else.”

A current government minister told CNN “there’s no doubt his image has gone from the happy-go-lucky Brexiteer to a liar who broke the law.”

Numerous Conservatives who spoke to CNN agreed that the damage to Johnson’s image is uniquely bad for a man who has been in the public eye for so long and with such a well-established set of strengths and weaknesses.

“We all have that friend who we know probably does bad things, but we don’t see them do those things, so we can pretend it’s not really that bad,” says Rob Ford, professor of politics at the University of Manchester.

“When we see the evidence of how bad they really are, it’s unsurprising but still gut wrenching. This is what’s happening with people who kept supporting Johnson. Their worst suspicions are being confirmed.”

Speaking in Parliament moments after the report was published, Johnson said he was “humbled” and has “learned my lesson,” adding: “I take full responsibility for everything that took place on my watch.”

But he also repeated previous claims that parties only escalated after he left, and insisted he was “surprised and disappointed” that several drink-fueled events took place – despite those happening in the same building as his own office and apartment.

And he suggested that the cramped quarters of the government buildings and the “extremely long hours” of his staff responding to the Covid-19 crisis could explain why several parties and social events occurred.

“I briefly attended such gatherings to thank them for their service, which I believe is one of the essential duties of leadership,” Johnson said.

As trivial as this might sound, Johnson has long held the image of Britain’s problematic mate. He was previously sacked from a job for making up a quote, and another for allegedly having an affair. He stretched the truth beyond recognition during the Brexit referendum. He comes across as indelicate and unapologetic. Which is great, until the public stops forgiving you.

“He’s always been able to escape the cliches previously applied to Conservative leaders of being elitist and out of touch. Somehow, he has avoided the caricature,” says Salma Shah, a former adviser to Conservative governments.

“Inevitably, tougher scrutiny is a given now that he occupies the highest office in the country,” she said. “What will hurt about the Partygate report, though, is that it really challenges the Boris brand as the popular jovial character and makes that cliche applicable to him.”

In the medium term, Conservatives are worried that they still have two years left with Johnson in power. “He’s become more divisive over time. I hope he reaches out to try and unite at least the party, but I fear his instinct is to dig in and lash out if things keep going against him,” says a senior backbencher.

Others pointed to previous difficult moments in Johnson’s premiership when he’d send out allies to defend him on news channels, only to U-turn on government policy and leave them looking ridiculous.

“Those who are still going to defend him over Partygate, in increasingly ridiculous circumstances, will over time be affected by the stain he’s spilled over the Conservative party,” says Ford.

“If the polls can be trusted, most voters are now convinced Johnson’s Downing Street is a place where vomiting and spilling wine, then being rude to the cleaners obliged to tidy it all up, is seen as acceptable behaviour. No MP wants to be tied to that,” Ford adds.

Previously, MPs said that they would wait for the Gray report before deciding whether to move against Johnson. Now, some are saying they will wait for an inquiry to determine whether or not Johnson lied to parliament.

The government minister who spoke to CNN says they believe the real moment of truth will come at two special elections taking place on June 23. “We could lose both of those elections to widely differing opposition, which I think most of us would take as a damning assessment of the party under Johnson. At that point, some of us will start to think about our own seats, I suspect.”

In the long run, people within the party will want a post-mortem on how Johnson came to be in power in the first place, given his flaws were known widely throughout Westminster.

Multiple current and former advisers who have worked with Johnson in various positions, in and out of government, describe him as a man who has a short fuse and seldom really believes he has done anything wrong.

Almost everyone who has previously worked for Johnson and spoke to CNN described at least one occasion on which he has snapped at his junior staff for putting him in a position where he was open to criticism from the media or his political opposition.

One former staffer attributes this to Johnson’s obsession with being liked. “It is no great surprise that he was previously a media figure,” they say.

“When you are a columnist, you can get away with saying whatever you want to make people find you funny. When you run a country and what you do actually affects people, you cannot demand that they love everything you do,” the former staffer adds.

Observations that Johnson’s personality is a box of contradictions are hardly new. He wrote columns that appealed to the Conservative right while playing the role of liberal mayor of London. And for a long time, playing both sides worked.

And indeed, Partygate could mark the end of Johnson’s plate-spinning act. He might stay in power a while longer; he might even fight – and win – re-election.

But there are very few who believe he can play the role of serious statesman during a global pandemic while also presiding over a culture where your staff organize illegal parties, vomit in the offices of government and are then rude to the people who mop it up – and remain universally popular while doing so.