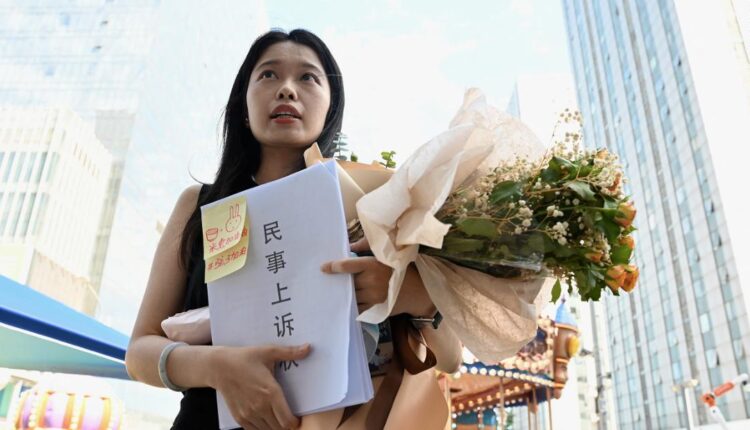 Zhou Xiaoxuan, better known as Xianzi in China, became the face of the country’s #MeToo movement in 2018, when she publicly accused CCTV host Zhu Jun of groping and forcibly kissing her in a dressing room four years earlier when she was a 21-year-old intern working on his show.

Zhu, who was 50 at the time of the alleged incident, denied the accusation and sued Zhou for defamation. She then countersued, sparking a years-long legal battle that coincided with a wider crackdown by the ruling Chinese Communist Party on feminist activism and online discussion of women’s rights.
Last September, a court in Beijing ruled against Zhou, citing “insufficient evidence.” In response, she accused the court of failing to ensure procedural fairness. Zhou said the judge had refused her repeated requests to retrieve corroborating evidence, such as security camera footage outside the dressing room.

On Wednesday, the Beijing Municipal No.1 Intermediate People’s Court rejected her appeal on similar grounds.

“The court held that the evidence submitted by the appellant Zhou was not sufficient to prove that Zhu had sexually harassed her, and that the appeal could not be substantiated,” the court said on its official Weibo account.

Zhou’s Weibo account has been blocked since last year — as have the accounts of many of her supporters.

Online trolls have accused Zhou of lying and “colluding with foreign forces” — a stock Communist Party phrase often used by nationalists to denounce anyone from dissidents and academics to health experts opposing the country’s zero-Covid policy.

Outside the court on Wednesday, police and plainclothes security agents cordoned off sidewalks to prevent Zhou’s supporters from gathering, with officers registering the national ID numbers of passersby.

A small group of supporters managed to greet Zhou on a nearby playground, handing her bouquets and holding up signs of encouragement. One of them read: “History and we the people are on your side, Xianzi!”

Others showed their solidarity online. Many shared a seven-minute video Zhou recorded on Tuesday, in which she urged supporters not to be disheartened.

“Putting up a fight itself is meaningful. It’ll have a bigger impact on society,” she said. “I never regretted stepping forward and bearing all of this. I hope you all share my belief that every effort is meaningful.”

But conversations about the case were heavily censored.

On Weibo, some posts about Zhou’s hearing were blocked, and Liang Xiaomen, a vocal Chinese feminist and public interest lawyer in New York, said her WeChat account was permanently banned Tuesday after she shared information about the case and voiced support for Zhou.

“Many voices supporting Xianzi have been banned online, while her critics and trolls are active as ever,” Liang said. “Many of her supporters are very anxious — (our online community) was broken up and we don’t have a place to come together and form a united voice.”

When Zhou took the case to court in 2018, she sued Zhu for infringement of “personality rights” because China did not specify sexual harassment as a legal offence.

The code states that an individual can bring a civil claim against a person who engages in sexual harassment toward them “in the form of verbal remarks, written language, images, physical behavior or otherwise,” against their will.

Despite the code’s introduction, Liang said Zhou’s case illustrated how survivors of gender-based violence in China can still face grueling legal battles. “This case is a bloody testament to how the Chinese judicial system views a victim of sexual harassment and those who are willing to come forward and take legal action,” she said.

“If I didn’t start the lawsuit myself, I might never know what kind of injustice other victims of sexual abuse would suffer after entering the [judicial] system,” Zhou said in her video to supporters. “We’re still in an environment where we have to sacrifice our feelings, sacrifice our pain in exchange for understanding.”

Stepping out of the court after the hearing on Wednesday evening, Zhou told supporters that this was likely the last legal effort she could make in the case.

“After the hearing, the judge told me that since I called the police in 2014, eight years have passed, and I should have my own life plan. But what I want to say is that my life plan is to devote myself to this case and hope for a good result. Now I can’t carry on that plan anymore,” she said.

“The judicial system does not have innate authority, nor is the court’s judgment inherently the truth … I hope that the next litigant who comes to this courtroom will gain more understanding from others.”