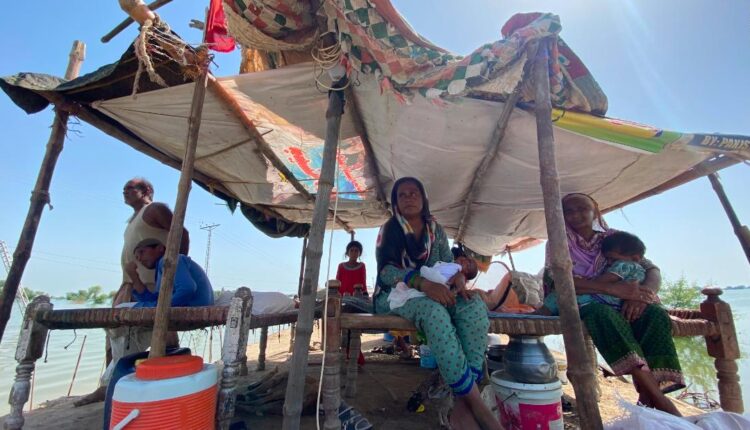 The family of eight built their shelter from furniture and sheets of cloth, whatever they could salvage from their flooded home in the village of Rijepur, near Khairpur Nathan Shah in southwestern Sindh province.

Holding her 24-day-old infant, Shumaila, Solangi said she worries about her newborn, who she took from hospital as the rain fell because she couldn’t afford to pay for her medication. Now she and her five other children are hungry, ill and wary of the snakes that are also looking for food and higher ground. Her husband, a daily wage earner, is not able to work.

“All those who could afford left this village, but we are still here because we cannot afford to go anywhere. It’s all about money,” she said. “We are helpless people. I am also sick and it’s the third month I got fever and throat infection. We even cannot afford to buy some medicine.”

Around 10% of the country’s healthcare institutions have been damaged by the floods, WHO representative to Pakistan Dr. Palitha Gunarathna Mahipala said Monday. He said he’s especially concerned for the 1.2 million pregnant women who among the hundreds of thousand of displaced people.

Solangi may have survived her baby’s birth, but she knows a strip of land between flood water is no place for an infant. Though she said she feels safer there than in a nearby relief camp that’s only accessible by boat.

“There is nothing in the relief camp,” she said. “People are helpless. They don’t give anything to people. It’s better to live here,” she said.

Across Pakistan, others like Solangi are surviving on rations dropped by aid workers as they wait for the waters to recede. Around 10 families are huddled together with Solangi on the strip of land that’s at some points is only 15 feet, or less than five meters, wide.

Flies swarm around the children’s faces as they sleep, and it’s hard to avoid the mosquitoes which carry the threat of malaria, which can cause fever, flu-like symptoms and sometimes death.

“A lady came here and promised that we will be provided mosquito nets but she never came back,” Solangi said. “I am still waiting for that. They also registered my name but she didn’t return.”

Mahipala said the WHO was seeing “malaria of epidemic proportions” and that cases of typhoid and infections of the skin, eyes and respiratory tract were becoming more common.

“We fear that situation will worsen with the greater humanitarian and public health impact particularly in Sindh province as water moves towards south of the country,” he said.

The WHO estimates that around 634,000 people are living displaced persons camps, but that number could be higher because it’s too difficult to access some areas.

‘We are poor and cannot go out of this area’

On the dirt strip, children mingle with the livestock families saved from the floodwater, and amuse themselves by splashing in the water that now covers their small village.

Mai Haleema, 70, watches over them, but particularly when they sleep. She’s worried the younger children will forget where they are and accidentally fall into the water that’s lies just a few feet from their beds.

“We keep our eyes on our children after sunset. They could fall down in the water believing if they were living in their old house. We have to take care of them,” Haleema said.

Haleem told CNN that she has witnessed Pakistan’s harsh monsoon season throughout her life, but this is one of the worst.

“This area has been hit by floods four times in my life, but I remember three of them. But this time, the heavy rains worsened the situation. The water level was not so high in the past,” Haleema said.

She worries about the future, but doesn’t think too much about her damaged home — “It is useless to cry for it now,” she said.

She and Solangi are more worried about the children, and how they’ll survive this ordeal.

“We have to save food for our kids,” said Haleema. “God may help us.”

Solangi is also hoping for divine intervention to save them from a disaster that no one saw coming.

“God is our savior. I am not feeling well,” she said. “My kids are also sick. I have to fetch water.”