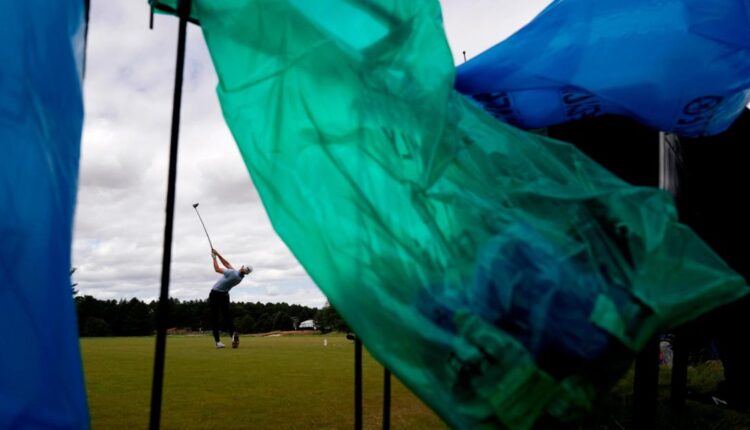 As heavy winds in Brookline wreaked havoc across the field, the picture at the top of the leaderboard was blown wide-open, with Will Zalatoris and Matt Fitzpatrick sharing the lead at four-under par heading into Sunday’s deciding round.

Blustery conditions — a subject in every post-round news conference — contributed to an array of helter-skelter scorecards, with a mere 10 of the 64-man field scoring at least par, and only seven carding under. It means just four strokes separate the leading duo from Nick Hardy in 10th place.

Reigning champion Jon Rahm had looked poised to end the day in pole position to defend his crown, surging through the penultimate four holes before double bogeying the 18th to leave him one stroke off the leading pair.
The Jekyll and Hyde round of Scottie Scheffler epitomized the day. Having sped into the lead with a blistering front nine featuring two birdies and a stunning eagle, the world number one endured a dismal stretch of a double bogey and three consecutive bogeys after the turn.
He ended the day two shots off the lead at two-under, joined by compatriot Keegan Bradley and qualifier Adam Hadwin, the surprise early front-runner from Thursday’s opening round.
Co-leader heading into Saturday had been Collin Morikawa, who became one of the biggest casualties of the Brookline winds. After posting 69 and 66 through the first two rounds, the American shot two double bogeys en route to carding a 77, leaving him six strokes off the front.
Morikawa’s co-leader at the start of the day, Joel Dahmen, fared better despite also dropping down the leaderboard, shooting a 74 to end the day three strokes off the summit alongside Sam Burns and Rory McIlroy.

Ranked 14th in the world, Zalatoris starred with a round-best 67. The American has come agonizingly close in recent years, missing out on the Masters by a stroke in 2021 before suffering a playoff defeat to Justin Thomas at the PGA Championship in May.

Having already labeled The Country Club course as the hardest he’d ever played regardless of the weather, Zalatoris revealed conditions were so “brutal” he didn’t aim shots at any of the hole’s flags.

Now 18 shots from glory, the 25-year-old believes he has what it takes to get over the line.

“Coming off the PGA [Championship] it gave me a lot of belief and confidence that I belong in this situation,” Zalatoris told reporters.

“There’s a difference in thinking it, and then actually being in the situation and believing it … I’ve put myself in this situation a few times in my career, and obviously have to go out and get it tomorrow.”

World number 18 Fitzpatrick carded a two-under 68 to join Zalatoris at the summit. Though the Englishman is also without a major to his name, he has experience of winning at The Country Club, having won the US Amateur in Brookline in 2013.

He has since racked up seven European Tour wins, but admitted his career would feel “incomplete” if he retired without tasting major glory.

“I genuinely would be disappointed if I didn’t,” Fitzpatrick told reporters.

“I definitely feel like I have much more of a chance now to win a major than I ever have done in my career.”

Sunday’s deciding round is set to begin at 8:49 a.m. ET, with pairs’ tee off times staggered in ascending order up the leaderboard. Fitzpatrick and Zalatoris will be the last duo to tee off at around 2:45 p.m. ET.

Windy woes for Rahm and Scheffler

Rahm, the first Spaniard to win the US Open with victory at Torrey Pines in 2021, was left with the paradoxical feeling of being both “very content” with his performance and ruing a late collapse.

Discussing the blustery conditions, the 27-year-old said he would “run to the clubhouse” if offered a one-over par to skip the last five holes.

“It’s infuriating in a sense to finish that way with how good I played those holes,” Rahm told reporters.

“I have 18 holes, and I’m only one shot back. That’s the important thing.”

Scheffler also chose to adopt an upbeat mood despite the effect of the elements on his round. Enjoying a spectacular 2022 with victory at the Masters and three further PGA Tour wins, the 25-year-old showed his class to steady the ship after a terrifying stretch, closing with three pars and a birdie.

“That little golf ball is just getting thrown around all over the place,” Scheffler told reporters, before discussing what a win come Sunday would mean to him.

“If I do, it’s going to be really fun. If I don’t, life will go on,” he said. “Hopefully this won’t be my last US Open, but you never know. Can’t take anything for granted in this life.

“So I’m going to approach tomorrow the way I always do and just go out there and try and do my best and see what happens after that.”