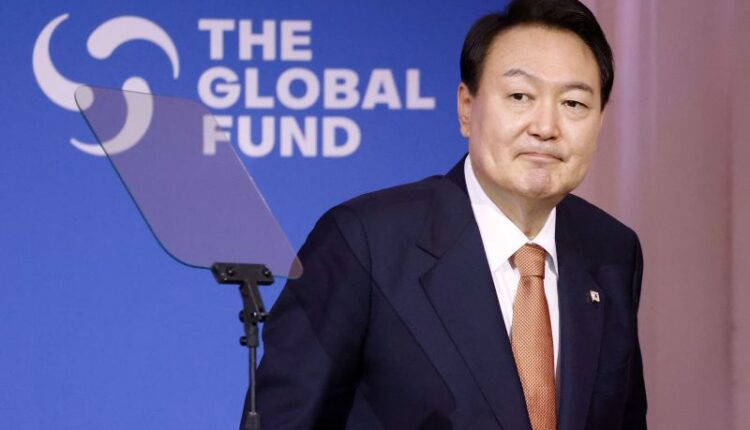 A criticism used on US lawmakers by the President of South Korea has gone viral on social media – after a hot mic picked him up using an expletive.

Yoon Suk Yeol appears to have made the remark after meeting US President Joe Biden at a conference for the Global Fund in New York on Wednesday.

In a video published by South Korean television broadcaster MBC on its official YouTube channel on Thursday, Yoon can be seen walking along the stage after chatting with Biden before turning to his aides and speaking.

“It would be so embarrassing for Biden if those f***ers at the National Assembly don’t approve this [bill],” he then appears to say.

The Global Fund is an international organization trying to defeat HIV, TB and malaria across the developing world and Yoon’s remark appears to be a reference to Biden’s pledge to contribute $6 billion, which would require Congress approval.

The YouTube clip – which has not yet been taken down – has been viewed more than four million times since it was uploaded and drawn tens of thousands of comments.

Many social media users have taken to mocking Yoon, while the expletive he used has become a popular search term on the South Korean online portal Naver.

This is just the latest in what critics say is series of diplomatic miss-steps by Yoon, who arrived in New York this week for the United Nations General Assembly after attending the funeral for Queen Elizabeth II in London.

While in London, Yoon’s opponents accused him of disrespect because he missed the chance to view the queen’s coffin lying in state – which he blamed on heavy traffic.

Last month, he came under fire for failing to meet US House Speaker Nancy Pelosi when she visited South Korea as part of a tour of Asia.

Following what appears to be his latest foreign policy gaffe, Yoon’s team have gone on the defensive.

In a background briefing with reporters, a high-ranked official for the South Korean Presidential Office said the remark was “a private comment” and it was “inappropriate to connect a private comment to a diplomatic outcome.”

The official also said that “it was regrettable” Yoon was being criticized while keeping up with “a tough schedule for the benefit of national interest.”

“There’s no reason for him to speak about the US here,” Kim Eun-hye, Yoon’s senior press secretary, said in a separate briefing, reiterating that many people appeared to have “misheard” his words.

Back in Seoul, South Korean Prime Minister Han Duck-soo addressed the issue at a National Assembly session on Thursday, saying it was “unclear” what Yoon had actually said.

“I don’t think I can make a clear conclusion here about the circumstances in which he said those words… but it seems that no one has clearly heard the content,” Han said.

His remarks were not lost on members of the opposition liberal party who commented on the issue at Thursday’s National Assembly.

“Diplomatic disasters are recurring under the Yoon Suk Yeol administration and this is due to the repeated diplomatic incompetence of the President,” they said.