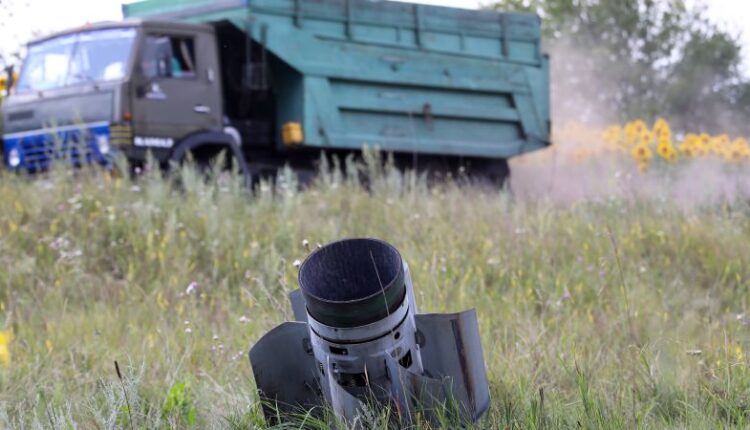 A general view shows the Zaporizhzhia nuclear power plant, situated in the Russian-controlled area of Enerhodar, seen from Nikopol in April 27, 2022.

Concerns have mounted after the British Ministry of Defense echoed accusations from the Ukrainian military that Russian forces are using the Zaporizhzhia nuclear power plant in Ukraine to fire at military positions across the Dnieper River, but Western officials have downplayed the danger.

Russian forces are probably operating in the regions adjacent to the power station and have used artillery units based in these areas to target Ukrainian territory on the western bank of the Dnipro river,” UK’s Ministry of Defence (MOD) said in its latest update on the situation in Ukraine.
“Russian forces have probably used the wider facility area, in particular the adjacent city of Enerhodar, to rest their forces, utilizing the protected status of the nuclear power plant to reduce the risk to their equipment and personnel from overnight Ukrainian attacks.”

The MOD’s assessment echoes accusations made by the mayor of the Russian-occupied town of Enerhodar, Dmytro Orlov, who said in late July that Russia was using the plant as a fortress. “They (Russian forces) know very well that the Ukrainian Armed Forces will not respond to these attacks, as they can damage the nuclear power plant,” Orlov told Ukrainian broadcaster Espreso TV.

A mixed picture: On Thursday, Western officials downplayed the likelihood of intense combat in and around the nuclear power plant.

“Russia might use the site as a safe zone, from which to carry out defensive operations. Ukraine will consider very carefully how to avoid taking major risks around the site,” the officials said.

“The area of the site itself of nuclear power plant is too small an area to be very significant in terms of an advance. It could always be surrounded or bypassed by Ukraine,” the officials added. “It’s a consideration and something that people need to be careful in their planning around but is in no way going to prevent an advance.”

The MOD’s concerns come after the International Atomic Energy Agency (IAEA) director general Rafael Grossi told The Associated Press on Tuesday that the situation at the plant was “completely out of control.”

Grossi said he was trying to put together a mission, with the support of the United Nations Secretary General António Guterres, to visit the plant, but explained actually going was a “very complex thing,” because “it requires the understanding and the cooperation” of the Ukrainians and the Russians occupying it.

Some background: Russia seized the plant, which is the largest nuclear plant in Europe, in the early days of the war on March 5. A week later, on March 12, a team of officials and technicians from Russia’s state nuclear agency, ROSATOM, arrived on site to help manage the plant and help with repairs, Ukraine’s nuclear agency, Energoatom, said.

The situation at the plant has remained complex ever since, with Ukrainian and Russian staff working alongside each other. Communications between the plant and the IAEA has been intermittent.

Military operations in the area, with an announced Ukrainian counter-offensive to take Kherson have made the situation even more volatile, the IAEA has said.

While Western officials understand some of the IAEA’s concerns, they “don’t think [the situation] is as dire as it is necessarily been painted in the media at the moment.”

The officials went on to explain that plants like the one in Zaporizhzhia are built with multiple safeguards in place. “So please don’t think that we’re looking at Chernobyl like situation, that’s not the case,” officials said. “We think overall, the circumstances of that site are still okay.”

CNN reached out to Rosatom for comment but has yet to hear back.