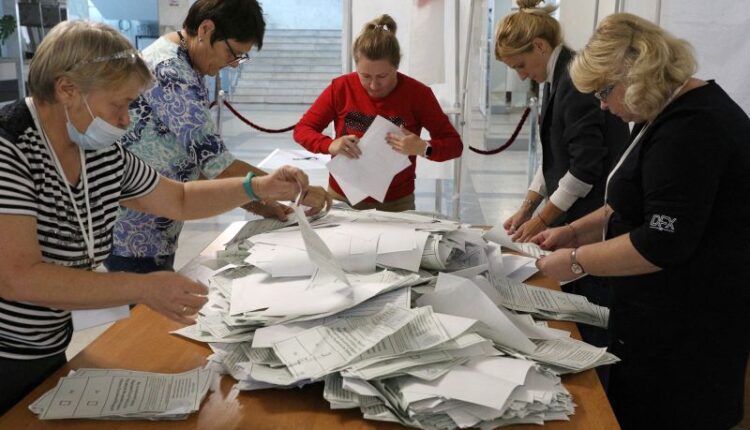 President Vladimir Putin is set to sign agreements Friday that will absorb into Russia thousands of square miles of Ukrainian territory in what will be the largest forcible annexation of land in Europe since 1945.

The agreements will be signed at a ceremony at the Kremlin, three days after hastily-conducted referendums concluded in the four areas of Ukraine that Moscow will now consider Russian territory.

Putin will deliver a speech and meet with Russian-backed leaders of the four occupied regions, according to the Kremlin.

Ukraine and its western allies have categorically rejected the planned annexation of the four regions – Donetsk, Luhansk and much of Kherson and Zaporizhzhia, a swathe of Ukrainian land that contains heavy industry, rich farmland and a critical freshwater conduit for Crimea.

Donetsk and Luhansk are home to two breakaway republics that Moscow has backed since 2014, while Kherson and parts of Zaporizhzhia have been controlled by Russian forces since shortly after the invasion began in late February.

Ukrainian President Volodymyr Zelensky has asserted that if the Kremlin presses ahead with annexation, any negotiation with Putin will be impossible.

In all, Russia plans to raise its flag over some 100,000 square kilometers (38,600 square miles) of Ukrainian territory in what is a flagrant breach of international law and after votes dismissed by the great majority of countries, including some friends of Russia like Serbia, as null and void.

While the international community will reject Russia’s plan almost in unison (expect a few outliers like Syria and North Korea), annexation does change the “facts on the ground” and diminishes the prospects for any negotiated settlement.

There’s a huge difference between withdrawing from occupied land (as the Russians did in April when they pulled back from much of northern Ukraine) and giving up areas that has been formally and ceremonially absorbed into the motherland – especially for a leader like Putin who is fixated with a “greater Russia.”

Indeed, former Russian President Dmitry Medvedev said last week that once the so-called republics were integrated into the Russian Federation, “not one future leader of Russia, not one official will be able to reverse these decisions.”

And once the Russian flag flies over these areas, they qualify for the same level of protection as any other part of the Russian Federation, as Russian Foreign Minister Sergey Lavrov stated Saturday.

As Alexander Baunov at the Carnegie Endowment put it last week, the message from the Kremlin to Ukraine’s allies is this: “You chose to fight us in Ukraine, now try to fight us in Russia itself, or, to be precise, what we call Russia.”

The second part of that message – spelled out in Putin’s speech announcing partial mobilization – is that any attack on what is considered Russian territory invites the full range of retaliation.

In 2020, Putin signed a decree updating Russia’s nuclear doctrine that allowed for the use of nuclear weapons “in the case of aggression against the Russian Federation with the use of conventional weapons, when the very existence of the state is put under threat.”

The definition of that threat is not exactly clear, but last week Putin issued his most explicit warning yet: “The territorial integrity of our homeland, our independence and freedom will be ensured, I will emphasize this again, with all the means at our disposal. And those who try to blackmail us with nuclear weapons should know that the prevailing winds can turn in their direction.”

To most observers, such dire warnings are a desperate gambit. US officials have said that they don’t believe Putin would resort to tactical nuclear weapons, though they cannot discount the possibility.

The threat is certainly “elevated” compared to earlier in the year, multiple sources told CNN Wednesday. The US in recent months has been privately warning Russia not to take such a catastrophic step.

But so far, there are no signs that Russia is imminently planning their use and the “general assessment hasn’t changed,” one source familiar with the intelligence said.

Putin may also be hoping that ceremonies annexing new territory will solidify public opinion behind his goals, after a week in which complaints and protests about the poorly executed partial mobilization have spread.

He enjoyed stratospheric approval ratings after Crimea was annexed after a similar so-called referendum in 2014, but much has changed since. Russia is weighed down by sanctions (and the annexation process will bring more) and has suffered at least 70,000 casualties in Ukraine, according to ​US and NATO officials.

Anatol Lieven, director of the Eurasia Program at the Quincy Institute, told CNN last week that Putin’s real goal is “to persuade the US and/or Europeans to get serious about negotiating a compromise settlement to end the war by showing that otherwise, Russia will take radically escalatory steps which will not only force the West to escalate in turn, but will also rule out any possible peace for a long time to come.”

If that is the case, Putin may be disappointed. There’s no sign of Ukraine or Western governments heeding such a warning. The US has just announced another batch of high-tech weaponry for Ukraine, including more HIMARS long-range artillery systems, which have transformed the battlefield.

And Ukrainian forces, far from thinking twice about the greater risk of attacking areas now considered by Moscow as its own, are accelerating an offensive in Donetsk region. Pro-Russian forces in and around the town of Lyman are on the verge of being surrounded.

If they are forced to surrender territory in the heart of the Donbas, which will within days be regarded in the Kremlin as Russian land, it will be an early test of Putin’s freshly drawn red line.

Ulrich Speck, an analyst with Carnegie and RFE, tweeted Thursday: “If there are no clearly delineated borders, the threat to defend ‘Russian borders’ in Ukraine even with nukes quickly loses credibility and becomes irrelevant for the fight.”

And Jon Wolfsthal, a former arms control official in the Obama administration, said in a tweet: “Putin has given us a choice – accept the redrawing of border through force and avoid nuclear threats (for now) or reject sham referendums and help Ukraine preserve itself and nation-state concept and accept nuclear risks.”