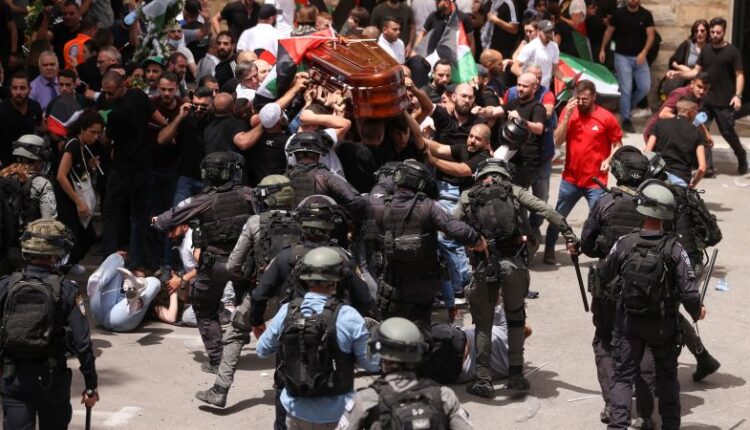 Police forces came under widespread criticism following the procession, in which television footage showed officers striking mourners with batons, nearly causing the pallbearers to drop the coffin, as well as forcibly taking down Palestinian flags including from the hearse, and arresting individuals carrying the flag.

At the time Israeli police said they were responding to objects and rocks being thrown at police, as mourners sought to carry Abu Akleh’s coffin by foot from a Jerusalem hospital to a church in the Old City. Police said they had secured prior agreement from the Abu Akleh family to transport the coffin by car – which is eventually what happened, though only after chaotic scenes.

Instead of releasing any details of the investigation, or any findings, police issued only a statement, in which Israeli Police Commissioner Kobi Shabtai acknowledged Abu Akleh’s funeral had been a “complex event,” adding, “it is impossible to remain indifferent to the harsh images.”

Shabtai said police had examined the conduct of the forces on the ground, but he appeared to blame funeral participants for the way events unfolded: “We must thoroughly learn [the lessons from] the incident, so that in the future sensitive events such as these will not be disturbed by violent rioters, and will be respected.”

Israeli media has widely reported that no police officers on duty, or their commanders, will be penalised for their actions.

In the statement Shabtai offered forces his support, saying, “I trust the actions of Israel Police officers, who will continue to reliably work for the safety of the entire public.”

The Israeli police came under harsh criticism after the procession, with the White House calling the images “disturbing” and US Secretary of State Antony Blinken saying he was “deeply troubled by the images of Israeli police intruding into the funeral procession.”

CNN has asked police when they plan to release their investigation but has not received any reply.